There's at least a 2% probability that the Texans struggles this season are due in part to the fan base not being able to generate enough hatred for the opponent. That ends now.

BRINGIN' BACK THE HATE

You may remember that MDC created this Pregame last year in order to remind you why you should hate everyone other than the Texans. Well, you loved it and I loved it, and let's be honest, we've all suffered enough. So, with MDC's blessing, I'm bring back the hate, though I may throw a little Vega twist here and there. Besides, I'm pretty sure I read at some point that the best remedy for an angry mob is to feed the anger and channel the aggression towards someone who really deserves it.

Unfortunately, the timing here is less than ideal, and I can't help but feel like we're all missing out a bit. I mean, nobody, hates the Chiefs more than MDC, though in fairness, few people really have an opinion of the Chiefs or even remember that they still play football in Kansas City. Perhaps MDC has said opinion because he lived there for ten years and went to college there, but from my perspective, if I ask most people what they think of Kansas City, the general response is, "Wait that's the place that isn't in the place that it sounds like it should be in, right?"

If I ask specifically about the Chiefs, the consensus is more along the lines of, "They suck, right?" It's interesting that even in a season where Kansas City is experiencing a sort of football renaissance -- with the appropriate parallel including the Sistine Chapel recreated in crayon, or the David molded in Play-Doh -- does anybody really believe that they're a legitimate contender?

Look, the simple fact of the matter is that nobody really cares about Kansas City. It's a forgotten place that likes to pretend that it's not part of Missouri.

The thing that Kansas City is most proud of is the fact that they claim to have more fountains than any other city outside of Rome. They're so proud of this that they're referred to as "The Fountain City." That's like bringing someone over to your house and bragging about the sprinkler system.

Kansas City is also known as "Paris of the Plains" as they apparently have more boulevards than any city other than Paris. Look, I'm no travel expert here, but when your claim to fame is fountains and boulevards, what you're really saying is that your Lonely Planet guide is essentially a one page brochure saying, "We got nothing."

At the end of the day, what Kansas City is really telling the world is that they would like to pretend that they're a classy city comparable to the great cities of Europe and not a plain city in the most boring section of the United States. They forgot one crucial fact: It's just not true.

1. Scenes from a Memory. As I mentioned above, nobody hates the Kansas City Jefes more than MDC, so I felt he had to have some input here. Here are his thoughts:

Chiefs fans are the kind of mouth-breathing jagoffs who will buy a red car then (poorly) hand-paint a Chiefs logo on the door because that somehow makes them more "real" than the fans who use magnetic logos. They own more Zubaz pants per capita than any other fanbase, and they wear them unironically all year. They act like Arrowhead Stadium is this amazing place when, in reality, it's a generic concrete bowl out on the fringe of the suburbs, devoid of any charm unless you are are the kind of person who finds parking lots and chain motels charming. They literally cheered when Matt Cassel got injured, because that meant Brady Quinn would get to play, ignoring that Brady Quinn makes T.J. Yates look like Tom Brady. They talk about their "storied" franchise, as if it's on par with the Steelers or has even been relevant for more than a few minutes over the last 15 years. They are, basically, what Ravens fans would be in 40 years if the Ravens didn't win another Super Bowl in the interim.

2. Perspective. The 6-0 Chiefs have so far feasted off the following NFL powerhouses: Jacksonville, Dallas (by 1), Philadelphia, New York Giants, Tennessee (with Ryan Fitzpatrick at QB), and Oakland. Let's see... carry the one... and... yup, that's a group that has gone a combined 11-25 for a .306 winning percentage. There's not a single winning team in the bunch and it includes two of the three remaining winless teams. Oh yeah, and this is the same team that went 2-14 last year. Coming into this year, the Chiefs had won fewer games than the Texans since Bob McNair brought football back to the Bayou City, and they weren't saddled with expansion team restrictions or David Carr. Maybe we should hold off on planning the parade through all those boulevards and around all those fountains.

3. Getting the Kitten Out. Taking a glance at Wikipedia's list of notable people from Kansas City (which includes people born in KC or who spent time in KC or who once stopped for a sandwich in KC), some of the more notable names are Walter Cronkite, Eminem, Walt Disney, Amelia Earhart, Ernest Hemingway, and Harry Truman. While famous for different reasons, they all share the common thread of being famous for stuff they did after they got the F out of Kansas City.

I'm bringing this feature and Beer of the Week in from Hair of the Dog because I think they were getting buried under waves of sadness there.

This week we're steering clear of barbeque for fear of accidentally honoring something Kansas City related. Instead, we're going to celebrate my wife's heritage by going Italian. We're going to do something we haven't done in a long time: gnocchi.

Gnocchi's are perfect puffy pillows of potato pasta (though it's not actually pasta... just got a little alliteration happy). If you've never had a good gnocchi, I highly recommend you order it next time you're at your favorite Italian restaurant. If you want to make your own, though, it's not particularly difficult, just very time consuming.

A basic gnocchi starts with boiled potatoes that have been boiled and smashed up. Add flour, egg, salt, oil and nutmeg (most online recipes are pretty good and only vary slightly), and make a potato dough. Roll out into snakes and cut up tiny pillows about an inch long. Boil these up and you have gnocchi.

At this point you can saute them in browned butter with some sage or bake them with marinara and mozzarella. Our preference, though, is usually to toss them with some homemade pesto. Awesome.

THREE OF THESE STATEMENTS ABOUT KANSAS CITY ARE MOSTLY TRUE

1.Oral sex is illegal in Missouri. Insert your own joke here about how the Chiefs have been blowing for years.

2.The first confirmed European in the area that would become Kansas City was a Frenchman who sold illegal furs and was on the run from French authorities for abandoning his post at Fort Détroit. Everything went downhill from there.

3. In 1981, the Hyatt Regency walkway collapsed during a tea dance, tragically killing all 114 Americans who ever wanted to attend a tea dance.

4. Warren Moon said that finishing his career with the Chiefs made for an oddly appropriate career bookend opposite his time in the CFL.

"It isn't necessary to have family in Kansas City in order to be unhappy." --Groucho Marx

This week's beer is Sweetwater 420 from the Sweetwater brewery out of Atlanta, GA. I'm not sure why they call it 420, though I can offer a guess, and I bet I'm right.

420 is a pale ale and has become my beer of choice after my weekly soccer game. Like any good pale ale, it's got a crisp finish and a nice hop character from the cascade and centennial hops, but what makes the 420 special is the great malty character that it gets from the Munich malt.

Most pale ales are nice and crisp, but it's rare to find one with this much flavor out of the grain bill. For that reason, Sweetwater 420 is currently my favorite pale ale. 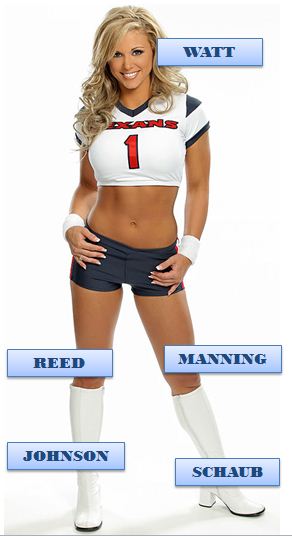 J.J. Watt (Gladiatoritis). I'm pretty sure that Watt injures himself because a full strength Watt would damage the fabric of space time and cause the universe to explode. He's so charitable.

Ed Reed (2012 Hangover). Reed is contractually obligated to be injured for the Texans.

Danieal Manning (Plays Too Close to Reed) Manning's year is over as he comes to the realization that he could have still been playing next to Glover Quin.

Matt Schaub (Waiting For Keenum's Pick-Six). The vilification of Schaub around Houston is worse than any injury he may be suffering, so he may be nursing this one a bit.

Justin Houston (Not as good as the real Houston) - Probable