Coaching legend and Houston icon Bum Phillips passes away at 90. 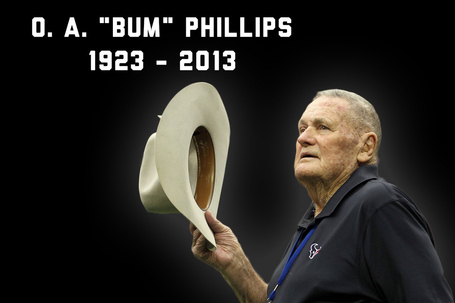 Bum Phillips passed away this evening at 90 years old.  Among those with him at passing was former Oilers TE Mike Barber.

Bum on his given name Oail:

Cain't nobody spell it or pronounce it or anything.

I still remember where I was when Bum was fired by Beelzebud: Raton, NM across the street from a Taco Bell.  I stared at the Taco Bell for a while, wondering if it was possible to fire the owner instead of the coach.  Even back then, NOBODY liked Bud Adams, and just about everybody loved Bum Phillips.

And then it just had to be a dream.  Nobody could be so damn stupid to fire Bum, not the man who had helped give the team a personality, turn the team around, and lead it into the playoffs.  Alas, Beelzebud proved to be precisely that dumb.

There's no way to overstate Bum's importance on football in the city of Houston.  Bum turned Houston into a football city, garnering respect and adulation through hard work and a special brand of Texas humility.  Bum, helped by his son Wade, turned a moribund franchise into one feared by the league, especially defensively.

Teams will know they've been up against us - bruise-wise.

Bum is gone to Heaven-loved and will be missed by all -great Dad,Coach, and Christian

Later in life, Bum started a charity, one which I've given to.  If you're so inclined, please consider giving to Bum Phillips Charities.

Rest in peace, Bum.  My heart's broken tonight.  Much love to you, and my best to your family.

A special on Bum Phillips: