In this post, we look at the Texans' upcoming opponent and determine what completely arbitrary things we should hate about them. Why? Because it's funny, and I have unresolved anger issues.

Share All sharing options for: Two Minutes Of Hate: The Indianapolis Colts

You know how you have one of those days where nothing seems to go right? Where you step in gum the minute you walk outside your door to go to work? Where a whole bunch of piddly crap makes you want to punch a panda in the stomach? Well that's how this entire season has felt for me so far. And on days/seasons like that, I need to irrationally lash out at whoever happens to be closest to me. I need two minutes to vent off steam, to make someone else wish they'd never gotten out of bed either. I need two minutes of pure unadulterated hate. And this week, the Colts are the nearest target.

WHY WE SHOULD HATE THE COLTS:

We have to start with Andrew Luck. First of all, have you seen that horrific looking thing on his neck? I mean, look at it.  Just look at this monstrosity. 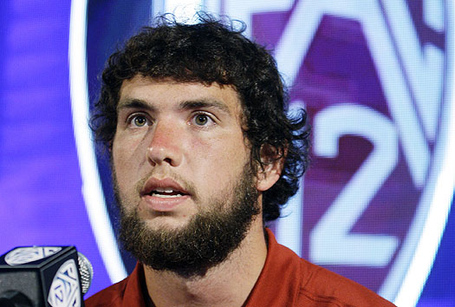 I know it's an old picture, but this is no time to argue about that! It's frightening, isn't it? That's the kind of thing that will send kids screaming for their parents. It looks like his neck killed a weasel and is having trouble swallowing it. If you wanted to build a haunted house for Halloween, all you would need to do is put up an image of Luck's gullet mullet and pepper it around. One picture would send them running. Several of them would probably induce lifelong therapy sessions. It's the kind of personal grooming option that people emigrate to avoid. I sometimes wonder if his beard were to ever meet James Harden's beard, what would happen?

Then there's the screaming he does during the game. He howls like a bonobo chimp going through the mother of all acid trips. Female tennis stars don't scream as much in one tournament as Andrew Luck does in a single offensive series. Listen, I understand you're the successor to Peyton Manning and the official ESPN-annointed saint of football yet to come. That doesn't mean I want to hear your Paleolithic "Captain Caveman" voice calling signals and screaming audibles like you're Ol' Horse Face himself. Just stop it. It's distracting me almost as much as your neck ferret is when it starts sniffing around the center looking for its midday meal, and frankly I don't need that.

Speaking of acid trips, just how strong was the acid that Colts GM Ryan Grigson was on to trade a first round pick for Trent Richardson? I get that the Colts are trying to be some power running offense.  That's just adorable. But Trent Richardson has all the 2.4 YPC of Chris Johnson and none of the speed that actually makes him a threat; that is, unless you place a cheeseburger in the end zone.  Then all bets are off.

Also, shame on Grigson for giving Cleveland a first round pick in that deal. He ought to know by now that Cleveland can't be trusted with draft picks. And here he is enabling them and prolonging the factory of sadness. It's incredibly irresponsible, and he's the only enabling them to continue that behavior.

And then you have the new titleholder for the "most insane owner in the NFL," Jim Irsay. 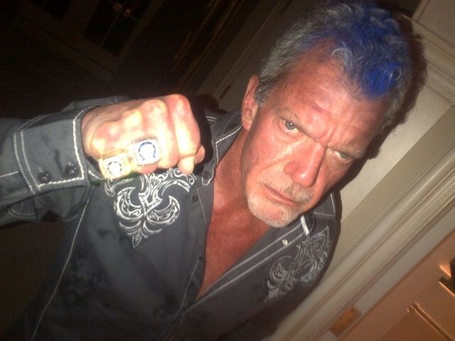 Does this look like someone who should be at the head of a multi-million dollar enterprise like a football team? Hell, I don't trust him with something as simple as a running a contest on Twitter without causing some kind of international incident. But then what do you expect from a family that's willing to skulk out of town in the dead of night, without giving those fans so much as a chance to hurl obscenities at them? I get why Papa Irsay did it.  It's still the kind of thing a crook would do, slinking off like a burglar after a big heist.

Back to the current crooked Irsay-in-chief.  He looks like he should be huddled up in newspapers and threadbare blankets asking for change. Colts fans should thank their lucky stars he fell ass backwards into not one but TWO franchise-caliber quarterbacks, or he'd probably make like his old man and move the team to Los Angeles, or someplace really God-forsaken like Oklahoma.

Whew, I feel so much better now.