The Texans extend their losing streak to SEVEN, and Capt Ron chronicles the latest game against the Arizona Cardinals. 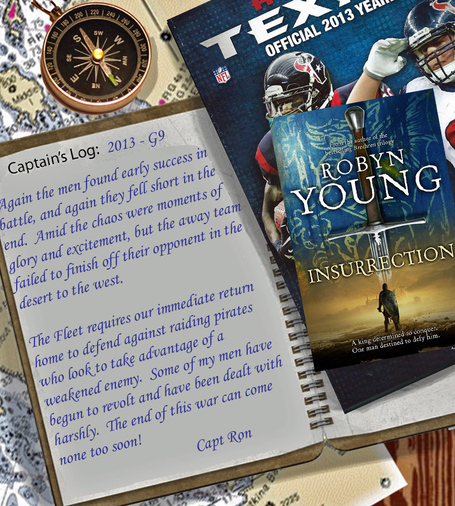 "If you have an insurrection lasting longer than four hours, cut the veteran free agent!"  - Capt Ron  #Bamboozled

I'm going to cut right to the chase.  This season sucks! It has been more like watching a poorly written dramatic series, but the only available viewing source is dubbed in a language you don't understand and the subtitles crawl faster than you can read. Notwithstanding high expectations for a good show, you settle in with hopes it will improve, only to see them kill off some of your favorite characters before canceling the series completely. I seriously hope that in future seasons, there are NO analysts suggesting that the Texans are destined for anything great. They tend to do much better as underdogs. After twelve seasons of heartbreak, Texans' fans will forever be hesitant about setting expectations again. We do still love this team and have been through the worst together. Someday we will see a championship.  When we least expect it.

We'll never know if there was any type of mild uprising within the locker room by some individuals out of frustration, but it was evident that some players were starting to separate themselves from the organization and/or other players after this loss.

"I really don’t have an answer for that question. Like I said, a lot of people have opinions about what should or shouldn’t be done and those kinds of things."

Now that all the pressure is off, I hope the coaches take the remaining games and insert the younger players for good evaluation and also to build experience. Brandon Harris actually made some great plays in this last game, and there's renewed hope that he can replace either Brice McCain or Johnathan Joseph next year if he keeps demonstrating good coverage skills. As for the fans, now it is really about watching the games just to experience some "fun" football. Let's hope nobody gets a major injury from here on out, and that we see some exciting plays along the way.  Case Keenum and 'Dre are certainly doing their best on offense, while J.J. Watt and D.J. Swearinger are flashing on defense. There is a lot of fun action for fans to keep tuning in for each week. I would love to see Andre Johnson rack up more touchdowns to help cement his future in the Hall of Fame.

The Colts (6-3) were beaten like rented mules by the visiting St. Louis Rams 38-8. They did their part to give the Texans a chance at a comeback this season in a division race, but that is all for nothing at this point. Indy heads to Tennessee next week.

The Titans (4-5) have the honor of being the only team in the NFL to have lost to the Jaguars this season, yet they are still comfortably in second place in the division.

The Jaguars (1-8) defeated the Titans 29-27 in Tennessee, and now threaten the Texans for third place in the division. No sentence has ever been more depressing to type. The Jaguars host the Cardinals in Jacksonville next week.

"I'm a Doctor, not a Human Resources Administrator!" 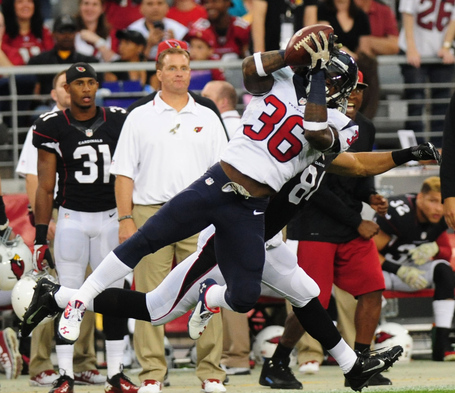 D.J. collected his first career NFL interception against the Cardinals, and he nearly had another that could have been a "Pick 6". He was making huge plays on third downs, defending passes and making critical tackles all over the field. The second round draft pick is developing quickly and effectively in his rookie year. He brings endless energy and excitement to an otherwise depleted secondary unit.

The future is looking bright for #36!

"He made a great interception. He almost had another one for a touchdown. He made a lot of tackles. He’s gotten better and better every game he’s played. I think he’s a really good young player. I’m excited about him. I think he’s got a real bright future. He plays the game the way you like to see it played, like a lot of our guys play. He plays it the right way. He plays with great enthusiasm. It’s important to him." - Coach Wade Phillips

J.J. Watt - The reigning Defensive Player of the Year continues to press hard every week with outstanding performances. He had one sack, four tackles, several pressures and two forced fumbles, both of which he recovered, against the Cardinals

Andre Johnson - The stoic veteran was making incredibly athletic touchdown catches while blanketed by Patrick Peterson, a top five corner in the league. It is clear that 'Dre is thoroughly enjoying a rejuvenated career with Case Keenum feeding him red zone opportunities.

"Hey, doll. Could you scare up another round for our table over here? And tell the cook this is low grade dog food. I've had better food at the ballgame, you know? This steak still has marks from where the jockey was hitting it."

The Offensive Line was atrocious! They looked confused about their assignments and nearly got their QB killed throughout the game, especially in the second half. The first play of the game, they allowed the pass rush to get to Keenum, where they stripped the ball and took it in for a touchdown. Way to go Derek Newton and company!

CB Brice McCain should consider changing his last name to "Charcuterie", as he is getting smoked like a holiday ham in every game this season. I think he has made this Brig list every week as well. Let's hope to see more of Brandon Harris, because our livers can only take so much abuse!

Joe Marciano is still coordinating special teams for the Texans, and his special teams are still doing everything possible to lose games. A blocked field goal made the difference in this three point loss. His units are just not prepared; ever.

Ed Reed was sent packing today. Not that he was responsible for this loss, since he only played a dozen snaps, but his lack of presence and performance contributed to failure. It really isn't that big of a loss by cutting him, since he was a complete "no show" for the Texans this season. That's a shame. We could have paid that money to someone like Glover Quin, who is tearing it up for the Lions this year. 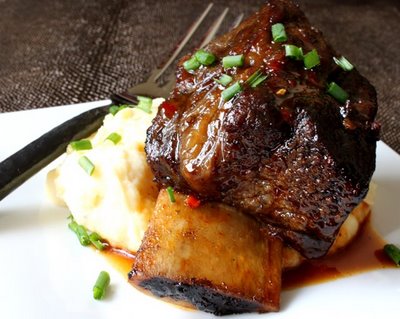 The weather is getting cold, and this dish is a hearty and flavorful meal to keep you warm and help you dream of future seasons of better Texans football. I assure you this is a recipe you will want to attempt. It is my wife's favorite!

Turkish Cumin
Ground Cinnamon
Smoked Paprika
Directions
Heat bacon (or vegetable) oil in a dutch oven or large, heavy covered pot over high heat. Dredge ribs in flour and shake off excess. When pot is nearly smoking hot, add ribs without crowding them and sear on all sides until they form a brown crust. Do this in batches, if necessary. When all ribs have browned, add onions, celery and carrot; saute 1 minute to brown lightly. Stir in tomatoes, garlic, vinegar, Worcestershire sauce, bay leaves, spice mix and red wine. Then add enough beef broth to just cover ribs. Bring to a boil, reduce heat to gently simmering, cover and simmer until very tender, about 2 1/2 hours. This can also be cooked in the oven if you need the stove top; just set it for about 300 degrees (F) and the same cooking duration.

Transfer ribs to a platter (using tongs) and keep warm. Pour cooking liquid through a fine sieve set over a saucepan, discarding solids, and skim away any fat. Boil liquid and add slurry** to thicken it slightly, and spoon sauce over ribs. Garnish with chopped/minced green onion or chives. Serve with boiled new potatoes, mashed potatoes or with rice.
**Make a slurry (thickening sauce) by combining equal amounts (for this recipe, 4 Tablespoons) of cold water with corn starch. Mix together and pour into sauce while boiling and stirring to thicken the sauce.

Noon (CDT) is the new game time for the Texans vs Patriots in Week 13. With any luck, Brice McCain and Derek Newton will show up three hours late.

J.J. Watt's jersey number. It's also the total number of career yards he has racked up by stuffing opponents for a loss.

The exact same score for the Texans' losses the last two consecutive weeks. Hey, they are at least consistent at something.

The number of Texans on Injured Reserve.  It's 10 if you include Owen Daniels, who is designated to return. That is only because nobody can rule out any additional self-inflicted wounds that might extend O.D.'s absence from this disaster film in the making.

"I'm going to put it right on the line. There's been a lot of complaints already. Fooling around on the course, bad language, smoking grass, poor caddying. If you guys want to get fired; if you want to be replaced by golf carts, just keep it up."

The Texans host the Oakland Raiders at Reliant Stadium on Sunday, November 17 at 12PM (CST) on CBS.