Houston Texans Snap Count Report: Ed Reed Down (And Out); Brandon Harris Up (And At 'Em)

The Houston Texans are sitting at an unlucky seven games in a row under the loss column and the depth on the roster isn't so deep anymore. Here's how the team deployed its players last Sunday against the Arizona Cardinals.

Share All sharing options for: Houston Texans Snap Count Report: Ed Reed Down (And Out); Brandon Harris Up (And At 'Em)

The "Eiffel Tower" double team at right tackle continued for yet another week but, unfortunately, it started off with Derek Newton getting beat by John Abraham around the corner for a strip-sack of Case Keenum. The fumble was recovered for a touchdown to put the Texans down early. The Cardinals wouldn't relent; they brought heavy blitz packages at all the right times against a porous offensive line and a quarterback struggling to find a hot read.

The worst sack came early in the 4th quarter. Arizona brought six rushers against the Texans' spread formation and there was little Keenum could do. 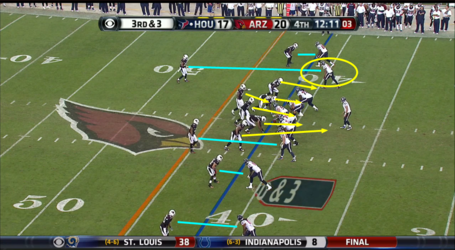 The Cardinals make it readily apparent that they're bringing the house. With a safety semi-deep in man coverage against DeVier Posey (circled), this has to be the hot read for Keenum. Unfortunately, the route for Posey is set (a short out route) and Keenum has no power to change it. It seems like 31 other quarterbacks could read this obvious blitz and react accordingly with an audible. 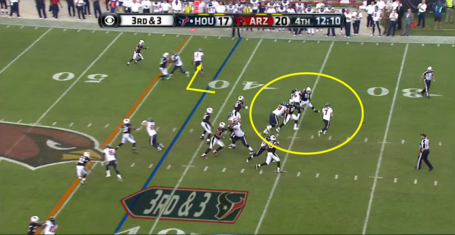 While Posey's route isn't deep at all, neither Brandon Brooks nor Derek Newton give Keenum any time to make a throw. Before the snap, I would have loved to see Keenum audible to Posey (give him a hand signal or something) to get him ready for a quick slant or hitch instead of that out route; instead, he runs to the flat.

This lack of flexibility for Keenum is a symptom of Gary Kubiak's offensive system, but the offensive line seldom gives him much time.

Speaking of Posey, he continues entrench himself as the team's third wide receiver and even got more targets than Garrett Graham.

Ed Reed saw the field for only 12 plays last Sunday; I imagine he spent most of his time devising a way for the team to release him. Wth his post-game comments and subsequent Twitter spree, he got his wish, leaving the Texans wondering where $5 million went. Good riddance and good luck, Ed. We'll always have that one time you... um... got burned by Vernon Davis.

Brandon Harris finally (FINALLY) got some meaningful snaps but they came at the expense of a chest contusion to Kareem Jackson. The former second-round pick impressed me in his limited work with two passes defensed, including a potential touchdown pass to Andre Roberts. I've been clamoring for more playing time for Harris for weeks, so hopefully we'll continue seeing more of him. Unfortunately, Brice McCain will likely see more snaps with Jackson possibly shelved for some time.

With the injuries piling up, the roster is filling up with uninteresting UDFAs.  I'll keep tracking who's playing throughout the season. Let us hear your thoughts on the roster and who should be playing. Happy Wednesday!