Hate the Raiders? Well, you will now. Check out The Pregame before Houston plays Oakland on Sunday.

Share All sharing options for: The Pregame Week 11: Raiders @ Texans

I'm referring, of course, to when Bud Adams threatened to move the team to Jacksonville unless the city renovated the Astrodome. When the city capitulated, Adams waited only a few short years before demanding a new stadium. The city of Houston told him what he could do with that, and the team ended up moving to Tennessee.

If you are one of the faithful who remember that, you should thank your lucky lone stars that you're not a Raiders fan. See, what was a brutal moment in Houston sports history, is pretty much business as usual for the Oakland/L.A./Oakland/(L.A.?) Raiders.

It all started in 1961 when F. Wayne Valley, the original managing general partner, threatened to move the team unless he got a new stadium. I haven't researched this, but it may be the move that launched a long history of owners hijacking teams.

They got their stadium, the Oakland Coliseum, which was completed in 1966. A mere 14 years later, Al Davis announced that he wanted to move the team because he couldn't get the luxury suites that he wanted.

The NFL owners rejected the move 22-0, but Davis and the Los Angeles Memorial Coliseum filed an anti-trust lawsuit against the league and were eventually granted the right to move (and Davis filed his own separate lawsuit as well, just for good measure).

After moving to Los Angeles in 1982, Davis waited a full four years before trying to move out of the L.A. Coliseum (not very creative with stadium names out in Cali, are they?) as he still couldn't get the suites and the surrounding area was too dangerous (so, hey, let's move back to Oakland!). Davis did receive a good-faith deposit from nearby Irwindale of $10 million; when the bid failed, Davis pocketed the money.

Finally, in 1991, Davis announced that the team would return to Oakland, only to renege on that idea a few months later (causing fans to go all Matt-Schaub's-jersey on Raiders paraphernalia). A few years later -- 1995, to be precise -- Davis reneged on his reneged and moved the team back to Oakland.

Still with me? Well, don't get too comfortable yet. See, now the Raiders again want out of the new-old Oakland Coliseum and are a candidate to move -- yup, you guessed it -- back to L.A. One can't help but wonder if the Raiders would have had a nice, shiny new stadium in Oakland by now had they simply stayed put and treated the community with respect.

So, all this to say, if you're one of those fans that thinks fans get the screw-job by owners who hold the team hostage unless they get what they want, look no further than the Raiders as the poster child for that kind of behavior.

1. Why does there seem to be one of these every week? The Texans hold a 5-2 record against the Raiders, but it was 5-1 before the teams last met in 2011. You'll remember that as the game the day after Al Davis passed and the game where Matt Schaub threw a game ending interception.

2. Haven't we killed this meme yet? The whole cat video thing was kind of cute and funny... back in 2002. Oakland, apparently, didn't get the message, as they hosted an Internet Cat Video Festival this past spring.

3. Rat, meet ship. We already touched on the possibility of the Raiders moving back to Los Angeles, but apparently the Warriors are trying to move to San Francisco by 2017, and the A's are in a legal battle to potentially move to San Jose. That rant above clearly extends beyond the Raiders.

Ok, after the crab fest from last week and with the holidays on the horizon, it's time for a bit of culinary detox. This week we're going to go with something a little lighter. Something I like to call Tuna Ta-taco. Simply put, it's a taco made with sushi grade tuna.

Get yourself a high quality tuna steak, and make a very simple rub with a little salt, pepper, onion powder, garlic powder, ginger powder, and a touch of wasabi. Sear the tuna on both sides and slice. Make a sauce with mayo, soy sauce, sriracha, and sesame oil. Place the tuna slices on toasted flour tortilla* with a bit of sauce, toasted sesame seeds and cilantro.

*If you can, get yourself a comal and toast your tortillas rather than heating them in the microwave... it takes 10 seconds and makes for a WAAAAY better tortilla.

THREE OF THESE STATEMENTS ABOUT OAKLAND ARE MOSTLY TRUE

1. More sourdough bread is produced in Oakland than in any other city in the world. Before that, it was known as sweetdough bread.

2. It is illegal for animals in California to mate publicly within 1,500 feet of a tavern, school, or place of worship. Thank goodness the tavern made the list.

3. Amelia Earhart's fateful attempt to circumnavigate the world started in Oakland. Rumor has it that she was on track until she realized that she was, in fact, returning to Oakland.

4. Many people consider Oakland to be San Fransisco's ugly stepbrother, but what's often overlooked is that Oakland is also San Jose's piss boy.

"The trouble with Oakland is that when you get there, there isn't any there there." -- Gertrude Stein

As I mentioned last week, it's getting to that dark beer time of year. Unlike last week, this time I am going with a stout. One of my favorite stouts at that: Yeti Imperial Stout from the Great Divide brewery in Denver, Colorado.

Yeti is a big, strong stout with a thin head and light carbonation. The big body of this beer is comprised of a nice roasted malt and caramel flavor, but it's balanced with a strong bitterness from what must have been a huge hop addition. It's almost like a black IPA.

Many stouts try to get very fancy and are too intense in one element or another, but Yeti does it just right. At 9.5%, the alcohol doesn't overpower the flavor and instead is part of a nearly perfectly balanced flavor profile. Overall, this is a fantastic beer. I recommend it to anyone looking for a good winter brew. 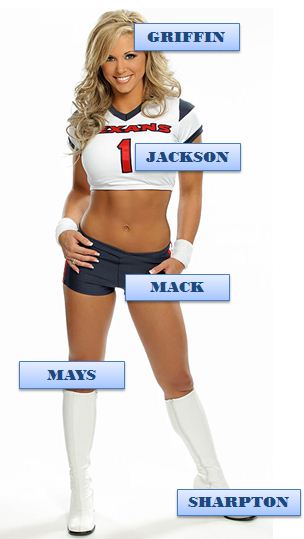 Ryan Griffin (Not From Wisconsin). Griffin has a concussion and hasn't yet returned to practice. Who's the next Wisconsin TE on the depth chart?

Darryl Sharpton (Again) Seriously, I'm running out of jokes for Sharpton here. He needs to heal up.

Elbert Mack (Who?) Tis a sad day in Texans land when we start caring that Elbert Mack is on this thing.

Joe Mays (ILB) Next week I'm going to just cover Brandy over there with a big box that says "ILB."