The Houston Texans claim CB Justin Rogers off of waivers from the Buffalo Bills. BRB also fills you in on a few other down the roster moves made by the Texans this week.

Justin Rogers was a seventh round draft pick in 2011 for the Bills.  As a rookie, he recorded 14 tackles and 1 interception.  In 2012, he racked up 37 tackles and another interception.  This season, he started the first five games for the Bills due to injuries to Stephon Gilmore and Ron Brooks.  His performance was less than favorable, as opponents targeted him often with great success.  So far this season, he has recorded 23 tackles, 3 passes defended and an interception before being declared inactive for the past six games.

With Kareem Jackson inactive in the last game against the Raiders, it was shrewd to add depth to the position.  Justin sounds like the perfect fit for  "no-fly-zone" "parking cone" defensive backs Brice McCain and Brandon Harris for the last six games of the most disappointing season in Texans' franchise history.

Speaking of McCain and Harris, they were captured in this image while vacationing at Big Bend National Park during the off-season. 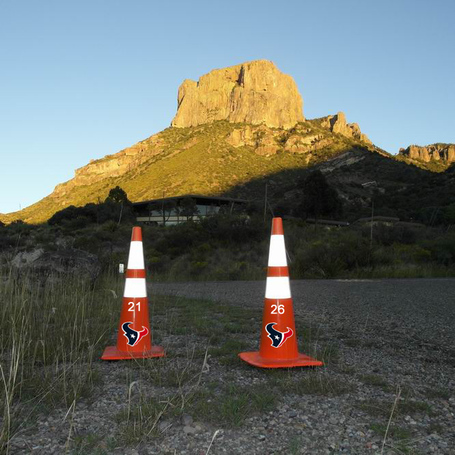 Other Texans' Roster Moves This Week:

These are obviously not sexy roster adjustments made in preparation for a big finish to the season, but perhaps it gives the Texans a few more players to evaluate before the ship slips below the surface in December.  To quote UprootedTexan;

"That swirl down the drain just got a little bit faster."