If you're finding it hard to get worked up for a matchup featuring two teams that have won a combined three games, this should help. Or at least it will point you to a good beer.

Share All sharing options for: The Pregame Week 12: Jaguars @ Texans

IF A JAGUAR FALLS IN THE FOREST...

I moved to Miami, Florida as a 10 year old kid in 1988 and lived there through high school. I went to college in Chicago, and then got a job back in Melbourne, FL. After four years, I went back to school for my master's degree in Boston before returning to Melbourne in 2006, and I've been here ever since.

Suffice it to say, I've spent quite a bit of time here. For all but seven of those years, the Jacksonville Jaguars have also been citizens of our great state.

So, if you add it all up, the Jaguars and I have shared Florida for almost 13 NFL seasons now. Throughout that time, I've traveled all around Florida, including quite a bit of time in Jacksonville as my brother-in-law was stationed there for a few years.

What I'm about to say, then, I say without the slightest bit of hyperbole: I don't think I can name more than three Jaguar fans.

This isn't a joke about tarps (though those will come later), or a slight at the record. It's a simple fact.

According to Google maps, Melbourne is 160 miles from Joe Robbie Stadium (ok, ok... Sun Life Stadium), 150 miles from Raymond James Stadium, and 178 miles from EverBank Field. We're about as centrally located from the three major football teams as you can get in Florida.

Yet, while I know a ton of Dolphins and Bucs fans, I honestly struggle to think of anyone that gets excited about the Jags.

And it's not like the Dolphins and Bucs have had such incredible histories. The Dolphins haven't won a playoff game since the turn of the century and the Bucs, while Super Bowl Champions in 2002, are 0-2 in the playoffs since.

In fact, one could make the argument that over the past ten years, the Jags have been the most successful team in Florida.

Even this season, when the Jaguars are probably the worst team in the league, they remain the only Florida team to not run a player out of town while simultaneously disappointing all their fans.

According to my sister and brother-in-law, this is different within Jacksonville city limits. While they lived there, I constantly heard about how nobody in Jacksonville cares about anything but the Jaguars (insert attendance joke here). Step one foot out of Duval County though and the entire team is an afterthought.

You could go so far as to say that that's symbolic of Jacksonville as a whole. While it's the largest city (technically) in Florida, it ranks about 106th on the interesting scale. Hell, it's not even the most interesting city in northeast Florida, with St. Augustine staking that claim.

So, with that said, I feel comfortable speaking for all the people in Florida when I say let's put a tarp on the northeast corner of Florida and claim ourselves to be a better place.

1. Ugh.. What's worse? The fact that this actually happened against the Jaguars, or the fact that just about all of us would fight a real jaguar to have Glover Quin back on the team.

2. How do I support this? As someone who lived directly in the heart of the NCAA Tim Tebow love fest (which was about as enjoyable as getting hit in the testicles repeatedly with a rubber mallet), this and this put a nice shadenfreudian smile on my face. I wonder if they actually rally every Monday?

Like last week, in anticipation of the holidays, I'm going to do a light meal this week. Then, it's on. So, this week, we're making one of my favorite sandwiches: Banh Mi.

I've had a bunch of banh mi and they're all great, but the best are the traditional, simple ones. The freshness of the vegetables along with the grilled, marinated pork (some do it with chicken, but it's better with pork) make for an amazing sandwich, and it's pretty easy to make at home. You just have to be ok with the fact that you're going to spend a few hours making a sandwich.

Meanwhile, boil 1/2 cup of rice vinegar, 1/4 cup of water, and 1/4 cup of white sugar. Let it cool and pour over carrots, daikon and cucumber that has been sliced into thin, matchstick strips. Let that sit for at least 30 minutes.

When all is ready to go, take some freshly baked french bread, add a few strips of pork, some of the veggies, some sliced jalapeno, and cilantro. It's a grilled pork sandwich with veggies, so it's a healthy sandwich. It's also absolutely delicious.

THREE OF THESE STATEMENTS ABOUT JACKSONVILLE ARE MOSTLY TRUE

1. It is illegal in Florida to have sexual relations with a porcupine. Personally, I feel this should be repealed as anyone interested in such acts deserves what they get.

2. Recently a baby jaguar was born at the Jacksonville Zoo and was named Khan after the Jaguars' mustachioed owner. As a birthday present, Shahid Khan sent a couple of tarps for the exhibit to make it more like the Jaguars' natural environment.

3. In the early 20th century, Jacksonville was known as the "Winter Film Capital of the World" as more than 30 silent film studios were drawn to the warm climate. Once sound was introduced, however, people realized that hearing people bitch about Jacksonville wasn't so interesting.

4. Andrew Jackson's face was originally on the $50 bill, but after considering the city that bears his name, he was demoted to the $20.

Not available this week. Nobody talks about Jacksonville.

It's a little known fact that one of the greatest beer cities in America (and the world, for that matter) is Asheville, North Carolina, so today we're going to highlight one of my favorite beers from that area: Highland Gaelic Ale.

This ale is an amber ale bordering on red. It's got a malty, sweet, caramel flavor that doesn't overpower to the point where you feel like you're eating a jolly rancher. The hop character is noticeable, but really just there to balance that sweetness a bit.

If you've learned anything from reading these sections, it's that I truly value a well balanced beer. Like the others I've highlighted in this space, this beer has that in spades. At right around 5% alcohol, it's the type of beer that you can sit back and enjoy without worrying too much about repercussions. Unless you have as many as I did last night, in which case, those repercussions are unavoidable. 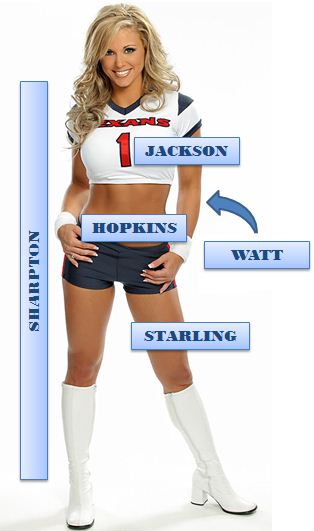 J.J. Watt (Carrying the D). I didn't get a very clean look at the play that Watt got hurt on, but I'm pretty sure the other guy is dead.

Kareem Jackson (Watching McCain). Kareem's ribs are still sore, but if there's any justice in the world, he'll be on the field this weekend. Oh... right... Look for Jackson to be in street clothes.

Darryl Sharpton (No Kitten) Looks like Darryl has added a back injury to his foot. Because Sharpton.

Jawanza Starling (No, I Donwanza) Is it wrong that I'm excited that he's hurt only because I love to say the name Jawanza Starling? Get well, Jawanza. But not too quickly.

DeAndre Hopkins (Huge Hands) The injury report says that Hopkins was held out of practice for an illness. I understand. I'm sick of this too.

Jason Babin (still sore from sucking as a Texan)

Mike Brown (If catching passes from Chad Henne represents a career upgrade, you'd be hurt too)