The Texans extend their losing streak to a franchise record of NINE, and Capt Ron chronicles the latest game against the Jaguars at Reliant. 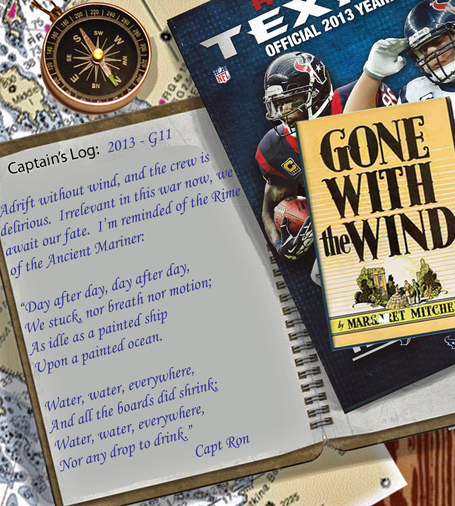 Ah yes, the Sargasso Sea. That best illustrates where this Texans' ship is at this point in the season. It is also an area known more commonly as "The Doldrums." A place in the middle of the Atlantic Ocean with very still water and little to no wind. A place of despair.

There is no wind left in this organization, aside from the usual heroics from one J.J. Watt and perhaps a few other individuals striving to make a difference each week. Even Coach Kubiak sounds completely deflated in his press conferences. It's hard to be positive, even when you say; "Let's stay positive."

We have enjoyed a lot of great moments over the years, but it just stings a little more when the momentum from two previous seasons was providing increased expectations for this year to finally be THE one. There is no doubt that we will see more great times in future games and seasons, as well as more horrific disappointments. It is the nature of this sport of football.

Since we are on the topic of the wind, I found it interesting that Patriots' coach Bill Belichick chose to go with the wind in overtime against the Broncos in the game Sunday night. He won the toss, and gave the ball to an offense that has been setting and shattering NFL records all year. He wanted the wind at his back, even if it meant giving Peyton Manning the ball first. Was he crazy or genius? Love him or hate him, you have to give the man credit for knowing what he is doing.

NFL Media research notes that, in the 33 overtime games played under the new rules, just five have ended on the first possession with a touchdown. [1] Armed with that data, Belichick wanted the 20+ MPH cold wind behind his kicker in the overtime period, and he wanted that cold blast as an ally against a future Hall of Fame QB and the Broncos' kicker. It worked, and he won the game. Brilliant!

The only wind Bill and the Patriots should face next week at Reliant will hopefully be fans yelling to support the Bulls on Parade when the Texans are on defense. Let's hope the booing crowd has decided to stay home and give it a rest, as this season's horse is dead, beaten, and shoveled into an early grave.

New wind will bring in changes of some type for the Texans; that much we can be sure of as we wrap up this terrible season in 2013. With five games remaining, let's hope we see some excitement and keep the star players healthy. As many of you take time to enjoy a long weekend with friends and family, may it be safe and fun and memorable.

The Colts (7-4):  Indy was in a nail biter in Arizona. Did I say "nail biter?" I meant to say that Jim Irsay must have been pulling his nails out with rusty pliers as the Colts suffered a 40-11 pasting. They host the Titans next, and still have a two game lead in the division over Tennessee.

The Titans (5-6):  Tennessee edged past the Raiders with a 23 - 19 victory in Oakland. They head to Lucas Oil Stadium next week to try and close the gap in the division. Let it be known that they will likely have to defeat the refs as well, because some of us wear tinfoil on our heads when we consider the way things work in the NFL this time of year.

The Jaguars (2-9) [Per BRB posting policy, this sentence intentionally left blank]:  Jacksonville will head to Cleveland next week. It is a game where Bobbythegreat and many other Texans fans will be pulling for the Jags to win and help the Texans in their quest for the first overall pick in the 2014 NFL Draft. There is a good possibility for Jacksonville to win, as it was announced that Brandon Weeden is back under center for the Browns. Go former "Glitter Kitties", or as we know them now..."Two-Tone Cats!"

Let's get on with it. Here is the miserable technical data from the Texans game from two days ago...

"I'm a Doctor, not a Funeral Director!"

CB Kareem Jackson - Inactive for the Jaguars game, still day to day with a "bruised sternum"

TE Owen Daniels - He is not on the practice field yet, but "getting close."

LB Brian Cushing - Brian is now off crutches and expects to be 100% by late January. 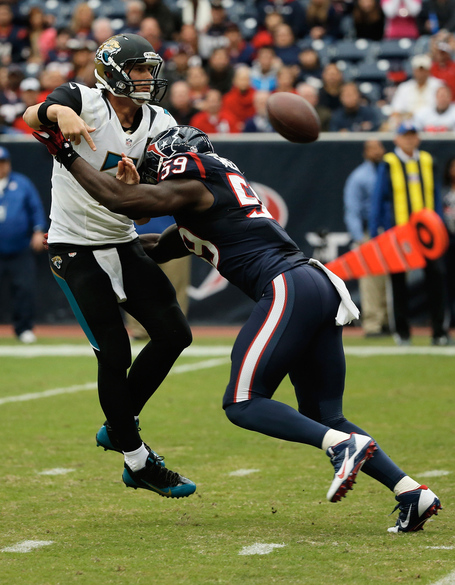 Mercilus was on a tear this game with one sack, six tackles and a ton of pressure. If he can do this consistently each week, he has a bright future! This makes the second time we have featured him as the BZ winner of the week. Obviously he is making a case for the Texans to focus on a QB in that first round of the draft and let someone else pick up Jadeveon Clowney or Anthony Barr.  While we appreciate the performance from Mercilus by recognizing him here, he is on notice that he needs to do this EVERY week.  Showing up twice out of eleven games isn't good.

J.J. Watt - This guy should just have a permanent BZ locker at this point, as he is worthy every week. He had one sack, nine tackles and a blocked Field Goal on the day. It is incredible what this guy can do on a football field.

RB Dennis Johnson - Ran 13 times for 74 yards for a 5.7 yard average, and that's coming off the bench to fill in for Ben Tate, who is still recovering with four cracked ribs. In previous weeks Dennis has not looked good, but he had a very solid game against the Jags.

The Brig is full. Let's face it, this game was terrible. The Texans only had 60 total yards of offense in the first half, including FOUR net passing yards. Go ahead, rub your eyes and read that again. FOUR net passing yards in two quarters of NFL football. They went "three and out" on four of their five possessions in the first half. By the end of the game they only scored six points. Let's just put this memory behind us.

I might have been tempted to jam Keshawn Martin in here for that bobbled interception at the end of the game, but you can't fault a guy for trying to make a play when the air had already been sucked out of the stadium. The ball is clearly not bouncing in favor of the Texans this entire season, and that play just illustrates things completely. Let's just release the prisoners, and let them eat with their families and friends.

This is a common week for family and friends to gather together and eat, and drink, and eat, and drink, and pass out from eating and drinking while watching football. Mix things up and try something new! This recipe is an awesome way to bring a good balance of flavor and texture to what is normally considered a key side dish. Make it the focal point dish they all remember!

You can find the recipe by clicking HERE which takes you to FOOD52.com for this amazing recipe.