The Captain's Log - Game Eight: "The Curse of Neckbeard"

The Texans wrap up the first half of the season at 2-6, but oddly enough are still in a fight for the playoffs if they can run the table in the next eight games. 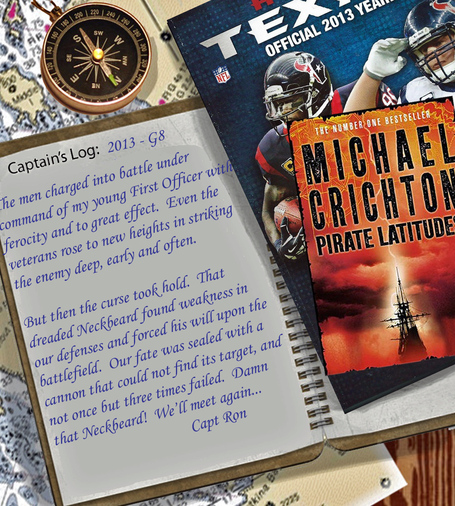 First and foremost, at the time of this writing, the latest news is that Coach Kubiak is home with his family and doing well after quite an unexpected health scare with a "mini-stroke" suffered at halftime during the game against the Colts.  He will miss this week's game in Arizona, but is expected to return afterwards to prepare the Texans for their home game at Reliant against the Raiders.  The game of football comes a distant second to a person's health, and our thoughts and prayers go out to him and his family for a speedy and full recovery.  Keep battlefightin', Coach!

Before I get into the meat of this, let me say that I finally subscribed to the NFL Game Rewind, which includes the "All 22" coaches film.  I had thought of doing this anyway just for the ability to do better analysis, but my hand was forced this week.  I spent the weekend in California, eating and drinking my way through the wine country.  Horrible traffic in San Francisco delayed my arrival at the hotel where I planned to watch the Texans game before flying home early the next morning.  I listened to the first half on the radio and did get to see the second half at the hotel.  I assumed I would enjoy replaying the first half on my DVR at home, but I discovered that it failed to record the game as programmed.  So I signed up for the NFL service and I have to tell you it is simply worth every penny.  There are three modes you can watch the games--full broadcast HD with DVR controls (sans commercials), a condensed version that jumps from the end of one play to the beginning of the next, and then the incredible "All 22" view.  I highly recommend this service!

It was another heartbreaking loss for the Texans, but there is absolutely no doubt that watching Keenum spark this offense has been quite simply "fun" to see.

Not usually known for "quality" commentary, Cris Collinsworth did said this about Keenum during the broadcast;

"It's the mentality that I'm enjoying more than anything else.  Instead of all these little throws that were really the trademark of Matt Schaub and this offense for the first half of the season...defensively, all that tape the Colts watched...you've got to throw out the window at this point, because this kid wants to throw everything down the field."

While it is exciting to see Case perform well, and we certainly hope this continues the rest of the season, it does come at the expense of knowing that Matt Schaub's career is coming to an abrupt and less dignified end than he or many of us expected.  I do appreciate the great performances we enjoyed with Matt over the years in leading an explosive Texans offense, and I hope he is remembered more for his highlights than his recent dreadful mistakes.

For three quarters, the Texans were on fire and looking great on both sides of the ball.  Keenum was lighting it up with gutsy throws and elusive moves in and out of the pocket.  The defense had the pass rush we all know and love, and it was effective because the offense had quickly put up points early and forced the other team to drop back and pass to catch up.  In the fourth quarter; mistakes by the secondary giving up big plays,  and three missed field goals killed this game for the Texans.  Andrew Luck added this performance to his now TEN game winning drives in just one and a half seasons in the NFL.  That neck-bearded guy is going to curse this division for years to come.

It might be simple enough to write this season off with no expectations that the team could possibly run the table for the next eight games.  Even if they did that, and somehow made the playoffs, there is little hope that they could advance with this injury-hammered roster.  On the other hand, crazier things have happened in this league for some teams.  Why not the Texans?

For the players, going into the next eight games is not much different than a golf game.  Focus on the back nine, and don't think about how things went on the front nine.  One game at a time.  There is still a lot of football left, and there are other AFC teams who could fall off after starting strong.  As crazy as it sounds, there is still a chance.

The Colts beat the Texans to improve their record to 6-2 and are now ranked #3 on the NFL power ranking list behind Kansas City and Denver; ranked #1 and #2 respectively.  They next host the Rams at Lucas Oil Stadium before heading to Tennessee and Arizona.

The Titans beat the Rams in St. Louis 28 - 21.  Next week they play at home against the Jaguars, followed by another home game against the visiting Colts.  The Titans are 4-4 and remain in second place in the AFC South.

The Jaguars, coming off their bye week, did not lose a game this week despite some creative proposition bets to the contrary.  What they did lose was wide receiver Justin Blackmon, who was suspended indefinitely by the NFL for another substance abuse violation.  The state of Florida is certainly struggling with NFL representation when you consider the disaster in Tampa (0-8), and the potential implosion for the Dolphins (4-4) after losing TWO starting offensive linemen.  Richie Incognito was suspended indefinitely pending an investigation of his history of abuse toward fellow lineman Jonathan Martin, who voluntarily departed the team.  Tough times for the NFL in Florida indeed!  Next week the Jaguars head to Tennessee, and then add more seat covering tarps at home in preparation for the visiting Cardinals.

"I'm a doctor, not a curse removing voodoo chieftain"

Without the normal press-conferences for the Texans due to Kubiak being out, the usual injury updates have not been made available.  We will update this with details from the press conference with interim Head Coach Wade Phillips, which is expected to take place after practice on Wednesday. 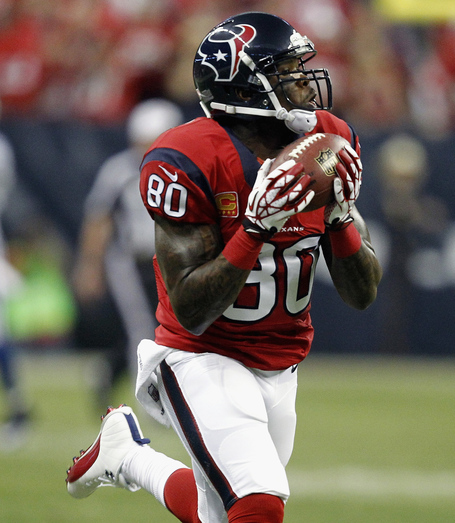 Andre Johnson had a career game against the Colts and set several records [1] :

Andre took the time to share his thoughts on this game against the Colts, Case Keenum's performance, Coach Kubiak's situation, and several other great bits of insight around the locker room and his own interest for a second career in this very revealing Texans Radio Interview with Andre Johnson.

I really urge you to listen to that interview.  'Dre mentioned that Quarterbacks Coach Karl Dorrell told 'Dre before the game; "Don't be surprised if you get three touchdowns."  What a ringer that turned out to be!  Andre also pointed out that the fifteen scripted plays included deep pass plays, and it was then that he realized they (coaches) were serious about some of the things they ran in practice.  This clearly shows a change in the offensive philosophy with Keenum under center.

It was the most I have heard Andre Johnson speak in 11 seasons, and it was really fun to hear his take.  If nothing else, you will at least feel good about how he feels going into the second half of this season.  There are no words to describe how amazing this person is, and how incredible his time here in Houston has been over the years.  Thank you, Andre!

Coach Kubiak - He installed a more aggressive game plan and it worked well to set the Texans up for a win.  The team made fewer mistakes than in previous weeks, although the few mistakes were big and costly.  He definitely had this team ready to beat the Colts.  "ALL" of the players have to do their part.

Antonio Smith - 2 Sacks, 3 Tackles and many QB pressures.  The Ninja was in the backfield all day!

D.J. Swearinger - 1 Blocked FG Recovered/Returned, 2 Tackles, 1 Pass Defended.  This rookie was on fire with big plays when stops were needed on third down.

"For example, you love horses. I don't trust them. Their shoes are permanent. Who makes that kind of commitment to a shoe?"

There's always a reason a team loses a game.  I was hoping this section would remain blank this week, and it was well on the way to that being the case until 29 seconds remained in the 3rd quarter.

K  Randy Bullock - Missed 3 Field Goals out of 4 attempts, including the final play of regulation that "could" have sent the game into overtime.  Granted, the last one was from a low percentage distance of 55 yards, but he needs to get the targeting system working.  He has the leg strength.  He eeds to get this dialed in for consistency.

CB  Johnathan Joseph - He has not been the "shutdown corner" caliber player this season:

CB  Brice McCain - He was burned twice for touchdowns by T.Y. Hilton, including one where he was supposed to bracket across from J. Joseph.  McCain has been regularly getting targeted and abused each week.  Either he needs to improve, or it's time for Brandon Harris to make an appearance in nickel and dime. 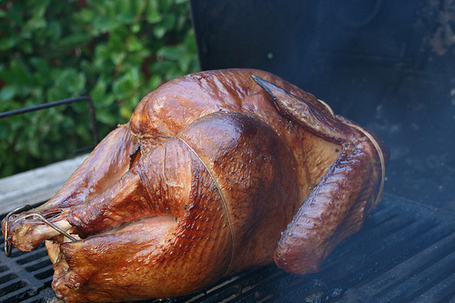 There will be a lot of turkey cooked in the next month or two, so I wanted to give plenty of time for folks to consider this preparation as an excellent alternative to the traditional oven cooked, or ever popular deep fried, treatments to this giant bird.

The full recipe and details can be found here on this BRB post: Captain Ron's Smoked Turkey,

Game winning drives for Andrew Luck in just one and a half seasons.  Our division is cursed!

Receiving yards for Andre Johnson on 57 receptions, with a 14.3 yard average and 3 touchdowns so far this season.  This would project him to 1,626 yards for the 2013 season, which would be a career best and eclipse his current best that was set just last season at 1,598.

Rushing yards for Ben Tate this season on 88 attempts for a 4.5 yard average.  36% of those attempts were with four broken ribs.

Receiving yards for DeAndre Hopkins on 31 receptions, with a 15.2 yard average and 2 Touchdowns.  Go rookie!

"Oh hello, Vivienne! I remember you from when I used to live in your womb!"

The Texans hit the road to take on the Arizona Cardinals next Sunday, November 10th at 3:25 PM (CST) on CBS.