Watching Andre Johnson play the game of football is something we should all cherish as fans. Now that the Houston Texans have freed themselves from the dreck of a stagnated offense, our beloved gentle giant shined on national TV. Stick with Battle Red Blog as we review Andre's performance on Sunday night versus the Indianapolis Colts.

It's hard for me to describe the joy I feel when I see Andre Johnson break off a long catch for a touchdown. The run-heavy nature of the Houston Texans and the various quarterback limitations he's worked with over his career have often limited his big play potential. However, on Sunday night, the team featured Johnson early, often and deep, and it's my absolute pleasure to review it here for you folks alongside Still D.R.E. by Dr. Dre and Snoop Dogg [NSFW]. Sing along if you know the words.

Still Snoop Dogg and D-R-E (Guess who's back)

Oh for sure, check me out

Before I chrome the lot, can't keep it home a lot

'cause when I frequent the spots that I'm known to rock

Ladies, they pay homage, but haters say Dre fell off

They want to know if he still got it

They say rap's changed, they want to know how I feel about it 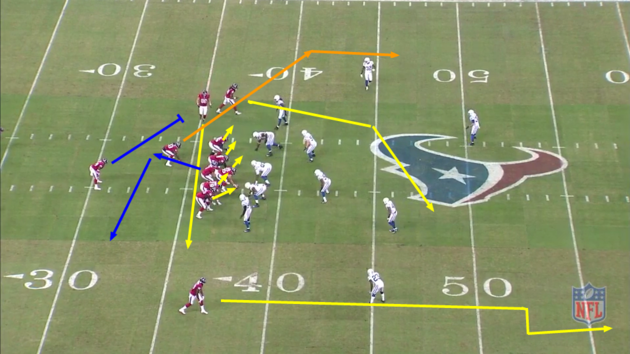 First quarter, first drive. The Houston Texans have this play scripted as the third play of the game, clearly hoping to make a statement early on. In their 21 personnel, they bring tight end Garrett Graham in motion from the split end position to Case Keenum's left. This helps Keenum read the Colts in zone coverage.

At the snap, Keenum fakes the give to Ben Tate for the bread-and-butter zone stretch to the left. DeAndre Hopkins runs a post route to the middle of the field while Graham slides along behind the offensive line to give Keenum a short range target.

I noticed a little wrinkle on this play that I hadn't seen before on these play-action roll outs. Highlighted in orange is fullback Greg Jones' route after the fake. If the Colts had been in man coverage, this route would likely be wide open.

Andre's route is on the bottom of the screen: the very deadly "out and up" or "chair" route against cornerback Vontae Davis.

Dr. Dre is the name, I'm ahead of my game

Still, puffing my leafs, still with the beats

Still rock my khakis with a cuff and a crease

Still got love for the streets, repping 213

Since I left, ain't too much changed, still 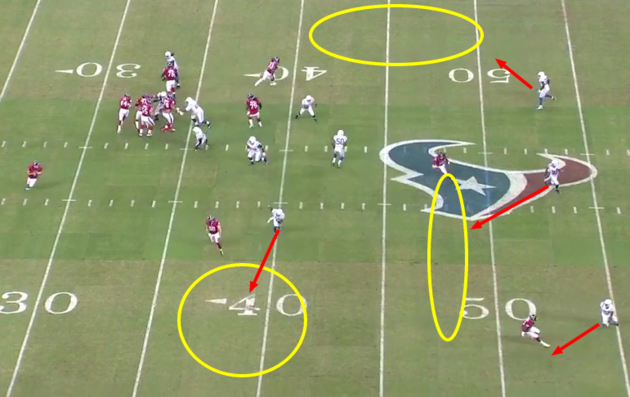 As the play develops, the linebackers that were sucked into the play fake scramble to find someone to cover. The safeties and cornerbacks break on the routes to the areas I marked above. Andre was asked about the play afterwards:

And did he ever bite!

Still taking my time to perfect the beat

And I still got love for the streets, it's the D-R-E 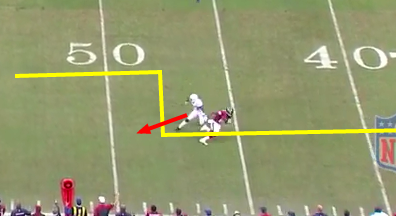 Andre's dedication to precise route-running pays big dividends here as he completely fools Davis on the double move. Huge credit to Keenum for staying patient on the route and making the throw deep for the 62-yard touchdown.

Well, hell, me and Snoop, we dipping again

Kept my ear to the streets, signed Eminem 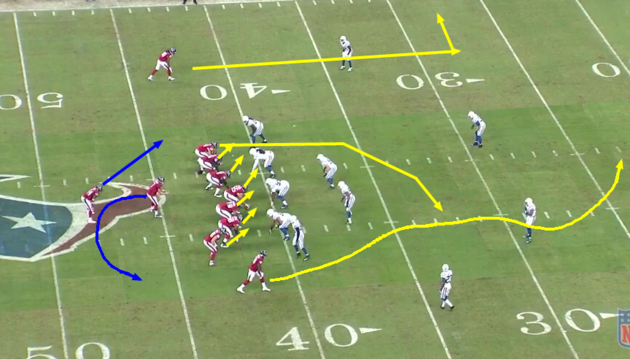 First quarter, third drive. In Pistol formation, 12 personnel, the Texans once again use play action to create a huge play downfield. Starting at the top of the screen, Hopkins runs a deep out route and rookie Ryan Griffin runs a post/drag route across the field while Andre Johnson runs a deep post.

Still, I stay close to the heat

And even when I was close to defeat, I rose to my feet

My life is like a soundtrack I wrote to the beat

Treat my rap like Cali weed, I smoke till I sleep

Wake up in the A.M., compose a beat

I bring the fire till you're soaking in your seat 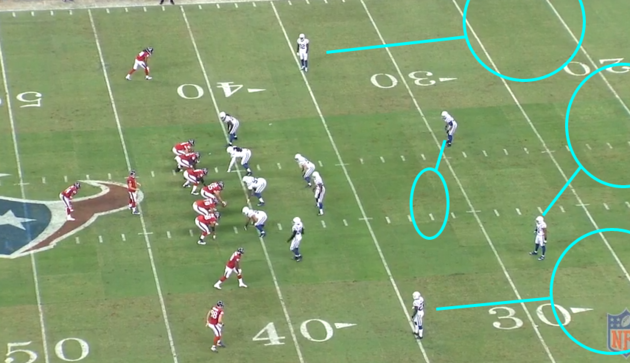 For reference, I highlighted the Colts in their Cover 3 defense. Andre runs his route, engaging safety Antoine Bethea in the middle of the field. Keenum rolls out and soon has a defender running him down, but he stays cool and makes the throw, trusting Johnson to make the catch.

It's not a fluke, it's been tried, I'm the troop

It's "Turn Out the Lights" from the World Class Wreckin' Cru

I'm still at it, After-mathematic

In the home of drivebys and ak-matics

I dip through then I get skin, D-R-E 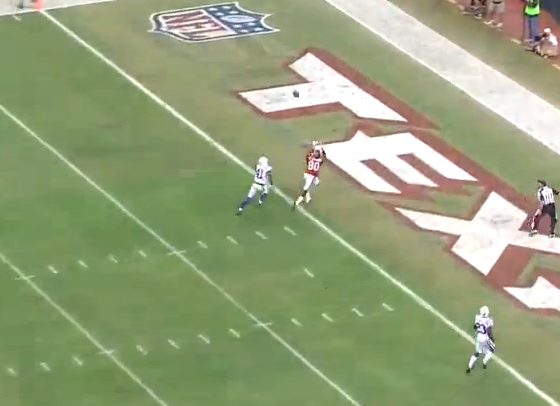 Bethea was actually in pretty good coverage on the play, but Andre's superior physicality and ball skills allow him to get behind the safety for the catch in the end zone. If you look at the replay at this point, you'll see Andre hesitate and then accelerate again.  He explained why:

"I wasn’t surprised that it got to me, I was surprised he threw it," Johnson said. "Normally, when we are in that situation, the quarterback wouldn’t throw the ball but I think Case just throws it differently, like ‘I like my guy better than that guy.’ He just gave me a chance and I was able to go get it."

This play and Andre's quote clearly illustrates the cavernous difference in play styles between Keenum and Matt Schaub. Keenum's energy and fearlessness has energized the offense.  While his zealousness will likely land him in trouble a few times in the future, you can bet Andre will keep rewarding him with catches like these.

Still taking my time to perfect the beat

And I still got love for the streets, it's the D-R-E 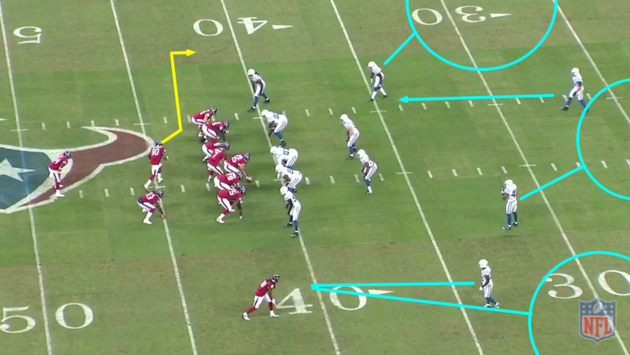 First quarter, second drive. Lastly, we'll take a look at another play-action pass against the Colts' Cover 3 defense. Andre is lined up behind Keenum and is motioned out to the left. Again, this allows Keenum to read the defense; if they had been in man coverage, a cornerback likely would have followed him to the outside. Instead, a safety moves down while the cornerback shifts closer to the sideline out of respect.

It ain't nothing but more hot s***

Another classic CD for y'all to vibe with

Whether you're cooling on a corner with your fly b****

Laid back in the shack, play this track

I'm representing for the gangsters all across the world

(Still hitting them corners in them low low's girl)

I'll break your neck, damn near put your face in your lap 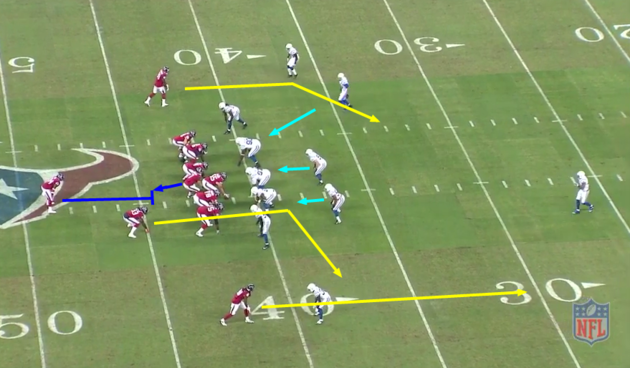 Another play-action fake, and the linebackers and the safety close to Andre bite hard. I've highlighted this play more to talk about Gary Kubiak's offensive schemes. Clearly, they can still work! Clearly, the offensive line can sell the play-action well enough to fool a defense! These past few weeks, there was much talk about whether Kubiak had been "figured out," and it's becoming exceedingly obvious that he hasn't.

Dr. Dre be the name still running the game

Hit my boys off with jobs, no more living hard

Still gonna get mine regardless 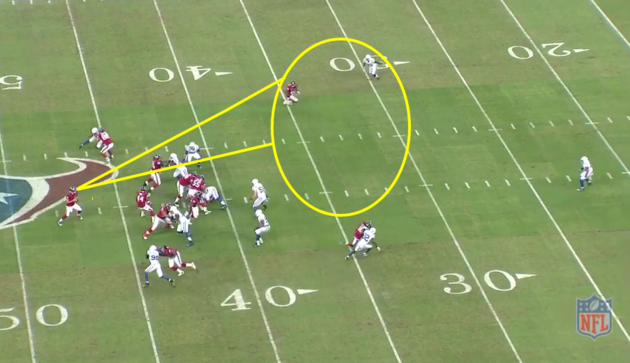 Keenum has all the room in the world to hit Andre down the middle. Plays like these are grand theft yardage.

That'll do it for me in this edition of Unnecessary Film Study. Really, it's only unnecessary because we all know Andre Johnson is one of the best wide receivers in the game despite his "advanced age," but it sure is fun taking a close look. Hope you enjoyed it as much as I did. As always, let me hear what you think down in the comments. Happy Wednesday.