This nightmare of a season is nearly over, but until then it is your responsibility as a fan to rile up as much hate as possible. Get angry before Texans-Colts.

Share All sharing options for: The Pregame Week 15: Texans @ Colts

If you haven't picked up on this recently, I'm pretty fascinated by franchise relocation. Mostly, I'm against it, as it's generally some variation of the same story. A billionaire owner feels justified in acting like a spoiled little kid (which he likely was in his youth), takes his ball, and goes home. All the while the fans who truly live and breathe with the team are the ones who get shafted.

Such is the story of how the Indianapolis Colts came to be.

The Irsay regime started with three blah seasons and then a trade of Johnny Unitas. That's how you endear yourself to the new fans. They had some success afterwards, but then started a trend of crappy season after crappy season. It's no wonder John Elway refused to play for him in 1983.

That was apparently enough for Irsay, who decided that when you're fielding the worst team in the league is a good time to ask for stadium renovations.

When the city told him what he could do with that, he famously said, "This is my G-ddamn team" and decided to move to Indy. Sound familiar, Houston?

The city, in a move that I would love to see these days, tried to file a motion to take over the team via eminent domain. Irsay packed up the infamous Mayflower moving trucks and split town before they could finish the paperwork.

Obviously, Irsay knew how to make friends. Let's recap. Trade a crappy team for a well established team - check. Trade away the city's most iconic player - check. Draft one of the best quarterbacks in history, even though he doesn't want to play for you and then trade him for 50 cents on the dollar - check. Move a beloved franchise by sneaking all the team gear out in the middle of the night - check.

I think the only place we, as a public, really missed out is by the fact that there was no social media back then. How fantastic would it have been to see #F*ckIrsay trending in Baltimore? Fortunately, we have his son to help us enjoy the brilliance of the Irsay name.

1. Speaking of which... It's the little things that make me smile. Like this.

2. Yikes. You know how many times the Texans have left Indianapolis victorious. The same as the number of times I've successfully hated the Texans to victory through one of these things.

3. Some folks'll never eat a skunk. What the hell is a Hoosier anyway? Honestly, nobody knows. The Indiana Historical Society has no idea, though they claim it to be a more romantic nickname than the other common definition of a country yokel. I'll let you decide. Yeah. I agree.

Both of my in-laws have their birthday in December, so we are having them over for a nice dinner. The menu includes braised short ribs, polenta, and arugula tossed in a simple lemon and olive oil dressing.

I braise my short ribs using a pretty traditional method. You can google it and find about a hundred recipes which include browning the ribs, sauteing carrots, celery, garlic, and onion, and then sticking it in the oven for a few hours with wine, broth, thyme, and stock.

That's a nice dinner, not a game day meal.

No, for game day, we're utilizing the leftovers for short rib sandwiches. Take the extra short ribs and heat them up in a skillet. Get some quality buns (this is a messy sandwich, so you want something that can hold up) and pile on the meat. Add some sauteed red onion and top with a mixture of horse radish and dijon mustard. I tell you what. This is a sandwich that will leave you speechless for a bit after you finish it.

THREE OF THESE STATEMENTS ABOUT INDIANA ARE MOSTLY TRUE

1. While the Colts celebrate Johnny Unitas as their own, Ol' High Top himself was so angry about the move to Indy that he only considered himself a member of the Baltimore Colts. Now, that's some logic you can set your watch to.

2. Mustaches in Indiana are illegal if the bearer has the habit of kissing other people. That explains Andrew Luck's neck beard.

3. Ever been driving with a woman under 17 who is not wearing shoes or socks? You dog, you! Well, in Indiana, you could be arrested and charged with statutory rape for such an act.

4. Jim Irsay has a life size portrait of Jerry Jones as a centaur over his desk.

"My mom grew up in Kansas, my dad in Indiana. They had boring childhoods" --Hunter Parrish

If you've paid close attention to this feature, you may have noticed that I have yet to present a lager in this space. That ends today. I've made it clear that I'm partial to American craft ales, but if you're going to venture into the world of lagers, your best bet is to travel to Germany (brew-ly speaking, of course... or not, if you're lucky).

This week we celebrate the pride of Munich with a Hofbrauhaus brew. Specifically, the dunkel. Dunkel means "dark" in German, but this beer is not nearly as dark as a stout or porter. It pours with a mahogany color and a thick head. The aroma is very malt forward as it feels like you're inhaling a cold mash. Unlike most of the ales I've previewed here, the flavor has that crispness that you'd attribute to a lager.

This beer has virtually no bitterness to it, but it's not overly sweet as can happen with malty brews. It is perfectly balanced and goes down extremely easy. This is truly a fantastic beer and six packs are not likely to last. 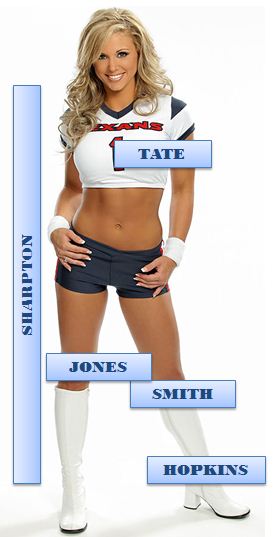 Greg Jones (Pondering the Future). Jones will be a free agent after the season. He's 32 years old and coming off a nondescript season with a terrible team. Best of luck to you Jonesey.

DeAndre Hopkins (Andre's Revenge) I wonder if Andre Johnson secretly hates DeAndre for only having to suffer half a season with #8 throwing him the ball.

Darryl Shaprton (WTF-itis) According to the Texans website, Sharpton hasn't participated in a full week of practice since a nasty battle with a cafeteria pizza ended his season in the 8th grade.

Ben Tate (Searching for a realtor) Did you read the MMBQ article on Tate? Dude's a badass, and my position that I hope some non-Texans pay him a lot of money this offseason has not changed.

Wade Smith (Fighting Irrelevance) Did you know that Wade Smith is still here? I tend to forget about him until he totally misses a block. I think about him a lot on Sundays.

Aubrayo Franklin (Remembering when BFD loved him so)

Samson Satele (I don't know who this guy is, but that's a cool name)