The Texans extend their losing streak to a franchise record of TWELVE, and Capt Ron chronicles the latest game against the Colts. 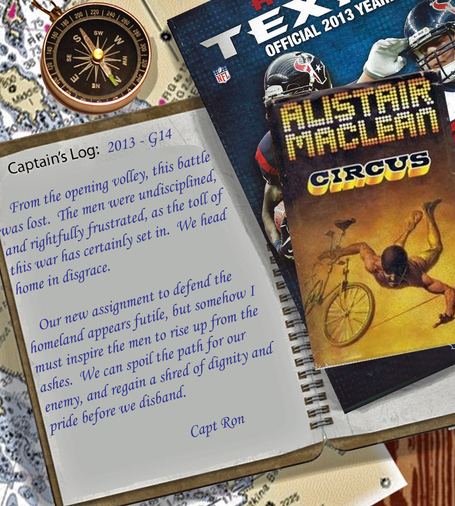 It is time to hand out orange peanuts, because this has truly become a circus.  There is no other way to describe what we are seeing the last two weeks as this team completely melts down.  I would love to see the Texans turn around and beat the Broncos to shake up the AFC playoff picture, but I can't imagine these guys getting things together for the last two games of this dreadful season.  I'm not going to descend into a negative article, because there really is no point in beating this horse to death.  As always, I'll try to tilt this toward humor as we cover the facts and opinions, and folks start mentally preparing for some time with family and friends over the next few days/weeks.

Before the game ended, I had already coined this week's installment of the Captain's Log "The Dirty Dozen."  Within the last 48 hours, just about every media outlet that covers the Texans used that phrase to describe this situation.  Instead of taking that well beaten path, I went with the circus theme to address this fiasco.  That makes twelve consecutive losses for the Texans this season and twelve consecutive losses to the Colts in Indianapolis.

I was curious if the Texans were the only NFL team that has never beaten the Colts in Indy.  After a bit of research, I discovered that since moving to Indianapolis in 1984, the Colts have yet to lose at home to the Texans, Packers and Vikings. They have played these teams in Indy and defeated them:

Before we get on with the stats from the game, there are two quotes I found interesting in how they apply to the Texans.  These are both from a former military leader who was known for his brash "tell it like it is" approach to motivating soldiers in battle.

If you tell people where to go, but not how to get there, you'll be amazed at the results.  - George S. Patton

In this example, I'd say this fits the Texans this year and the goal of "Super Bowl or bust," as we are certainly "amazed" at the results.  We are also appalled, and it is the exact opposite of what Patton suggested.  He implied that self-motivated, well-trained individuals will persevere and find a way to reach the goal.  However, these Texans players clearly lack direction and discipline.  This latest game shows that the entire coaching staff is in need of being replaced by more competent leaders who can develop individual players and units for success.

The test of success is not what you do when you are on top. Success is how high you bounce when you hit bottom.
Read more at http://www.brainyquote.com/quotes/quotes/g/georgespa142575.html#ScpgDyKjyA49y538.99

The test of success is not what you do when you are on top.  Success is how high you bounce when you hit bottom. - George S. Patton

At some point this team will finally hit rock bottom for this season.  How they recover next year will be the true test of each player who returns.  The new coaching staff will likely get some room for error, but not much.  Next year's results will also serve as the true legacy for Rick Smith, assuming he survives this free fall and helps to return this team to winning again.  If this team has the talent to win, we should see a bounce similar to the Kansas City Chiefs once we get a new coach and quarterback up to speed.  Let's hope the bounce is all the way to a championship in one to three years.

We'll have plenty of time to consider next year.  For now, I really do hope they find a way to knock down the Broncos next week.  Go Texans!

If you tell people where to go, but not how to get there, you'll be amazed at the results.


Read more at http://www.brainyquote.com/quotes/quotes/g/georgespa124616.html#c6RotHK4Db7dOpZ3.99
If you tell people where to go, but not how to get there, you'll be amazed at the results.
Read more at http://www.brainyquote.com/quotes/quotes/g/georgespa124616.html#c6RotHK4Db7dOpZ3.99

The Colts (9-5): Indy beat the Texans like rented mules and clinched the AFC South title for 2013. They now travel to Kansas City for a game that can greatly affect the playoff picture for the AFC.

The Titans (5-9): Tennessee lost to Arizona and now heads to Tarpsville to play the Jaguars.

The Jaguars (4-10) Jacksonville lost to the Bills and now hosts the Titans.

"I'm a doctor, not some ringmaster of a circus"

Quarterback Case Keenum underwent an MRI for a sprained thumb on his right hand (throwing hand).

"We don’t know the results yet," Phillips said. "He’ll be evaluated, but it’s a concern."

Ben Tate got a CT scan for his injured ribs.

"He got them banged up again," Phillips said.

Still no word on Owen Daniels returning to practice yet from I/R (designated to return):

We thought he might practice last week, but he wasn’t able to," Phillips said regarding Daniels. "So I think it’s still a ‘might situation’ this week as far as him practicing. Garrett Graham I didn’t mention, but he’s still sore. So he’s still iffy as far as this week is concerned."

Garrett Graham is suffering from a strained hamstring.

Darryl Sharpton wouldn't dare miss out on an injury report, so he is listed with a slight ankle sprain.

So there you have it folks, the near-end of season punch list of mass casualties for a team still searching for rock bottom in the worst season in their brief history. 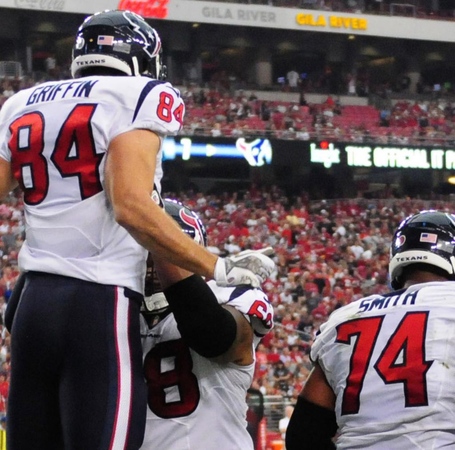 The lone bright spot on the day was a rookie tight end with 6 catches for 62 yards.

"It’s not pretty out there and everybody wants to win," Griffin said. "Everybody’s a competitor on this team. When things aren’t going right, tempers flare but that’s part of the game. We’ve got to come back and finish strong out here."

Honorable mention goes to Johnathan Joseph for his interception, which set up the only score in the game for the Texans--a Randy Bullock 49 yard field goal.  While we tour this positive results section in the thread, it is worth pointing out that Bullock has made his last nine field goals.

Another positive observation is that Vance Joseph may have finally dialed in the defensive play-calling later in the game, as Andrew Luck had no completions and zero yards passing in the fourth quarter. The Colts punted 3 times and were 0-of-3 on third down conversions.  So we have that going for us.

"I'm sorry I ruined your lives and crammed eleven cookies into the VCR."

28 penalties in the last two games totaling 291 yards.  That is quite a masterpiece!

Deepi Sidhu of the Mothership reports:

It was the fourth time having 14 penalties in a game in franchise history. Three of the four have occurred this season, all on the road: Week 15 at Indianapolis, Week 14 at Jacksonville, Week 3 at Baltimore.

The whole team was a mess this week, so there's no point in going down the long list of infractions.  I will take a moment and spotlight the most grievous of offenders, though. Eddie Pleasant, yet again, was flagged for holding on special teams.  This week it resulted in the offense starting at the 7 yard line instead of the 14 yard line.  On the first (and only) snap of that series, Case was stripped of the ball in the end zone and Duane Brown recovered the fumble for a Safety in favor of the Colts. 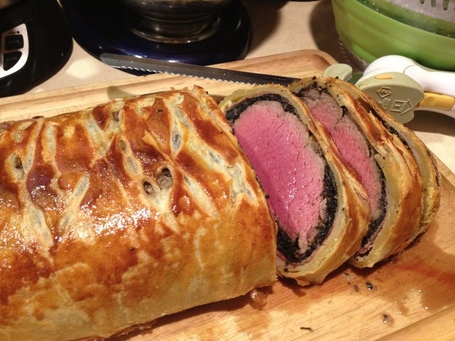 Don't panic!  It's nowhere near as difficult as you might imagine.  It is a great dish this time of year to share with friends and family.  I just cooked it last Saturday, and it was quite simple and delicious.  Even those who don't care for mushrooms enjoyed it.  Trust me, you'll impress them and eat like kings.  Try it and let me know how it worked out.

"This place reminds me of Santa's Workshop! Except it smells like mushrooms and everyone looks like they want to hurt me."

The Texans play their final home game of this season on Sunday, December 22nd at 12PM (CST) against the Denver Broncos at Reliant stadium.