No, Ninja. Tom Brady did not light you up in the second half because Bill Belichick was spying on the worst team in the NFL.

Share All sharing options for: Houston Texans Excuse Of The Week: Tonestradamus Edition

In his post-game comments following Sunday's loss to New England, Antonio Smith just had to pull the Spygate card to explain why one of the greatest quarterback-coach duos of all time was able to make halftime adjustments against the porous Houston Texans defense:

"Either teams are spying on us or scouting us . . . I don't know what it is," Smith said after Houston lost its 10th straight game, 34-31. "We had some ways that we were going to play this week that just got put in this week, and it was just miraculous that they changed up some things that they did on offense and keyed on what we put in this week to stop what they were doing.

"It was things that they had never done before out here. It just seems miraculous to me."

"You would have to be a descendant of Tonestradamus [Nostradamus] to know what we put in this week to be able to change that fast," Smith said. "It is a specific thing that was important to what we were going to do today, to how we would call the defense. They changed it up in a way to where you were in in-decision in calling the defense that way. There's no way . . . we have not done it ever before and they had never changed it ever before. So it was just kind of fishy how it got changed. It just let me know that something just ain't right."

No one else on the Texans defense backed up the comments. Because they are probably not true.

All that I care about is making sure the elitist New England media doesn't try to attack Ninja's inability to pronounce the name "Nostradamus." 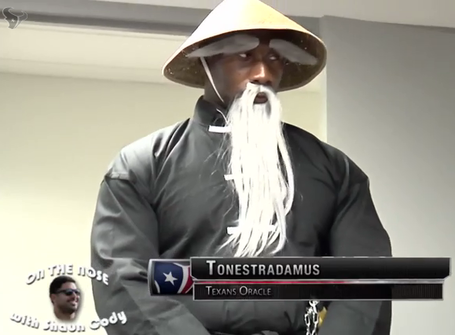 That reference is a joke. Ninja is a funny guy, after all, and he is getting nostalgic for those heady days in Houston when the team was winning and his friend Shaun Cody was employed.

The Tonstradamus episode appears to have been filmed after the Texans dismantled Baltimore at home last season. If only someone had been able to predict what was coming.