Oh, Manning. How we hate thee. Get your weekly dose of hate before the Texans game in the Pregame.

Share All sharing options for: The Pregame: Broncos @ Texans

And, if I were still in college, it might partially be because of their lenient rules on certain recreational agriculture.

But here's another truth: You didn't come to The Pregame to hear me be all "complimentary" and stuff. No, you came for hate. And I shall not let you down.

See, while I may have a soft spot for the city of Denver, they have done something that makes them a particularly easy hate target. Namely, Peyton F-ing Manning.

When I was a freshman at Northwestern, Peyton was a junior at Tennessee. My beloved Wildcats faced off against his Volunteers in the Citrus Bowl. I made the journey to the game and watched him put up 408 yards and 4 TDs.  I'm pretty sure that he kicked an old lady at half time, but I have no proof.

After this, he put up a 16-3 record against the Texans. Remember the Rosencopter? Yeah. He was there.

Even when I briefly decided to root for him in the Super Bowl against the Saints (I normally like the Saints, but I thought the Gregg Williams led defense was a bunch of jerks... guess I was right), Peyton again let me down.

Is that sportsmanlike? No. I admit it. But I don't care about that either. The beauty of sports and fandom is that it doesn't have to be rational. It's purely emotional. We can talk rationally about the skills of players and the future of the Texans.

This Sunday, though, it's emotional and it's personal. Screw that guy.

1. I can't HEAR you!!! Last time the Texans faced the Broncos, Joe Mays ripped off part of Matt Schaub's ear. I'm pretty sure that won't happen again, though I'm not ruling anything out this season.

2. Why would I want something awesome? Denver is the only city to ever turn down the Olympics. They were awarded the 1976 Winter Olympics, only to have 62% of voters reject the idea.

This week I am making an Indian curry that was a family recipe given to me from one of my Indian friends when I lived in Boston. I don't know exactly where this is from, but I believe it's a northern Indian curry.

It starts with chicken basted in yogurt, turmeric, tikka masala, and salt. This is roasted in a hot oven and then set aside. Then in a deep skillet, sautee red onion and an ancho chile in vegetable oil. When the onion starts to soften, add ginger, and garlic. After a bit, add a few tomatoes and keep cooking. Blend it all together (except the ancho... this is flavorful, but not spicy), return to the skillet, and add more turmeric and masala.

Simmer this concoction for a while and then add the chicken that has been cut into chunks. Cook this for about 15-20 minutes, salting to taste. When it's nearly done, add some red potato that has been boiled and chopped into chunks.

THREE OF THESE STATEMENTS ABOUT DENVER ARE MOSTLY TRUE

1. The area that is now Denver used to be three different cities before two were dropped in exchange for a barrel of whiskey. That's the type of long-term vision that made the city what it is today.

2. It is illegal in Denver to loan your vacuum cleaner to your next door neighbor. This law was enacted to limit the amount of suck in the city.

3. Denver was named Denver because city officials were trying to gain the favor of Kansas Territorial Governor James W. Denver.  Unbeknownst to those city officials, the governor had already retired. Recently, the Broncos tried to rename themselves the Tagliabues in an effort to curry favor from the commissioner's office.

4. John Elway brought Peyton Manning to the Broncos in order to ensure that his legacy as Denver's premier clutch playoff quarterback would remain untarnished.

"Don't break out the Cheetos" -- Colorado Governor, John Hinkenlooper after the decriminalization of recreational mari... wait... his name is Hinkenlooper?

With an Indian curry, we of course need an IPA. Actually, let's do it big and go with a double IPA. I'm repeating with the Weyerbacher brewery from Easton, PA and their Double Simcoe.

As the name implies, the beer is heavy with Simcoe hops. It has poor clarity, but the hop aroma is just brilliant. If you've ever held a handful of fresh hops, it's a reminiscent aroma. The flavor is again hop dominated (as one would expect with a double IPA), but the bitterness is not overwhelming.

At 9%, it's actually not overwhelmingly warm. This is a wonderful beer that you could easily drink a few of, but that would probably come back to haunt you. 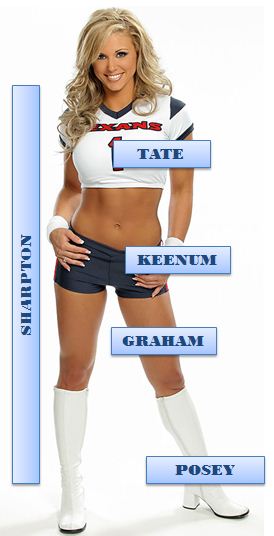 Case Keenum (#KeenumaniaOD). Keenum is again replaced by Matt Schaub, though this time it's because of a thumb injury instead of whatever lame excuse was used last time.

Darryl Shaprton (Why not?) According to the mothership, Sharpton actually participated in practice this week (though limited). Call me skeptical. I don't care if he's packaged in foam peanuts for a full offseason and fed unicorn blood intravenously. I'm keeping him on this list.

Ben Tate (End of the road). Ben Tate's season, and likely career as a Texan, has come to an end. I'm pouring my coffee on my office floor as I write this.

DeVier Posey (Wolverined) MDC should return soon now that he finally got Posey. And you thought it was Marciano that was keeping him away.

Trindon Holliday (Unable to travel without an adult)