The Pregame Week 17: Texans at Titans

Finish off a disappointing season with a familiar hate. Check out this week's version of The Pregame.

Share All sharing options for: The Pregame Week 17: Texans at Titans

And so the most disappointing season in Texans history comes to an end this weekend. There have been equally and even more futile teams in the team's short history, but no team has fallen so short of such lofty expectations.

As this season reaches its most ungratifying climax, we find ourselves faced with a most familiar foe. Well, at least we get it easy when it comes to hate.

If you need motivation to muster up hate for the BESFs, you should really consider your footballing affiliations. No amount of holiday spirit should soften that stance.

See, if not for their last minute "heroics" last week, the Texans would have already locked up the top seed and we could root for the victory this weekend, consequence-free.

Instead, we're left with this torn conflicting feeling as we watch this game. So let me help you with this.

As the game goes on, no matter what happens, remember that Tennessee is a dirt-hole full of meth-addicted, team stealing jerkwads.

Don't ever forget this.

So, if by some small miracle, the Texans manage to pull off a victory, revel in the fact that evil has been vanquished. If the more expected outcome should present itself, enjoy the fact that it comes with the top draft pick which will allow us to destroy their will for years to come.

So no matter what happens, we all win. Unless you're a BESF, in which case, all has been lost.

2. I wonder what they teach? Nashville calls itself "the Athens of the South" as a reference to its institutions of higher learning. This would suggest that there is an Athens of the north (there isn't... Athens itself sits less than 2 degrees north of Nashville) or that it has more institutions than other cities (it doesn't... there are 17, which is far fewer than, say, Boston).

3. Setting the Record Straight. Look, I know that Bud Adams died this year and I know that it's generally considered taboo to speak ill of those who have passed, but just because someone is no longer with us doesn't mean that the actions of their lives are wiped away. Bud Adams may have created the Oilers, but he also held the city hostage for upgrades to the Astrodome by threatening a move to Jacksonville. When the city ponied up, he waited only a few short years to further demand a new stadium. After the city said no, he dismantled the team and moved to Tennessee. Just as a man's great deeds should be remembered after his days are done, so should his vile ones, if only so that we can learn should we be faced with similar situations.

Every Christmas since, well, since I can remember, my family has followed the Cuban tradition of roasting a pig on Christmas Eve. Our method is very traditional and includes marinating the pig in mojo (sour orange, garlic, oregano, cumin) overnight before cooking in a caja china.

I took over the family tradition of leading the cook about ten years ago and it is a night that I look forward to every year. If done right, you will find yourself with moist, succulent, flavorful pork with an entertaining and dramatic presentation.

As you've certainly realized by now, I love to turn leftovers into sandwiches, and this is one of the best. If you don't feel like roasting a whole pig, stick a shoulder or tenderloin in a slow cooker with mojo (you can buy it bottled if you don't feel like making it) and a sliced onion. Sometimes I'll also add roasted garlic or ancho powder.

Slice it up and put it on Cuban bread, if you can find it. It doesn't need much else.

THREE OF THESE STATEMENTS ABOUT NASHVILLE ARE MOSTLY TRUE

1. The only animal that one is legally allowed to shoot from a moving automobile in Nashville is a whale. Sharks, however, are strictly off limits.

2. Nashville is actually the fourth city to serve as Tennessee's capital after Kingston, Knocksville, and Murfreesboro. Pretty sure that the whale law was a Nashville product.

3. It is actually legal in Tennessee to collect and consume roadkill. Even whales.

4. Before meeting his demise in the Battle of the Alamo, Davy Crockett was heard saying, "Perhaps if I die for Texas, God will forgive me for being born in Tennessee."

"Nashville is a river town with a long and sleazy history. It was a capital of commerce before the Civil War, when it became a vicious war zone and a swollen Mecca for gamblers and prostitutes. The population doubled during the war, and most of the newcomers had syphilis." --Hunter S. Thompson, explaining Nashville's nickname, "The City of 10,000 Whores"

I have some bad news for you. Unless you happen to be hanging out on the east cost of Florida, you cannot taste the beer of the week this week. That's because I'm highlighting my own homebrew to finalize the season.

For Christmas this year, we made a nice Irish red. I tried to make a beer that was very drinkable but that didn't have that Jolly Rancher thing going on that you find in some reds. We came up with a beer that is slightly browner than the traditional red and had a nice sweetness to it. It came in at about 5% and had just a hint of hop character.

And of course, we've named it Battle Red Brew. 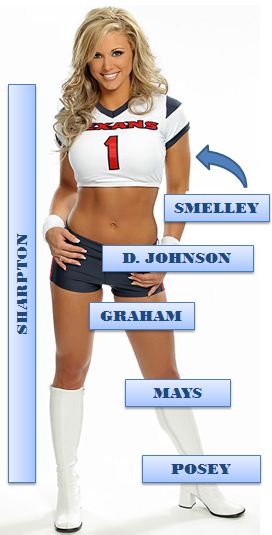 Dennis Johnson (DJ2K). Johnson hurt his hip and has not practiced this week. If only Cierre Wood didn't have that cigar

Darryl Shaprton (Duh). My daughter fell out of a chair this week and busted up her chin. I've been calling her Sharpton for the past few days.

Joe Mays (Choked on Schaub's ear). In a show of solidarity with his fellow ILB, Mays decided to finish the season on the injured list.

DeVier Posey (He's just shy) Every time you notice that Posey is still a Texan, he gets hurt again.

Brad Smelley (Zuh?) Who the heck is this guy? Apparently he's the backup FB. Who gives a crap.

Zach Brown (Losing the will to Tennessee)