The Texans extend their losing streak to a franchise record of FOURTEEN, and Capt Ron chronicles the latest game against the Titans. 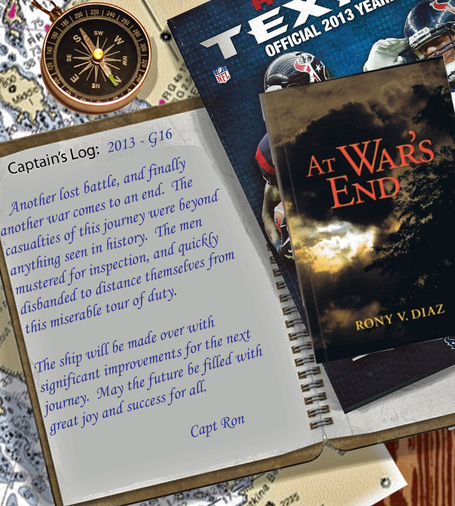 Well folks, the team did what was necessary in Tennessee for the 2014 Texans' organization to rebuild with full control of the draft. It's a bitter sweet consolation prize for an otherwise horrible season. Thanks to all of you who read the articles and post your thoughts here at BRB. I personally feel connected to so many of you through this blog, and I know that being here with you has helped me mentally survive when a team goes through such a difficult time like the Texans have in 2013. I am so relieved that this year is finally over!

We have a lot of excitement coming our way as the organization rebuilds. I greatly look forward to 2014, and hope to enjoy more fun memories with all of you. May you, your families and friends all have a very safe and happy transition to the new year! May 2014 be incredible for all, especially the Texans and their fans.

The Colts finished 11-5, won the division, and will host the Kansas City Chiefs in the wild card round of the playoffs. They are probably the only team in the AFC South not in search of a franchise quarterback.

The Titans ended the year 7-9 and will very likely be searching for a new starting quarterback for 2014.

The Jaguars wrapped up 2013 at 4-12, and continue to search for a winning formula to build that team. They most likely also need a new franchise quarterback.

This should get the furries going!

There are no reports of specific injuries to Texans players from this game.

Brian Cushing is 100% and already back to training to be ready for OTAs.

Danieal Manning is 100% and also getting in shape for next year. 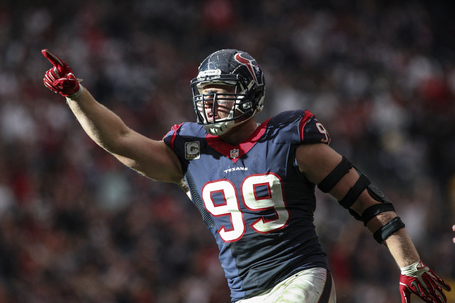 This guy's motor never stops, even in a year when the ship has been sinking from the first play of the season. He is a true competitor and a true champion. This was yet another game where he was the only defensive player with a sack. J.J. finished the season with 10.5 sacks, 80 tackles, and 7 passes defended. He gets my MVP vote for sure.

Deepi Sidhu reports from the Mothership:

Watt became just the second player in team history to have back-to-back seasons with 10-plus sacks.

'Dre had a really great season, and this should put to rest any concerns about his age. I think he has another solid three to five years in him before he retires. If it were possible, I'd consider a co-MVP this year for Andre Johnson.

Johnson, who caught 6 passes for 49 yards, finishes his fourth season with at least 100 receptions and 1,400 yards. He surpasses Jerry Rice and tying Marvin Harrison to become the only players to record four such season.

"Stand-up philosopher. I coalesce the vapors of human experience into a viable and meaningful comprehension."

Pardons for all at war's end. "Off with ya!"

These things are amazing for entertaining! They travel well for tailgating and ringing in the new year too. 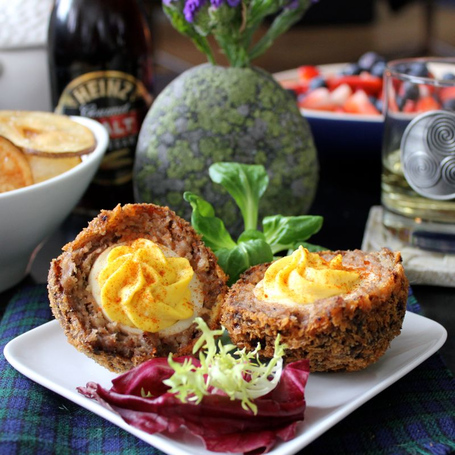 For the Scotch Eggs:

Flatten the sausage into thin circles.

Place an egg in the center of each round. Enclose each egg completely in the sausage.

Dredge the sausage-coated eggs in flour, dip them in the raw egg and then roll them in the Panko until they are entirely coated.

Fry Scotch Eggs two at a time for 10 minutes.

Transfer to paper towels and allow to cool to touch.

Halve the Scotch Eggs lengthwise and remove the yolks.

Mash the yolks with a fork and then place them in the bowl of a stand mixer.

Add the mayonnaise, vinegar, mustard, salt and pepper and mix until smooth.

Using a pastry bag or sandwich bag with an end snipped off, pipe the yolk mixture back into the Scotch Eggs.

Garnish with paprika and bacon crumbles.

Enjoy with a good micro-brew. I'm sure Vega would have the best recommendation to pair with this dish.

I realize the actual football content was light this week, but there really wasn't anything positive to analyze from this game. I did what I could to at least try and entertain as we close out 2013.

We'll have plenty to talk about as the Texans reboot for 2014 with a new head coach, QB and other key assignments. Stick around BRB for breaking news, thought provoking articles, and just good old fun and mayhem as the excitement builds toward the NFL draft. Oh, and the playoffs are here, so pick your favorite "B Team" and chat about it here with us.