The hate comes early this week as the Texans play the Jaguars on Thursday Night Football.

Share All sharing options for: The Pregame Week 14: Texans @ Jaguars

The history of various cities is quite fascinating. For example, we all know that Houston was the capital of the Republic of Texas and that it was located near the site of the pivotal Battle of San Jacinto.

Jacksonville started out in a similar manner as many other cities -- as a settlement for a native American people; the Timuca in this case.

That's about the high point of the story of Jacksonville.

The French were the first to colonize the area in 1564 before being taken over by the Spanish in 1565. Heck of a reign there by the French.

The Spanish then held the area until 1763 when they ceded it to the British after the French and Indian War. After the American Revolution, however, the area was returned to the Spanish.

I refer to it as "the area" because it wasn't a city yet. No, it was simply a fort and a road used for cattle transport.

It wasn't until 1821 when the area was ceded to the USA when someone presumably lost a bet and turned the cattle road into the aptly named town of Cowford.

Jacksonville then changed hands several times during the Civil War as it was still being used primarily as a cattle road.

So, there you have it. The area that is now known as Jacksonville originated as a short lived French fort, then became a cattle road, and then an embarrassment.

Come to think of it, Jacksonville's history of letting bulls walk all over it is a fairly fitting analogy for what's about to happen.

1. Was that really just two weeks ago? Ugh.

2. Tough Times Remember when the Jacksonville Jaguars only let Gary Walker and Seth Payne go in the Expansion Draft if the Texans agreed to take a gimpy Tony Boselli?

3. I have nothing left to say. Jacksonville's AFL team, the Sharks, has a mascot that is, oddly, not a shark. Instead it's a red blob called Chum. I don't even know what to say here. I mean, look at this thing. And read that story. It's terrible. Is the thought process really that a muppet representation of fish guts is more inspiring than an actual shark?

If you're anything like me (and 99% of the country), you probably ate too much on Thanksgiving. So to follow up, I'm generally looking for something a bit on the lighter side. Fortunately, Thanksgiving leftovers provide almost all you need.

It all starts with the turkey carcass. Don't throw that thing away for the racoons to chew up in your garbage. Instead, what I do is cut it in half (just because of size) and throw it in two separate pots. To each, I add garlic, onion, celery, carrot, bay leaves, pepper corns, and fresh parsley. Add 4 quarts of water to each pot and simmer for at least an hour. Strain and you should now have about 8 quarts of quality stock (and if you were smart enough to smoke your bird, you'll get some of that loveliness as well).

I then clean out one of the pots and sautee a new batch of garlic, onion, carrot, and celery. Add half of the stock and bring to a simmer (I freeze the rest of the stock in quart containers for use later). Add two potatoes cut into cubes and a cup of pearled barley. Let this simmer until the potatoes are cooked. Then add fresh parsley, thyme, paprika, peas, salt and pepper (you will need more salt and pepper than you probably think). If you want to be adventurous, you can also add some cayenne or simmer an ancho or guajillo pepper in there.

You now have a great pot of soup. If you want something a little heartier, let this simmer for another hour or two. The starches from the barley and potato will thicken this thing up to the point where it's like the inside of a pot pie, but without any cream, butter or flour. So it's a healthy, yet filling, stew.

THREE OF THESE STATEMENTS ABOUT COWFORD ARE MOSTLY TRUE

1. Greenbriar Road is said to be haunted by a glowing ball. Authorities once tried to cover the ball, but all tarps in the city were already in use.

2. The Otis Elevator Company has its headquarters in Jacksonville. In a one story building. This is great. I don't even have to make a joke here.

3. Jacksonville's namesake, Andrew Jackson, never once set foot in Jacksonville. This made him a perfect representation of the future Jaguars fan.

4. Roger Goodell once said that awarding Jacksonville the Super Bowl in 2005 was the result of a drunken bet where his buddy bet him he couldn't throw a successful Super Bowl in Jacksonville. Goodell paid the man only a month later.

I decided this week to go with something big, so I picked up a barleywine that I hadn't yet tasted: Blithering Idiot from Weyerbacher Brewing Company in Pennsylvania.

This is an English style barleywine, which means it is more malty and not very hoppy. The beer pours very red and murky and has almost no head at all. The aroma is very subdued, though there's a bit of complex fruit and toffee type of scents. The carbonation is a bit low and the caramel malts are very pronounced in the flavor.

At 11%, this beer is actually a bit on the light end for a barleywine. The alcohol is balanced by the caramel malts, but I must say I'm a bit disappointed by the beer. When I drink a barleywine, I want something big, powerful and complex. This beer falls a bit short. 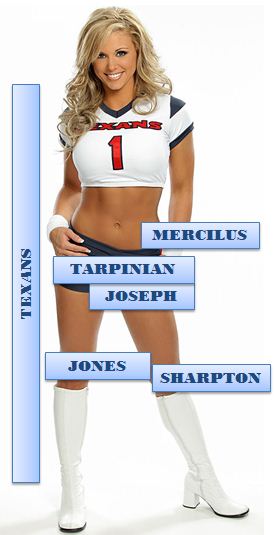 Greg Jones (Feeling left out of the injury party). Jones has been limited due to a knee injury and the fact that he somehow downgraded from the Jaguars.

Darryl Sharpton (Getting comfortable) Where else would he be?

Johnathan Joseph (Wondering what could have been) Joseph's not been able to play at the same level as he has his first year in Houston, but he's far from the biggest problem on the team.

Whitney Mercilus (Whatever) Mercilus played well last week, so he's probably not likely to figure into a game again until the playoffs. Oh... right...

Jeff Tarpinian (Family trouble) Tarpinian is just nervous playing in front of all his fellow tarps.

Josh Evans (are we still doing this)

Stephen Burton (I've lost my will to live)