The Texans extend their losing streak to a franchise record of ELEVEN, and Capt Ron chronicles the latest game against the Jaguars. 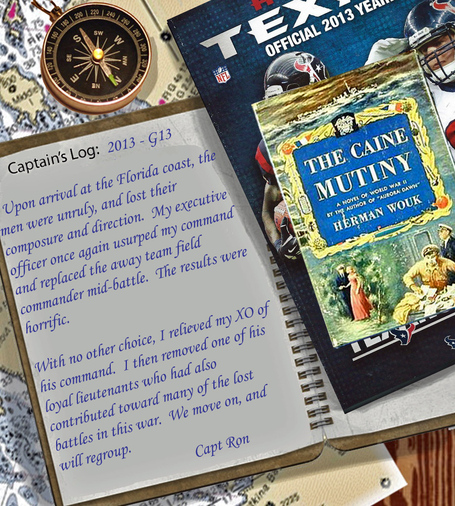 Well, that was embarrassing.  Not only were the Texans swept by the Jaguars, but they really came off looking chaotic and unprepared on national television....again.  Not to worry though, as the estimated viewership was at an incredible low:

It would seem that everyone, including Bob McNair, had moved on from Matt Schaub.  There almost seemed to be a prime directive to fully evaluate Case Keenum with the remaining games this season.  That makes good sense when you are facing a high draft pick decision and have the opportunity to select a rare defensive talent like Jadeveon Clowney or one of several highly ranked quarterbacks like Teddy Bridgewater.  With that type of opportunity looming just a few months away, it is imperative to know exactly what you have (or don't have) in Case Keenum.

#Texans' McNair went off script today when it came to Keenum. Clear he, others in organization already moved past Schaub. Kubiak hadn't.

Kubiak took a ton of heat from fans, including booing at Reliant Stadium, when he pulled Case out of the Raiders game and put in Matt Schaub.  Obviously he was alone in thinking that was a good idea again in the latest game in Jacksonville.  It might have been what he thought was best for trying to win the game, but the consensus is that we know Matt is struggling significantly this year, and the Texans absolutely must know what they have in Case before they enter the draft.  That decision to pull Case, combined with the reckless and undisciplined behavior from the team, is likely what sealed Kubiak's fate for early termination the next morning.  I don't know if the coach was being stubbornly defiant by changing quarterbacks or just didn't consider the bigger picture outside of the game.

"We’ve sort of had our ups and downs and the game against New England, we were in a very good position to win that game. Case (Keenum) was matching (Tom) Brady, in terms of possessions, going up and down the field scoring. That was very encouraging."

"Case (Keenum) is going to be the quarterback. We’re going to give him a chance to see how he can perform. I think the jury is still out. He’s got a lot of ability. He’s shown some flashes of brilliance and then he’s shown some rookie mistakes. We’ve got to see if we can improve, eliminate those mistakes, minimize those mistakes and continue some of the outstanding play that (we’ve) seen and see whether we think that he can be a starting quarterback in the NFL. At this point, we really don’t know."

And so begins the search for a new head coach for our Houston Texans.  We thank Coach Gary Kubiak for the good times and the two consecutive division titles.  Attending that first playoff game at Reliant will forever be an amazing memory.  I personally thank the coach for his constant composure as a gentleman.  It was so unique to have a hometown hero lead this team.  May his next assignment be one of great success, except when facing the Texans.

I suspect there was always a certain amount of restraint from fans and media with respect to criticizing Kubiak due to his polite nature and the hometown relationship.  That will most likely not be the case with the next head coach, as fans are going to be even more frustrated and candid in voicing their expectations and reactions.  I don't think there will be a long honeymoon period, as Texans' fans have pretty much had enough with promises about "next year."  The antici..............pation and excitement will build each day as the hunt begins.

To Owner Bob McNair, I thank him for being a "realist" in this situation and I offer this:

"The pessimist complains about the wind; the optimist expects it to change; the realist adjusts the sails."

The Colts (8-4): Indy beat Tennessee 22-14 and all but secured the AFC South title for 2013. They now travel to play the AFC North first place Bengals, who just beat the Chargers in San Diego.

The Titans (5-7): Tennessee lost to Indy and now heads to Denver to face the Broncos.

The Jaguars (4-9) The Texans won the "Bridgewater/Clowney Bowl" by losing to Jacksonville.  After a ten day break, the Jags will host the Buffalo Bills.

"I'm a doctor, not an executive recruiter!"

Due to the focus on the termination of the head coach and special teams coordinator, there have not been the usual press conferences to review details regarding player injury status.  I will update this section as information becomes available. 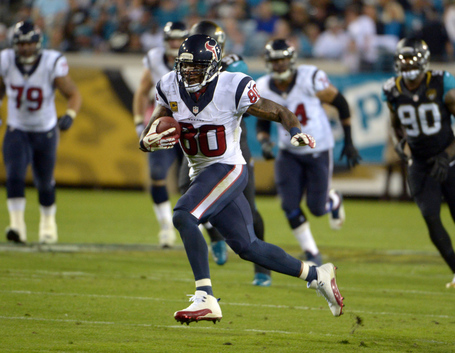 Andre has played at an elite level this year.  It seems unfair that 'Dre and J.J. Watt keep giving so much to every game, only to have the team fall short week after week in this disastrous season.  Nonetheless, we greatly enjoy watching this guy continue to set and shatter NFL records.

It was the 20th game in Johnson’s career with a game of at least 10 catches and 100 yards receiving, for the most in NFL history.

Johnson also tied Jerry Rice, whom he considers "the greatest receiver to ever play," with the most games of at least 10 receptions and 150 yards. Johnson and Rice both did so ten times in their careers.

Johnson’s 100-yard performance against Jacksonville was his sixth this season and the 50th of his career, which ties him with Don Maynard for the fifth-most in league history.

At this point, 'Dre is one of the few things that keep us tuning in as the Texans' season winds down.  Let's hope the G.O.A.T. continues to stay healthy and pushes these amazing NFL records further for several more years!

To say we need a broad brush here is an understatement.  I'm not sure there is a brig or stockade that could house the number of violators from this game.  Obviously D.J. Swearinger and Eddie Pleasant led the way this week with the brain dead stupidity, but they were far from alone as the Texans racked up 14 penalties for an incredible 177 yards.  That is more yardage than the Jaguars accumulated by rushing or by passing!  It is unacceptable, and it certainly contributed heavily toward the decision to terminate Coach Gary Kubiak and Coach Joe Marciano before the season came to a close.

Discipline will certainly be a key attribute of new head coach candidates.

Owner Bob McNair (During Friday's press conference, regarding the termination of the head coach)

"It’s just the inconsistency and the mental errors and the lack of discipline from time-to-time. Just didn’t see that we were progressing and showing improvement in those areas where we needed to show improvement."

"...there were a lot of other things that happened. 14 penalties - Things like that are just totally unacceptable."

In lieu of the reorganization taking place on the bridge, a rare liberty has been approved for the crew to indulge in alcoholic beverages until further notice.  With the cold weather pressing, here is a great cocktail to warm you up. 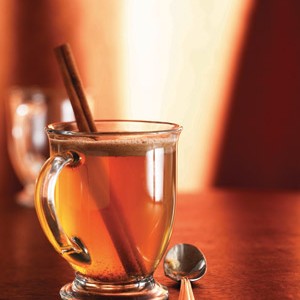 In a mug, dissolve the sugar in a little hot water, then add the rum and unsalted butter. Fill the mug with hot water and sprinkle a little nutmeg on top (optional).  Garnish with a cinnamon stick (optional).

You can substitute cider for the water, and add 1/2 teaspoon of cinnamon and clove mixture.  For anyone in the mood to truly entertain in style, you can put it all in a mug and jam a red-hot poker into it until it steams.  Imagine that you are slaying the Marciano Mug!

But what to eat, you ask?

Stuff a pork tenderloin with sliced pickled jalepenos and sliced onions that were tossed with a small amount of light olive oil.  Tie it with cooking twine to keep the goodies from escaping.  Rub the outside with light olive oil and cover with ancho chile powder and course salt.  Roast in the oven at 350 degrees in a roasting pan with a good bottle of beer (Shiner Bock works well) until the center of the thickest part of the meat reaches 160 degrees.  Remove from the oven and let it rest about fifteen minutes before slicing.  You can also smoke this for even greater flavor, or grill it on low heat if you need to keep the oven free for other items.

The Texans will be on the road again after a good ten day break.  They will visit the Indianapolis Colts at Lucas Oil Stadium on Sunday, December 15th.  Kickoff is at noon (CST) on CBS.