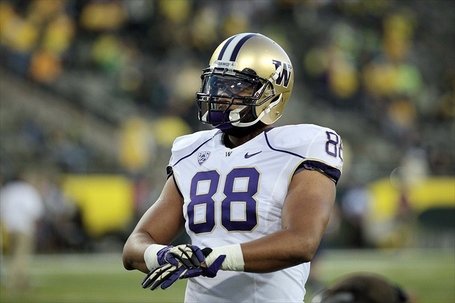 via www.draftbrowns.com ''Say hello to the offensive version of Jadeveon Clowney''

While it may not appear to be one of our most pressing needs it does have merit for inclusion here. Owen Daniels is returning from another injury and could become one of this teams many possible cap casualties this off-season. Looking at the depth chart Garrett Graham has proven useful if not mistake prone at times and Ryan Griffin hasn't got enough playing time for an accurate judgement to be made on his potential yet(Mind you it generally isn't considered good when this is the highlight of your season).

This years Tight End class is projected to have 3 top talents at the top of the group all of whom vary in size and ability. However one name in particular has caught my eye. 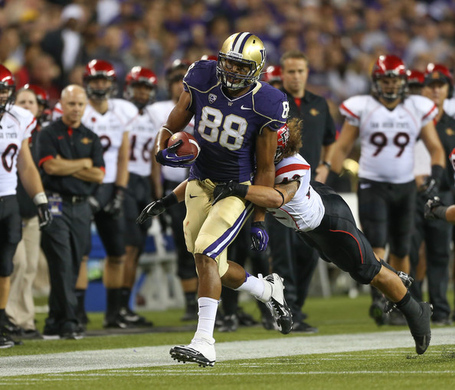 The Washington Tight End is nothing short of a freak of nature physically. 4 pounds heavier than Jadeveon Clowney, Seferian Jenkins came to prominence during his second season with Washington where he caught 69 passes for 852 yards and 7 TD's. This fantastic production lead to him being named as one of three finalists for the John Mackey award to the best Tight End in the country . This surge caused many to believe that ASJ would become the leading Tight End in this years class and follow on from his crazy year and become a real star. However things have not panned out as planned. He's seen a drop off in his production due to a changing in offensive scheme and now see's less targets go his way. Not only that but he was arrested for a DUI and served a day in jail earlier this year and was forced to have surgery on his pinkie finger earlier during the year. Regardless of these facts he's still managed to snag 6 TD passes and get be named a semi-finalist for this years John Mackey award.

What really excites me about ASJ is his skill set allows for him to constantly be on the field and maintain the same level of performance across all areas of play. First and foremost it's his combination of size(276lbs) and athleticism that make him such a useful piece in the blocking game. Very few linebackers clock in at the size of a ASJ which makes him just so dangerous especially against outside backers who rely on speed as their main pass rushing weapon. As soon as ASJ gets even remotely near them it's game over because he uses his sheer strength to maul players out of the play. These shows of strength are particularly evident in the run game where he really excels. His ability to seal the edge is really solid and what I like in particular is when Washington run single back sets with two TE's stacking on the left side.

In this example we can see the two TE's stacking on the left side with ASJ highlighted with his hand in the turf. As you can see the OLBs are getting read to jump the outside gaps. Now what's going to happen is the outside TE is going to take the outside backer while ASJ acts as the pseudo lead blocker in this play.

ASJ and the LT basically carry the DE out of the play. From here ASJ moves on to lead the way and block the inside backer.

He creates enough of a hole for the RB to break through for the first down. It's this multiple faceted use that's what so cool about him. You stack him beside any sort of tackle and that side instantly becomes a red carpet for any running back.

His work in pass protection needs a bit of work but he's got all the tools to succeed in that area also. It showed in the LSU game last year where he was matched up against Barkevious Mingo for the majority of the game. What Mingo did extremely well and what ASJ struggled to do was use his hands. Mingo would do a quick punch to gain separation from ASJ before using a quick step and active hands to fend off ASJ and get to the QB. It's a trait that seems to show itself a fair bit in pass protection. He doesn't seem to be able to leverage himself so that he and use his power to blow players away just like he does in the run game. His kick slide isn't much better......(ASJ is the one on the near side)

But it's his effectiveness in the passing game that really interests me. ASJ played basketball for the Huskies his freshman season at Washington. His size alone is enough to warrant throwing to him but add in the hands and leaping ability and you get stuff like this... It's these kind of catches that remind me of Tyler Eifert from last year in the way that he could have DB's draped all over him and he would just pull anything and everything down. His usage can even be stretched to the short pass and screen game. His ability to be able to be split out side and force the defense to make a decision. Do they commit a usually far smaller corner out to cover ASJ and hope the corner can single handedly cover him? Or do they bring safety help down to eliminate the threat? Because even if the CB is covering him the difference in height will usually be so great that the QB will just throw it his direction anyway and try to let him make a play. Perfect example of this ability to create mis-matches can be seen here.

That gif. is the exact reason why TE's and ASJ in particular are so dangerous. They force the opposing DB to play press man against him in order to not allow him to start generating forward momentum like in that clip. You see the corner playing off and giving ASJ a cushion and you just cannot do that. The DC in that situation is basically praying the route ASJ is going to run is either a quick out or a curl, that way the play either ends out of bounds or with ASJ having to turn up field and fight his way through more tacklers. Credit here to Keith Price for recognising the clear mis-match and exploiting it to it's fullest. What's more is that match-up's like these will appear at the NFL level also because there is no defender in the NFL today that I can think of that can match up against that size and athletic ability. I still have concerns over his speed and his route running but the tools are there for him to become one of the best tight ends in the league in a few years. 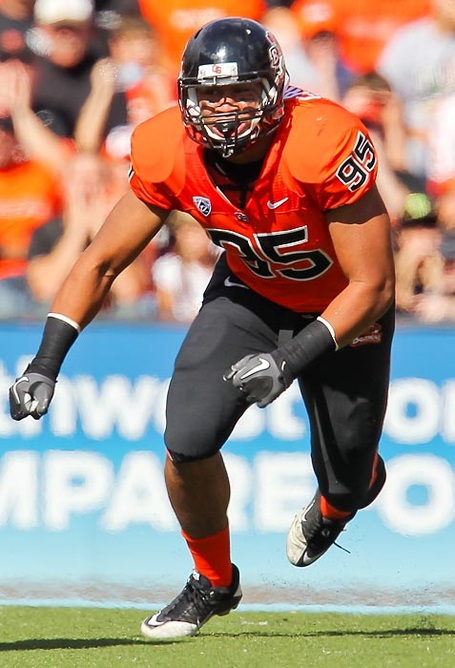 Up until the start of this year I had not heard of Crichton at all. But after checking out his stats during the 2012-13 season I decided it might be worth taking a look in this Oregon State pass rusher. Crichton burst onto the scene as a red shirt freshman and lead the PAC-12 with 6 forced fumbles to go along with his 14.5 tackles for a loss and his 6 sacks. His following season he upped his production the sack department managing 9 along with 17.5 tackles for a loss. This would lead Crichton to be named to the PAC-12 First Team. He would follow that up by adding 6.5 sacks and 14.0 tackles for a loss this season to go along with his inclusion in the PAC-12 Second Team.

If nothing else an NFL pass rusher can make himself useful solely on having an above average bull rush. From what i've seen of Crichton he posses the capabilities of pushing(and on certain occasions collapsing) the pocket. He has a decent ability to be able to get underneath a blockers arms and start pushing his blocker back. He's got solid upper body strength combined with a solid motor that makes him look like a crazed mad man on some of his rushing attempts. Which can often lead to plays like this:

However while this route 1 style of pass rushing may yield results like this in the short term is has more often than not lead to tunnel vision especially in the run game where discipline is a must.

This little clip in particular is what i'm talking about. Against teams like Utah who do utilise the read option it's of the utmost importance that the backside blitzer(Such as the position Crichton plays) does not just go barrelling into the backfield with his eyes firmly set on drilling either the QB or the RB. On rushes like that you're basically going for the all or nothing. Either you break-up the hand-off or impede the ball carriers progress to the point where secondary blitzers can then get into the backfield to stop the play. It's not just an isolated instance either he does this a lot.

What's frustrating is that he knows how to play the read option well also. He does it for quite a few of a plays where it's run against him.

He just seems to be trying to do to much when he should really be simplifying it and perfecting the skills he already has. He has a solid first step but he can't bend so his rips are no where near as effective. He doesn't really have that strong a swim move and he's not quick enough to get by as a speed rusher so for a lot of his attempts he'll end up over shooting the play and end up 2 or 3 yards behind the QB. His ability in the run game is suspect due to not showing enough consistency with the stack and shed. However what he does exceptionally well is use his first step to shoot the gaps in between the C and the RG or the A gap. Due to the usual lack of quickness or agility amongst most interior line men Crichton is able to explode out of the gates and use his power to drive into the back field and cause a tackle for a loss like he does here:

In many ways his strength allows him to line up as a 3 technique DT in the 4-3 and still maintain roughly the same effectiveness on the inside that he does on the outside. The big issues with Crichton is that he is rather limited technically but there is upside there for a team to consider. He brings a real relentlessness to his play and tenacity that will show in his violent use of the bull rush. I have concerns about him stepping outside into a 3-4 OLB in the NFL as it would be his first real taste of the position. There is potential there if some 4-3 team who's looking for a versatile D-Line man that can add physicality to the line and is willing to make an investment on him.

P.S Hope you enjoyed the read. I'm hoping to do something similar to this over the next few weeks but with different prospects. I apologise in advance if the gif. qualities are not to your standards. I was using a new gif capping software that's not really well optimised yet. Also if the loading time on the gif. 's are killing your computer just let us know.