Taking A Look At DVOA History For The Houston Texans

Share All sharing options for: Taking A Look At DVOA History For The Houston Texans

It's no secret that I'm a fan of utilizing Football Outsiders' Defense-Adjusted Value Over Average (DVOA) in analyzing the Houston Texans. I'm not the biggest DVOA fan or expert on staff, but I value it nonetheless.

I'm sure there are some wondering what DVOA actually is, and that's important since this post takes a look at it. You can find a more thorough answer here, but I'll provide a short summary below.

DVOA is a method of evaluating teams, units, or players. It takes every single play during the NFL season and compares each one to a league-average baseline based on situation. DVOA measures not just yardage, but yardage towards a first down: Five yards on third-and-4 are worth more than five yards on first-and-10 and much more than five yards on third-and-12. Red zone plays are worth more than other plays. Performance is also adjusted for the quality of the opponent. DVOA is a percentage, so a team with a DVOA of 10.0% is 10 percent better than the average team, and a quarterback with a DVOA of -20.0% is 20 percent worse than the average quarterback. Because DVOA measures scoring, defenses are better when they are negative.

Simple, right? Makes sense, right? It's a comparison to the average, adjusted to the situation and opponent. Granted, we won't look at percentages today, but it doesn't hurt to understand what we're talking about when we mention DVOA.

The great part of having a new franchise is that Football Outsiders has the entire franchise history at the tip of our fingertips. I figured it would be an interesting Friday exercise to look at the DVOA trends of our beloved Deep Steel Blue boys in chart and graph form. That's right, I graphed it for you. 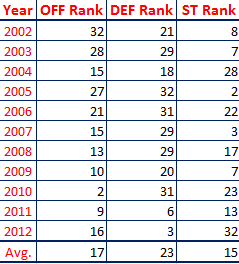 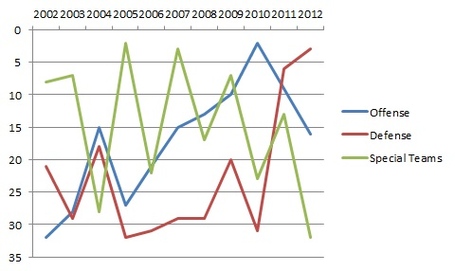 As I mentioned yesterday, I get the investment in defensive talent. The team, despite employing defensive-minded head coach Dom Capers, never enjoyed a good defense. Heck, even fielding an average defense was a lofty goal. It helps to have a defensive coordinator who can actually, you know, coordinate, but the increase in talent, including a 2012 total of eight first or second round starters, with a few more in reserve roles, didn't hurt. The jump has been incredible and didn't really suffer the dreaded second-year regression that many thought would occur. Regression could be in the forecast next season; still, with most of the same young talent in place, I would be surprised it they didn't finish top-10 again.

Offensively, there's a slight trend developing. After enjoying steady progression after the switch to head coach Gary Kubiak and quarterback Matt Schaub, the Texans' offense has regressed each of the past two seasons. Yes, some of the setback in 2011 was Schaub's injury and subsequent replacement by Matt Leinart and T.J. Yates, yet the regression continued into this season. It's hard, based off that chart, to say what caused the regression. It could be the loss of Eric Winston and Mike Brisiel, the disappearance of Ben Tate, the predictable playcalling, or some combination of the three. Whatever is the issue, the offense is trending negatively, is at lowest DVOA since the David Carr era -- the David Freakin' Carr era people -- , and the braintrust needs to stop the bleeding.

At first glance, you don't really see a trend in Joe Marciano's special teams DVOA. It's erratic. Good, bad, good, bad, good, bad. There seems to be no consistency to the unit. That makes some sense, as special teams talent is derived from the ever-changing faces of the reserve players. The only constants have been punters and kickers, all of whom are taught to focus on hang time as opposed to using the sidelines or end zones.

At second glance, you can see an overall downward curve to Marciano's special teams. The highs don't quite reach what they used to and they bottomed out to dead last this past season. Over the past eight seasons, many of which have been affected by changes to the wedge rule and kickoff yard lines, the special teams units have measured below average five times. Still, somehow, Marciano continues to hold his job -- even when 16 NFL teams changed special teams coordinators, just since the end of the 2012 season -- and hasn't even been assigned any sort of assistant coordinator to change things up. It's a confounding situation. The unit slowly sinks into the abyss.

How about you, BRBers? Do these DVOA numbers change your opinion on the current state of the Texans or do they only serve to reinforce your beliefs?