Whatever You Do, Don't Call Me Skip

Share All sharing options for: Whatever You Do, Don't Call Me Skip

My name is Bayless, and these are my boots. 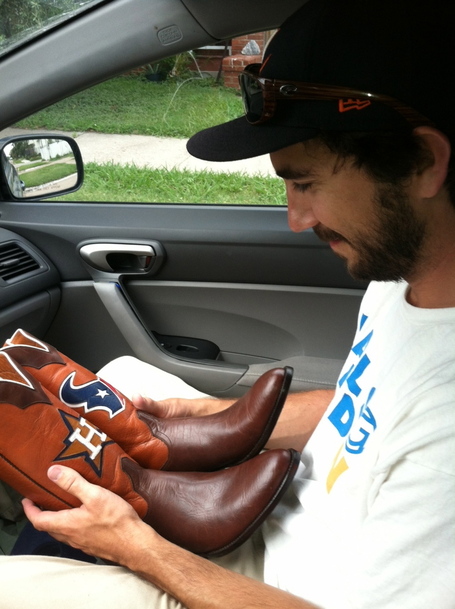 Even though I hardly wear boots, the mere act of possessing a pair like this justifies my inclusion on the writing staff of Battle Red Blog.

This thing here is my wallet. 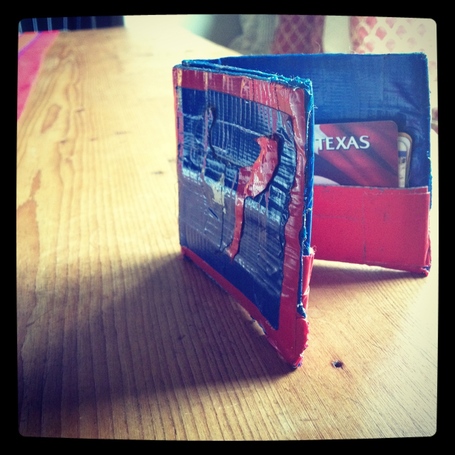 It's made of duct tape, which is good, since it's a sturdy material that will be up to the task of holding the stash of Battle Red Bucks I'm going to make as a result of joining the team. My forecast for the months ahead here in Austin is making things rain.

The boots, the wallet and I share similar creation myths (that we were all designed and custom made by native Houstonians) and M.O.s (repping Houston sports full time). No one in the state capital, though, really cares about such traits. Perhaps the people here don't find such traits weird enough. My neighbors are far more concerned with music, fixed gear bikes and eating locally. They also primarily like the Cowboys.

They really make me sick sometimes.

If I come across like someone trying to compensate for something, like a man who sounds unconfident in his status as a real Texans fan, it's because I don't want to be exposed as a fraud. A fan is someone whose quality of life is adversely affected by the poor play of the team for which he roots. That is absolutely me today. But it wasn't for the first several years of the team's existence.

I remember the days of the white helmets, Billy Miller and the David Carr BMW billboards, but there was no passion in those years. There was no stress. We could lose a game like this, and the only thing I'd do is write a few anti-Casserly emails and move on. "Black Cloud Bayless" did not come out after losses back then. It has nothing to do with being bandwagon, though. And I need to explain why.

I went away to school during an era before the advent of live streaming and smart phones. There was no YouTube in 2002, and there certainly was no site where you could sit in the first row. We didn't even text back then. The year I left Houston for college was the year the Texans were born, a momentous event back home that barely blipped the radar screen in Virginia. No one in Charlottesville seemed to care at all, in fact. That place was, is, and forever will be Redskin country (or to be more politically correct, a Hog Haven), a land where the buffalo herds ran wild, fire water flowed freely, and sports bars refused to devote even a single television to a lowly expansion franchise whose quarterback got sacked 76 times in 16 games.

In four years at UVa, I saw exactly one Texans game on TV. That win over Dallas was a great moment, but it wasn't enough to make me care.

So don't criticize me too hard for my lack of passion in those early years. It's not like I had another team or something. And by the way, Matt Schaub was my school's quarterback for two of those years, and he got dogged for being immobile even back then.

The college era apathy extended itself by a few years after graduation, as I walked the earth like Jules, bouncing around Europe, finding a temporary home in the Balkans and then straight up living in East Africa during a time in which there really was no way to watch the games from a foreign country. Just getting to watch the Super Bowl was an unimaginable luxury for me. The Texans? Everything I knew about them came from the recap stories on ESPN.com, and the regular emails from my increasingly exasperated, season-ticket holding father, The Bob, who was known to have taken a nap or two at Reliant back in those days. 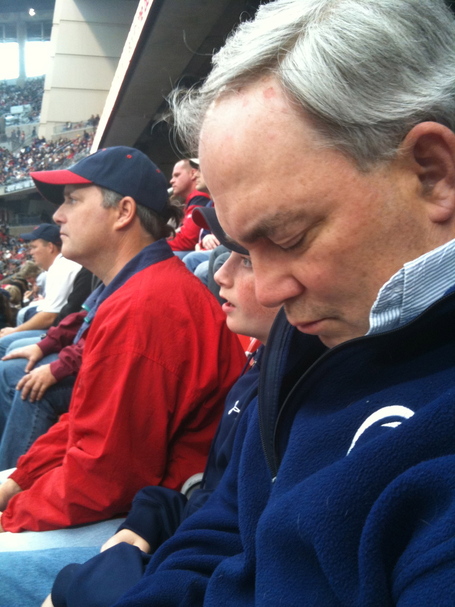 The Bob's tone was always negative when he talked Texans. Take this gem of an email dated Sept. 10, 2006, for example. All I did was type in "bob texans," and it was one of the earliest results that came back. It really puts that time into perspective:

Bayless,
The Texans looked bad. NO defensive line pressure on McNabb. He had alllllllll day to throw. Mario Williams was taken out on passing downs in the second half!!! Carr doesn't look downfield. I think he may be permanently destroyed from 4 years of being sacked.

*****
It wasn't until I came back home and moved to Austin in time for the 2009 season that I really started to care. That was the year of anyone named Kris or Chris Brown touching things and causing negative results: missing huge field goals (twice), fumbling away wins on the goal line and even the incident with Rihanna. Any one of those three games goes the other way, and the Texans finish 10-6 and make the playoffs. That would have forever branded me a bandwagon fan. Which is why I thank God for Kris/Chris Brown (the football players.) They made it possible for me to have that special experience of being a Texans fan in 2010. They introduced Black Cloud Bayless to the NFL.
The memories of 2010 are painful. But for me, they were necessary. I had to go through that in order to feel like I was a part of this thing. I had to experience the loss at San Diego. I had to know that it was possible to collapse the way we collapsed in New York. That the OT thriller against Baltimore would clearly go the way of the Ravens. And in easily the swiftest death blow to the balls I have ever experienced as a sports fan, the memory of that obnoxious, yellow-skinned Jaguar mascot running into the end zone in celebration of Glover Quinn's TD spike to Mike Thomas.

When you watch that highlight now, though, don't you just think to yourself, "It was all worth it"?

I just hope you didn't have to endure a decade of it. The Bob agrees.