Continued reports out of Baltimore indicate that the Texans remain a front runner - if not the front runner - in the Ed Reed Sweepstakes. We've been down this road before. Best track to take this time around is to not pay any attention, and wait for Elvis' agent to fax us the news that number 20 is wearing Deep Steel Blue.

Share All sharing options for: Battle Red News Wire: The Return of #ReedWatch Won't Leave Me Feeling Blue This Time

#ReedWatch ended for me last Friday afternoon with some major Battle Blue Balls. Not since my high school girlfriend, who wanted to wait until marriage, have I spent a weekend hobbling around as much as I did this past one. Neither revisiting that memory nor subjecting myself to another round of piqued expectations and sharp, physical pain was especially high on my list when I started writing on Monday. However, this column published last night in The Baltimore Sun forced my hand.

One of the main sources we've been following through this soap opera is a beat reporter for the Sun named Aaron Wilson. Wilson is the self-proclaimed @RavensInsider, and he has a solid reputation for being on top of his game. The first six paragraphs of his latest piece are designed to make us think Reed actually still wants to play for Houston:

As the Houston Texans continue to haggle with the agent for veteran free safety Ed Reed after his visit Friday, the Super Bowl champion Ravens haven't closed the door on trying to retain the former NFL Defensive Player of the Year.

To characterize the situation as a true financial competition would be a bit of an overstatement, though.

The Ravens' tight salary-cap situation could preclude them from making Reed a major negotiating priority. Plus, the 34-year's old [sic] age, durability concerns and decline in range could work against a reunion with the Ravens.

The Ravens would like to have Reed back, but not for $6 million annually and definitely not for the $7.2 million he made in the final year of his expired six-year, $44.5 million contract.

As for the Texans, a league source with knowledge of the situation characterized the Texans' initial three-year offer as low enough that a fast deal was unrealistic. Talks are ongoing with the Texans and Reed's agent, David Dunn, who has kept Ravens officials informed of what's going on as both teams and Dunn attend the NFL owners meetings in Phoenix.

Players for both the Ravens and Texans remain hopeful that Reed chooses their team, but it appears that the Texans are willing to commit more money to the nine-time Pro Bowl selection.

I see only two actual possibilities:

1) This is a well-orchestrated plan by Reed and his newly-hired agent designed to leverage the Texans' interest in the Hall of Fame safety in order to milk every last drop out of Ravens owner Steve Bisciotti.

2) Aaron Wilson is a real life Scott Templeton from "The Wire," searching for that big story that starts simple and metastasizes into something he never could have predicted.

The Wire — Gus Haynes Gets It Right (via TheStochasticSister)

Same newspaper, same too-good-to-be-true tale that turned out to be false, both white guys. The similarities are endless.

I'm over #ReedWatch. Someone just email me if he signs.

The NFL: It's Not the NHL Just Yet

The good news from the owners meeting currently underway in Phoenix: Roger Goodell said Monday that the postseason will remain something that is hard to make in 2013. The bad news: playoff expansion is probably coming at some point.

A Minneapolis judge issued a landmark verdict against the NFL on Monday that struck a blow against the league's coffers. Jim Marshall hopes the ruling will resonate far longer and far more deeply than this play from 1964.

People wanting to profit from footage like this will now actually have to pay Marshall for it. That includes the NFL. Marshall and a group of five other former players - Hall of Famer Elvin Bethea and our own Dan Pastorini among them - filed a class action lawsuit against the league in 2009 in an attempt to gain some control over the usage of their images and likenesses without their consent. After four years and millions of dollars in legal fees, Goodell acts like it was his idea all along:

"We look forward to building an unprecedented new relationship with retired players that will benefit everybody, especially those who need extra medical or financial assistance." - Statement by Roger Goodell, March 18, 2013

Assuming everything is finalized as scheduled in late August, two basic things will come of this:

It does make me worry, though, about former Oilers punter/general Houston sports legend Cliff Parsley, and whether or not he will now come after me for using his likeness as my Facebook profile picture without permission. 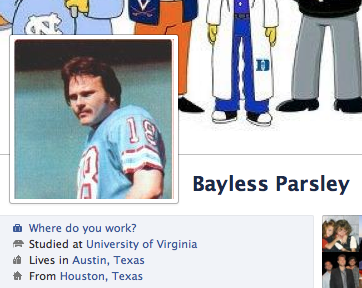 If anyone knows where I can get a Parsley Luv Ya Blue throwback, by the way, holler at me. I've already got the mustache.
*****
Dumb and Dumervil
Elivs Dumervil lost out on $8 million because his agent didn't have a fax machine. Elvis Dumervil lost out on $8 million because his agent did not have a fax machine. This story is way stale by now, but it just hasn't gotten nearly enough play for us to be able to move on from it.
If you read one article about how Elvis' Agent is Dumbervil blew $8 million for his client, this Bill Barnwell piece from Monday is sufficient, while the always knowledgeable Joel Corry delivers the former agent's take on how the former Broncos linebacker should proceed from here. The mental image of Black Elvis personally rushing over to his neighborhood Kinko's to send in a fax with an $8 million deadline looming is simply fantastic. Can you imagine being the guy in front of him in line during a moment like that? ("No, no, I just need to make some copies. You go ahead.")
Lost in the absurd theater of the situation is the fact that the way salaries work in the NFL has gotten completely out of whack. In a league where every play could be a player's last, the salary cap plus the lack of guaranteed contracts has warped the system so much that still productive players in their late 20's are now being cut on the reg. Contracts that last longer than one year might as well be written in pencil, a few exceptions (Flaccough, cough) aside. CBS Sports' Mike Freeman highlights the Dumervil incident as a way of describing a seemingly untenable situation looming when the next round of CBA negotiations take place, and why it could - and probably should, to be honest - result in a player strike.
*****
Pancake Humor
Make fun of John McClain all you want, but the guy is unquestionably "old fat guy funny." It's the same kind of humor that always thrives at barbecues. Like this, for example:

I'd feel better about Jacoby Jones winning DWTS if @vontaleach44 was his partner. Nobody leads better than Vonta.

*****
The Middle East: My Favorite Country
Last week, Anquan Boldin was in the great nation of "Africa." This week, it's J.J. Watt's turn to play the "Most Generic Term Possible to Describe a Foreign Land in Which an NFL Player is Visiting to Do Some Good Deed" game. He's in "the Middle East" right now along with Denver Broncos cornerback Champ Bailey, Cleveland Browns linebacker D'Qwell Jackson, Tampa Bay Buccaneers guard David Joseph, Denver Broncos linebacker Von Miller and Carolina Panthers wide receiver Steve Smith. I spent 15 minutes on Google looking for which countries and/or bases they were actually visiting, because last I checked, Afghanistan is not in the MIddle East. Not one article stated the answer. The official USO page did write that security concerns prohibited them from publishing where exactly they would be going, but only in advance. That trip has been going on for over a week now. Where are they?
Our media's grasp on the complexities of geopolitics is so impressive, it makes me proud to be a North American.
*****
"That, Is, A, FUMBLE!"
Count me as one of the people that thought the Tom Brady "tuck rule" had been changed over 10 years ago. I feel like a lot of people think that along with me. And we would be wrong. Only now are NFL owners getting around to changing it.
It's always fun to go back and watch clips of historic drives, especially when broadcast by the radio announcers of the team that got completely jobbed.

The dialogue that begins at the 2:00 mark was worth the time it took to do the transcription. It picks up shortly after Woodson knocks the ball loose, which of course, the Raiders recover.
Main announcer: "The play is gonnna be reviewed, though, Greg."
Sidekick announcer: "Why?"
(NOTE: This line - "Why?" - best captures the ridiculous notion that Brady did anything but fumble when applying a basic smell test to the play. It was so beyond comprehension to an Oakland radio broadcaster that this play could be called an incomplete pass that he asked why the play was going to be reviewed.)
Main announcer: "It's upstairs, upstairs is gonna review it, [to see] whether it was a fumble or not, I guess."
...
Main announcer: "The field call was that it was a clean fumble.
Sidekick announcer: "Right."
Main announcer: "Uhhh, hold on there. Walt Coleman, the referee, is going into the monitor's booth. (Replay of Brady drop back appears on screen.) Here it is: Brady's back to pass... (audible roar of home crowds echoes in the distance) .... aaand .... no, that's a fumble!"
(The crowd only gets louder at this point, while the sidekick announcer keeps repeating the word "no," almost as if he thinks that saying it as loud as possible and as often as possible are the keys to preventing the play from being over turned.)
Main announcers: "The crowd's reacting because [Brady] pumped! But he, he , he, he's, THAT'S A FUMBLE! That is a fumble."
Only, it wasn't. And Robert Kraft loved it:

"...whatever the rule is, it is," Kraft said in a recent interview with ESPN. "I will forever ... I have a picture, a big photograph in my office that Jon Gruden gave me with the snow coming down, and [Patriots quarterback Tom Brady] in that position. He signed it, 'It was a fumble.'"

So Matthew Hasselbeck goes to Indianapolis, Ryan Fitzpatrick to Tennessee and QB shuffle goes on.

And of course, I leave you with another Texans Instagram Moment:

Duane Brown, just chillin' with Snoop and Omar. At SXSW. Why was I not invited, Duane? 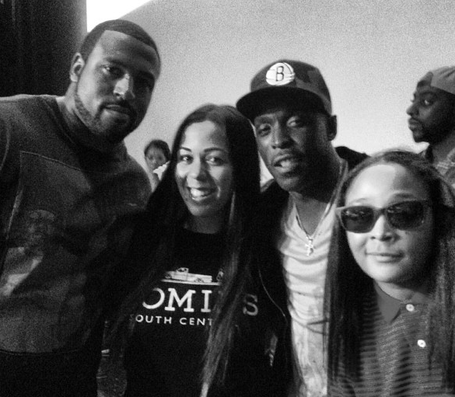