The Titans and Colts have spent big so far. Some would say too much, but you have to be willing to spend to get the players you want. Let's take a look at just how much they've spent.

Looking at this list, the first thing I notice is the average age of the acquisitions. No one will be older than 29 by the time the 2013 season starts. Also, other than Landry, most of these names are relatively unknown but that fits the theme of the new-look Colts, perfectly. Do you know who led the Colt's in tackles last year with 145? Some guy from the Canadian Football League named Jerrell Freeman.

My point is that while general manager Ryan Grigson might have spent a little heavily on unknowns (particularly Walden), it would be unwise for the Texans and the rest of the NFL to underestimate them. I would keep my eye on Jean-Francois. He has been seasoning under the stalwart 49ers defense for the past four years and could be primed for a break out year as a starter.

"Ricky is a quick, aggressive and extremely powerful player… at 26 years old, we feel the arrow is pointing straight up and we’re looking forward to him making a big impact for us this coming season."

Toler and the re-signed Butler could be strong assets alongside Vontae Davis. According to Pro Football Focus, Toler and Butler carried QB ratings of 51.5 and 39.5, good for 5th and 2nd best, respectively, in 2012.

The Colts' just announced the signing of 38 year-old quarterback Matt Hasslebeck. Another slick move by Grigson. Hasslebeck was more than just a mentor, according to his former teammate, Jake Locker. Andrew Luck will certainly appreciate this kind of support behind him.

"I think he's affected my life more off the field than he has on. He's just a great guy, a guy that I'm very thankful to have a friendship with. And, yeah, he's been a blessing in my life."

If Grigson can manage another stellar NFL Draft and get heavy contributions from a handful of these free agents, he'll be an early favorite to win NFL Executive of the Year, again.

Alongside Levitre and Wilson, the Titans are adding quarterback Ryan Fitzpatrick to the list of players taken from the Buffalo Bills. Is 90 year-old owner Bud Adams STILL carrying the grudge against the Bills for the '93 playoff game? Probably. Remember Adams flipping the bird at the Bills four years ago?

I've already discussed Levitre and Walker, here, but the Shonn Greene addition shall be interesting to watch. With oft-injured Locker putting up mediocre numbers thus far, the Titans are hoping Greene will add the thunder to Chris Johnson's lightning. Harkening back to the days of LenDale White, perhaps scaling back Johnson's workload will give him better running room.

Sammie Hill is a 300+ pound defensive tackle that the Titans are hoping will be a force in the middle, rotating with Jurrell Casey and Karl Klug.

"The guy’s about 300 — and we don’t ask — but 330 or so, a guy we played against this year. (He’s) hard to move, can play the nose tackle, can play the "three" technique, can cave the pocket in. There’s nothing worse for an offensive line, as Andy (Levitre) knows and I know from playing, than to have a guy that size pushing you and closing the pocket. It makes the quarterback uncomfortable."

Could Hill have been the quencher for our NT lust?

That's it for this week. The Jaguars have done next to nothing, so far. #REEDWATCH marches on for the Texans, whether we like it or not. I'll leave you with a great picture of J.J. Watt visiting troops in the Middle East via the Houston Texans blog. 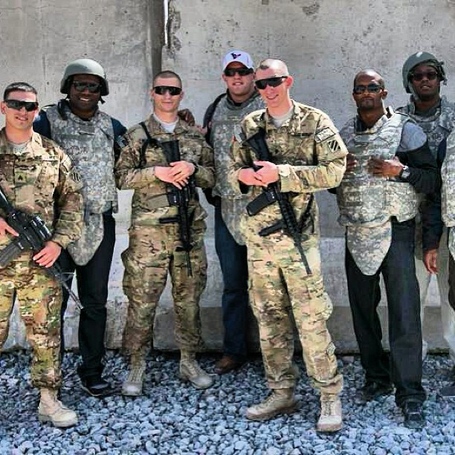