Battle Red Newswire: There is Life Outside of Football

And it's all going down in Mexico City tonight. Take a gander at what's going on in today's Battle Red News Wire.

Share All sharing options for: Battle Red Newswire: There is Life Outside of Football

It's getting to be that time of the offseason when being solely interested in football starts to get a little boring. There is only so much you can read about the draft before you're just ready for it to happen already. Only so many discussions about the holes confronting the Texans next season, or current players' brains in 20 years. Free agency can certainly be exciting but increasingly less so as things like #BattleReedWatch turn to #Heyward-BeyWatch. I'm all for that latter show but would prefer it be about something other than just a single dude, especially one drawing interest from a landlocked team.

We all love football, but come on. Let's watch the NCAA Tournament. Or a Heat game. Or - not sure if you're into this or not - soccer.

Notice I didn't call it "football." That's because I know who I am and I know where I'm from. In America, we call soccer soccer, speed bumps speed bumps and freedom freedom.

Most of you probably missed Friday's U.S.-Costa Rica match up, a game played in conditions so epic that even the Weather Channel's website featured a short report on the result. All the Shane Lechler hoopla and general social plans that prevent Americans from watching soccer on a Friday night may have prevented you from witnessing that spectacle but won't prevent you from watching tonight's game in Mexico City (ESPN, 9:30 p.m. CDT). It's going to be a big night with the U.S. is coming off its first ever win at the Azteca last August and still seeking its first ever win there during a World Cup qualifier.

Tonight is the third of each side's ten-game hexagonal schedule - the second and final round of qualifying for Brazil - and Mexico badly needs the three points after failing to pick up wins in either of its first two matches. The U.S., meanwhile, always loves reminding Mexico of who is more badass than who. As fans of a team whose name comes from the state that defeated Santa Anna's army, we should all rally around the flag in support of this general mission.

My buddy Andrew's dog Cushing was successfully reunited with his owner on Monday after a three-day disappearance. 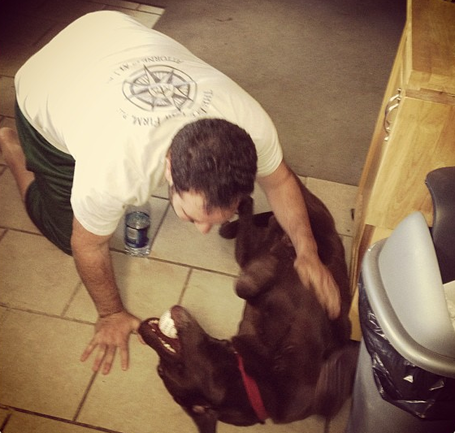 Cush was returned home as healthy as he could be. Let us hope this is a symbol for how a certain Texans inside linebacker will respond after missing much of 2012 with injury.

It seems like yesterday that I was threatening to buy a #10 customizable Texans jersey online and pay to have "V. Young" ironed on the back. That was my idea for a unique and expensive form of protest in the wake of the decision to draft Mario Wililams. Despite everything that has gone down in the past seven years, I still regret not doing this.

VY has lost more money than I will make in my lifetime. In an attempt to get back into football, he will be working out at the Texas Pro Day Tuesday. I had an offer from a friend who works for the UT Athletic Department to "get me in" to watch it, but I passed. I'm good on preserving my UT-related memories of Vince to things like this, baaaby:

You're hearing it here first: VY will play in the NFL again. And it will be for the Raiders. Word on the street is that quarterback Carson Palmer's reported refusal to restructure a contract that is set to pay him a $13 million base salary in 2013 will lead to his being cut by the team. Not even a $9.34 million dead money cap hit may save Palmer from hitting the open market, meaning backup Terrelle Pryor will be the man to whom Oakland would be turning things over next season.

Oakland is rumored to be in the market for a Geno Smith draft pick, but who says he'll be ready to start Week 1? Vince Young will play quarterback in the NFL this season, and it will be in the Silver and Black.

Vince Young in Turks and Caicos (via bytesmurf)

Watch that video and tell me you don't agree.

Free agent cornerback Terence Newman learned a valuable lesson about respect on Monday: his agent, Ben Dogra, has little of it for him. That fact was made clear by the priority Dogra's firm placed on getting Elvis Dumervil his new five-year, $35 million deal with Baltimore, a contract negotiation that apparently left Newman trying in vain to get his own agent to answer his phone calls.

What a difference two years make, when even free agent cornerback Nnamdi Asomugha has yet to find someone willing to buy six vowels (though San Francisco and New Orleans are said to be the two most interested in doing so).

Departing Texas safety Kenny Vaccaro posted his invite letter to the NFL Draft on Instagram. It was allegedly written by Roger Goodell himself. Here is the letter's second paragraph:

"As a result, I am extending an invitation to you and your family to join us at the draft on Thursday, April 25 at Radio City Music Hall in New York City. Many NFL players - including Eric Berry, Adrian Peterson and Robert Griffin III - began their careers by being introduced at the draft in New York."

Of all the players. Eric Berry. First on the list. That's all I have to say about this issue.

I don't know who Giorgio Tavecchio is, but I like him. I like him a lot. Would be fine with the Texans bringing him on just for the ability to gain a Twitter following in Italy.

If this is what it takes to ensure the Colts don't make a run at Victor Cruz, I'm fine with it. Darrius Heyward-Bey will be plenty fast to burn our secondary, but at least he won't rub it in with a salsa dance in the end zone.

Questions about his back or not, would you have paid Patriots right tackle Sebastian Vollmer a maximum of $27 million over four years to protect Tom Brady from the pass rush he can see? So would I.