The Ramblings Of The Newest Mad Man

Battle Red Blog looks into the mouth of madness and pulls out another writer.

Share All sharing options for: The Ramblings Of The Newest Mad Man

I would like to show you a photo. That's me there in my father's arm. I'm just over a year old in 1989, a fan from almost day one. As you would probably guess, I have to give full credit for my fandom to my father. My father, John, whose true passions have always been rock music and a close second - sports. He was raised in the stands of RFK Stadium watching the Redskins and Senators, later the Orioles as franchise relocation reared its ugly head. I was told stories of Doug Williams limping his way through Super Bowl XXII, the Washington Capitals' four overtime epic that lasted till the morning of Easter, the times when Washington D.C. caught "Bullet Fever". Those tales were my bedtime stories, my bonding moments, and my soul-consuming passion after awhile. I'm still that happy kid waiting outside the stadium to watch Houston play. 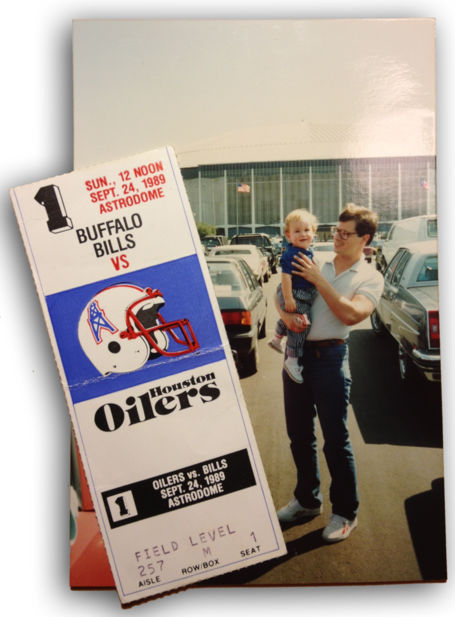 My family moved to Texas about the same time that photo was taken. My dad gave up his allegiance to D.C. teams and went headfirst into following the Astros and Rockets. I gladly and wholeheartedly followed, not truly knowing what it meant to be on a Houston bandwagon all day, every day. Houston will forever be the underdog; the national spotlight will always go elsewhere for its stars and stories. I point in the direction of Jeremy Lin for an example of the national news vacuum that is Houston. I believe that my fellow Houstonians and I have come to terms with the reality of being an underdog. It's easy to be fan of the top dog, but even sweeter when underdog comes out on top.

Now, moving on! Lets take that young boy who loves sports, loves Houston, and strap him in the Clockwork Orange chair for twenty-plus years. Feed him only ESPN, fantasy sports, and endless games of all kinds to warp his fragile little mind. Don't forget to send him off to Austin for four years, let him wear burnt orange and get an education. Make sure he works for the basketball team at Texas, because he couldn't go five seconds without being around sports. He'll learn that everybody in the Big XII is actually nice, except Oklahoma. Even that one agriculture and mechanics school has nice people; strange people, but still nice. Finally, have him move back to Houston after school because watching another Cowboys game over the Texans would be unbearable. There you have it, the recipe for the crazy man that now metaphorically stands before you.

Where do the Texans and football in general come in on all this? Frankly, I don't remember too much of the Oilers. My last memory was a pre-season game against the Chargers being canceled because of the condition of the Astroturf. Some time after that, the Oilers were in Tennessee and Bud Adams evolved into the devil. Once the Texans were announced, I was writing "Texans" and drawing the bull on my paper footballs in middle school classes. The Texans were still a distant dream in those days. After their first win against the Cowboys on opening night in 2002, it felt like I was living a dream. I can still picture Billy Miller stretching across that goal line and David Carr celebrating the victory. From that day, I was hooked. My father's Redskins and my mother's Packers may have held me over when the Oilers left, but no more. I was a Texans fan, bred to hate Dallas on top of that.

Unfortunately, the next five seasons were more like the ESPN NFL Draft commercial where David Carr lined up under center with no guards or tackles. (Sadly I couldn't find clip of said commercial for reference.) With the dawn of the Matt Schaub era, I've watched my clunker of a team evolve into a true contender. At the same time, I've watched the bandwagon get so full that I'm pretty sure the wheels have fallen off. Nothing has brought me more joy then to watch the Texans actually win in real life as opposed to only winning when I was behind the sticks on Madden.

I hope I've given you as the reader a better picture of myself. I'm ecstatic to be able to further my madness on this national forum for the Texans. It's a privilege to do so. I am also a huge Astros, Rockets, and Dynamo fan. I will be writing for the Astros' SB Nation blog, The Crawfish Boxes, this season as well. If a Houston team or a UT game is on, I'm probably watching it and tweeting about it. Hit me on my Twitter or any other social media tool for that matter (if it's new and interesting, I probably have a profile and it's D_More55). I'm always glad to chat. I've waxed poetically long enough. Need to get back to Jacoby Jones bashing.