Do you understand how the salary cap works? Neither did I until yesterday. Learn why Joe Flacco's contract is a big chicken nugget of suck for Baltimore, and why I'm actually a big fan of Matt Schaub's contract.

Share All sharing options for: 2013 NFL Free Agency: Joe Flacco Is About To Make It Rain In ... Delaware

When I was 19, I dated a girl from Vermont. We were planning a road trip from Virginia to her house in Shelburne that spring, and I asked something about being able to visit Delaware while we were there.

"Where exactly do you think Delaware is?" she asked.

"Next to Vermont, right?"

"No," the worldly 21-year-old said, probably wondering how I'd gotten accepted into college. "Delaware does not border Vermont."

It was the first time I'd ever really thought about Delaware as something that actually existed, a place you could actually visit.

Try to find a famous Delawarean on Google. You can't, because there aren't any. Obscure signers of the Declaration of Independence and the guy who developed nylon for DuPont don't really do it for me. Nor does Blue Hen lacrosse. Delaware is boring and forgettable, and if you're from there, so are you. That's why all Delawareans should feel extremely thankful for the existence of Ray Rice, Rahim Moore and Jacoby Jones. These guys are as responsible for their state finally getting on the map as Flacco himself, a man who will soon have more money than the guy who invented the chicken nugget. That's no small feat in the eyes of many Baltimore residents.

Flacco took a gamble at the end of the 2011 season, turning down a contract extension that would have paid him in the ballpark of $15 million a year. Say what you will about the guy, but he clearly won big on that gamble. The protests of advanced stats geeks have not affected Flacco's opinion of his self worth. Ask him today about his decision making process last offseason, and he'll tell you, "I thought I was worth more." Whether you agree with him or not, he was right. He was worth much, much more. The good people at NFL Philosophy have done a great job helping us break down just how much more.

Flacco's new deal is for six years and $120.6 million. He received a $29 million signing bonus, money that is obviously guaranteed, and which will make him a rich man even if he never wins another road playoff game. Also fully guaranteed is $30 million of his base salary (not the $52 million that has been widely reported; the cause for confusion was that the remaining $22 million is only guaranteed in the event of an injury. If the Ravens were to cut him for any other reason, they could avoid paying him that money.).

The most obvious thing when you look at the chart below is how much the current terms of the deal would hurt the Baltimore Ravens were Joe Flacco to still be their quarterback in 2016 under the terms of his new extension. His salary cap hit in that year alone would be $28.58 million. (For frame of reference, the latest estimates have the 2013 salary cap at $123 million. It will not be that much higher three years from now.) All the money due to him after 2015 will be shuffled around and restructured in some way to cope with this fact. It is not advisable to have nearly a quarter of your team's salary invested in one player. 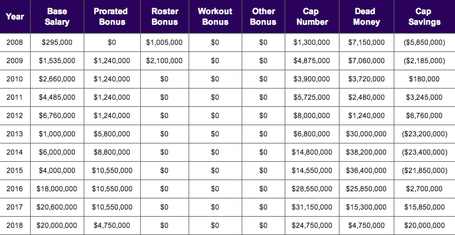 For fellow salary cap novices, allow me to explain.

Joe Flacco will obviously not be making $28.58 million in 2016. That's just what the imaginary loan officers at the Salary Cap Bank will be billing the Ravens in that season for having Flacco on the roster. His base salary will be a healthy $18 million that year, but the various bonuses embedded in his deal will make it feel a little too healthy in the eyes of the front office.

First, that massive signing bonus. The NFL Collective Bargaining Agreement mandates that all signing bonuses be prorated over a period no longer than five years when counting a player's respective cap number. (Contracts shorter than five years see signing bonuses prorated over the duration of the contract.) It's the kind of accounting rule that would inspire a bevy of angry poster boards at an Occupy protest if Goldman was caught doing it, but it's the way the NFL works. If Flacco gets a $29 million signing bonus, and one-fifth of that is $5.8 million, then $5.8 million is the prorated charge the Salary Cap Bank will add to his base salary every year through 2017.

But that's not it. Flacco is also in line to receive an option bonus in both 2014 and 2015. That money will be paid out in individual lump sums, but like the signing bonus, will be prorated out in terms of the effect on his cap number. As less than five years will remain on the deal by that point, they will stretch out over the duration of the contract, and will be added to the tally every year. The 2014 option bonus will pay him $15 million (prorated figure: $3 million), whereas in 2015, he "gets" an additional $7 million (prorated figure: $1.75 million).

That is going to buy a lot of 10-piece nuggets for Mr. Flacco.

So we have the scaling base salaries (starting at a pedestrian $1 million next season and reaching as high as $20.6 million in 2017 before falling to $20 million in 2018), the prorated signing bonus figure (which only disappears in 2018, the final year of the contract) and the two prorated option bonus numbers. All of this ensures that in no season of the new deal will the Salary Cap Bank be billing the Ravens for Flacco's base salary alone.

Like many things in life, these figures add up. And like many long term contracts given to quarterbacks who heavily inflate their market value by winning a Super Bowl MVP, the cumulative effect makes this Raven look very much like an albatross with talons wrapped firmly around Ozzie Newsome's neck.

I'm not even sure if albatrosses have talons. If they do, they're wrapped firmly around GM Ozzie Newsome's neck.

So, how to pry them off? Do what debt-riddled governments do: find creative ways to delay the pain. This is why big NFL contracts are so often restructured or extended - it dilutes the amount for which the Salary Cap Bank will invoice a team in the present moment. This is especially helpful for teams that are trying to make that one last run (or two, or three). You can handle a terrible season (or two, or three) if it means winning the Super Bowl now. And honestly, I can't say that I find that much fault in this mode of thinking. #YOLO, right?

There are two primary methods teams use to delay the pain. One way is to extend a deal. This lessens a player's annual cap hits in the near term by spreading money out over more years. Often, a player agrees to this in exchange for more of that money being converted into guaranteed dollars. Sometimes a team will refuse and cut the player instead. (Depending on the "dead money" hit, that may be prohibitively expensive. More on that below.) Extending contracts for accounting purposes can be dangerous, though - that is the quickest way to end up on the hook for Flacco cap hits long after he's departed.

Another way to delay the pain that works just as well as contract extensions is to simply take the base salary and magically convert a portion of it into a signing bonus. Teams love this option because it immediately decreases the cap hit they take in the near term without adding years to a preexisting deal. Players love it because they get more guaranteed money up front. The Salary Cap Bank either loves or hates it, depending on how much influence you believe the Deutsche Bundesbank wields over this imaginary entity. The magically created signing bonus money, you see, becomes a whole new pile of guaranteed money that gets prorated out and applied to future seasons.

Remember that thing about prorated figures adding up? Talons. Albatrosses have got to have talons.

"But they can just cut him," you say. Sure. But that brings up the issue of dead money, another term that I had never really heard of until I became a football expert overnight last week. Dead money is the one-time cap charge that a team incurs when they cut or trade a player under contract. To calculate any particular player's dead money figure, you simply add up all the remaining prorated bonus figures yet to be accounted for with the Salary Cap Bank.

Here is a hypothetical: Joe Flacco doesn't play like the most valuable quarterback in NFL history over the next few seasons, and the Ravens decide they would prefer to part ways with him. Flacco's dead money figure would make it more expensive, cap wise, to cut him than to keep him around in each of the next three seasons. Baltimore is banking on the fact that they won't want to cut their Super Bowl winning quarterback within the next three years, of course, which is a reasonable position to take. But if you recall how giddy most Houston Texans fans were about Matt Schaub before his foot injury in 2011, and during the team's 11-1 start in 2012 as well, you know what "NFL" really stands for: Not For Long. Things can change quickly in this league.

Flacco's dead money figure only becomes less than the cap charge for keeping him in 2016, year four of the contract. But it's not by much. Under the deal's current terms, it would still cost $25,850,000 against the cap to get rid of him that year. Of course, there is likely an unspoken understanding that the Ravens will restructure his contract before then. A potential other option - which is hard to envision in the still heady aftermath of a successful Super Bowl campaign - would be to make Flacco a June 1 cut at that time. This is basically a loophole in the system, whereby if you cut a player on a certain date, you can spread the dead money cap hit over a two-year span to soften the blow.

I'm tired. I'm sure you are too. I'm grateful to my Battle Red Brother MDC for helping me understand what the hell the deal is with the salary cap. If I made any mistakes, please, by all means, tar and feather me in the comments section. Somehow I managed to write nearly 5,000 words on a blog about the Texans that hardly even mentions the Texans. So let me bring it home for you: the contract extension Matt Schaub signed in September, as bad as it appears in the wake of his disastrous finish to the 2012 season, is way, way preferable to Joe Flacco's.

Take a look for yourself, now that you're also an expert. We're not wedded to Matt Schaub like Baltimore is wedded to Joe Flacco. But then again, I can't talk too much. We have letter jackets, and the Ravens have rings.

Personally, I'm happy Schaub signed it, if only because it allows me to share with you this two-hand slam dunk intro to the story John McClain wrote when it went down:

No wonder quarterback Matt Schaub got off to a three-for-seven start in a scoreless first quarter for the Texans in their regular-season opener against the Miami Dolphins. Schaub's right hand must have been a little stiff from signing his new four-year, $62 million contract extension that includes $24.75 million guaranteed and a $15.5 million average per year.

Kudos, John. And kudos to you, Joe Flacco. I'm sure the trickle down effect will make itself felt soon somewhere in ... Delaware.