Is Ben Jones living the life? I would say so, yes. The same could not have been said for Dante Stallworth during his ill-fated hot air balloon ride that he opens up for in today's Newswire. Don't even get me started on the Pat White situation.

The slow offseason continues this week for the Texans, but there is some seriously interesting stuff going down in Washington D.C., if you stay with me.

Earl puts the "I.T." in Mitchell

Texans nose tackle Earl Mitchell isn't one for intermediate steps when it comes to technology. The Houston native is showing this offseason that he's ready to take The Leap in his fourth season. Hyperlinks? Please. He's going straight to multimedia as a means of transmitting information.

By the way, couldn't Mark Cuban have just made the announcement that he would seriously consider drafting Brittney Griner only one day earlier? One day. He made the statement on April 2. One. Day.

On second thought, perhaps I shouldn't have de-pledged from that fraternity when I was in college

Right guard Ben Jones is suffering from the back to school blues. The second year player presumably left Georgia with a few credits remaining, and wants to get his degree this offseason.

I wish I didn't have school during my off season

It's hard to feel sorry for the guy, though. He's a professional athlete, he's spending his free time back in college (something I would pay to be able to do this instant), and he gets to chill with "his KD ladies" on the reg. 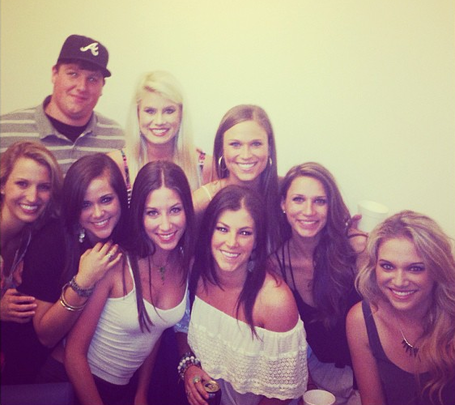 Remember this event if Andy Dalton gets hurt

Yes, this is Texans news. Everybody knows who the Texans play in the Wild Card round. That's just what happens when the Texans go to the playoffs.

The Washington Redskins have been actively trying in recent days to make sure that for every quality quarterback on their roster, they sign one who is complete shit. It's sort of a yin-yang system that the Shanahans have drawn up, as they understand that seemingly opposite or contrary forces are interconnected and interdependent in the natural world. These complementary forces interact to form a whole greater than either separate part - a dynamic system they believe will help Robert Griffin III's surgically repaired knee heal in time for Week 1.

The Redskins are staying true to color with their yin-yang quarterback system. Opposite the rehabbing RGIII is Rex Grossman, who signed a one-year contract on Wednesday to return to Washington for a fourth consecutive season. Opposite Kirk Cousins is the returning Pat White, who is making his NFL comeback on a one-year deal he signed on Wednesday as well.

Poor Vince Young. About the only thing in the world I have in common with Skip "You Have Ruined My Name" Bayless is our love for VY. And when I read about new contracts for Rex Grossman, or Pat White getting a second chance, I just feel bad for the guy. Why can't he be the one the Redskins give a second third fourth chance?

Maybe I just answered my own question.

Pat White: There Are No Good Conclusions Here, Buddy.

Say what you will about Vince Young, but at least you can't accuse him of what many are thinking - and few are saying publicly - about Pat White. This piece by Nathan Fenno in The Washington Times, normally a paper I do not care for much, is a must read. It's something I can't believe isn't being written on all the major outlets, though Ross Tucker and Mike Florio have addressed the issue.

First, watch this. It's a play from the Dolphins' final game of the 2009 season, White's rookie year.

It hurts to watch that hit: helmet-to-temple, the kind of blow that always makes you cringe the most. Ike Taylor walked away without injury, though perhaps he was seeing a few stars; White never played another down in the NFL. The 44th overall draft pick just a few months before, his pro career came to an end with a stat line that Colin Kaepernick could surpass in less than a quarter: 0-for-5 passing, with 21 carries for 81 yards. It hurts to watch that clip even more when you read that.

Last year, the former West Virginia star joined the ranks of over 4,000 other former NFL players who are taking part in a class action lawsuit against the NFL that seeks to collect damages for the traumatic brain injuries they suffered during their playing days. In White's filing, his attorneys included a detailed list of the symptoms his brief playing career had produced: "cognitive and other difficulties, severe headaches, speech issues, memory loss, depression, isolation, mental anguish and diminished self-esteem."

This was six months ago. Yesterday, White became the third former player who rejoined an NFL team despite having previously signed up for a class-action suit seeking damages from the NFL due to the concussion issue. The other two before him - Brett Romberg and Patrick Chukwurah - didn't even withdraw their names from the suit before stepping back on the field. How that's allowed by the collective bargaining agreement, I have no idea, but you tell me what is more troubling: a player seemingly lying about his injuries to get paid, or, as is seemingly the case for Romberg, knowing full well what is happening to your brain, suing the league for not warning you about it, and still coming back to play again?

There are only a few possibilities that I can think up when it comes to White's situation:

1) Pat White never had traumatic brain injuries. He was lying in order to get money.

2) Pat White had traumatic brain injuries, and they magically disappeared within the last six months.

3) Pat White had traumatic brain injuries and is now lying about his recovery in order to come back and play. For money? For the love of the game? I haven't walked in his shoes. In this scenario, the Redskins have muzzled Dr. James Andrews and replaced him with a doctor whose morals are on par with those of James Woods from "Any Given Sunday." (NOTE: How is his "These men are warriors!" line not on YouTube? It is one of the best scenes from the whole movie.)

4) Pat White had traumatic brain injuries and is now lying about his recovery in order to come back and play. For money? For the love of the game? I haven't walked in his shoes. In this scenario, the Redskins have muzzled Dr. James Andrews and replaced him with a doctor whose ability to stand up for his principles is on par with that of Matthew Modine from "Any Given Sunday."

The must-read piece in The Washington Times seems to think it's the first scenario. The majority of the media seems to be operating on the assumption that no. 2 is the explanation, with only brief mentions of the issue before going into detailed analyses of how White may help provide the Redskins' depth in the read option offense. Me? I'm pretty skeptical of no. 2, and would be pretty disillusioned to learn that any of the other three are the case.

Which is why the Redskins should sign Vince Young. He puts the "Y" in either yin or yang, whichever it is that he would play in relation to Cousins.

And now, something 1,000 times worse than anything relating to Pat White

Dante Stallworth watches that video of Pat White getting knocked out and carted off the field and laughs. He almost died by the force of a blow he described to former teammate Wes Welker as "1,000 times worse" than the hardest hit he'd ever taken on a football field.

Take a moment to read about the worst hot air balloon ride ever, as described by the man who survived it.

"I've played professional football for 10 years and I've never been carted off the football field," he told paramedics who arrived on the scene. "Now, after a couple hours in a hot air balloon, I'm getting airlifted off a farm."

The man was literally on fire. His hot air balloon got caught in power lines due to the expert stewardship by a pilot who, of course, escaped injury. Just thinking about it makes me shudder. I have been on a hot air balloon before, but it was in the Serengeti, during the time when I lived in Tanzania. If we had crashed, there would have been no paramedics. I would have just gotten eaten by all the lions we flew over.

Q: "Hey Carson, are you concerned at all about playing behind an offensive line that allowed a league-leading 58 sacks last year?"

That is a lie.