Battle Red Newswire: Playtime Is Over

Rookie camp is done with, but dat #GrindFlu is spreading. Check out today's Battle Red Newswire.

Share All sharing options for: Battle Red Newswire: Playtime Is Over

For those who love their mothers more than Corzo's writing, it's Monday now. You no longer have an excuse for not having read his Day 2 rookie mini-camp roundup. Go read it now.

After that, read this brief rundown on rookie camp by Nick Scurfield.

You should all be caught up now on how the new guys look so far. There is an early buzz surrounding DeAndre Hopkins, just as advertised. D.J. Swearinger is apparently acting like a veteran out there already, fitting for a man who is so sick with that #GrindFlu. And converted outside linebacker Trevardo Williams sounds like he's ready to play above his fourth round label.

I don't know about you, but I'm already in #HUNTMODE. Playtime is over.

This palmetto-themed rivalry/friendship brewing between our top two draft picks is going to be the source of much enjoyment over the coming years.

Both are rocking dreads under their new Deep Steel Blue helmets; both are freakishly gifted in athletic ability; and both sick with that #GrindFlu. It's all I can talk about these days whenever the subject of football comes up.

Hopkins had some very impressive catches. A nice one handed catch early in the session. Stared down Swearinger after one. #Texans

Can't report what was said during practice, but it's fun watching @nukdabomb and @jungleboi_swagg go at it. Hope they don't change. #Texans 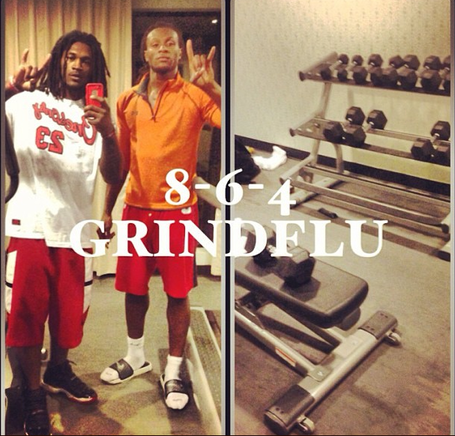 And I have to add the caption, because I can't impart the brilliance of the Emoji script in normal words.

Swearinger and Hopkins both laughed after practice about this little rivalry they've got going. #Texans

I vote that we make the slightly modified Hook 'em Horns hand signal officially our thing, regardless of what Kubiak thinks about it. We need a hand signal.

Then there is Sam Montgomery, a Sonic Assassin to rival the Ninja, and a 22-year-old man who needs his old friend from high school around to keep him in check:

"We have very different personalities," Swearinger said. "[Montgomery] is older but it's more like I'm the big brother. I have to keep him in line a lot. But it's good that we're on the same team so I could be his big brother."

Montgomery's selection on draft day did not elicit very much excitement from certain quarters around here, and his detractors are probably taking a lot of pleasure in hearing Gary Kubiak say that fourth round pick Trevardo Williams is a little bit ahead of the third rounder who wants to be known as the Sonic Assassin.

To be fair, Montgomery suffered a slightly strained back at rookie camp Friday morning, an injury Kubiak attributed to the artificial turf in the Texans' indoor facility. And as TexansDC just noted, Montgomery's reputation of being a lazy quitter is probably unfair. But he'll need to prove it in order to convince the Google gods to stop reinforcing the stereotype.

Never want the words "taking plays off" to come up before the name of your team. That is bad. For Sonic to shake this stigma, he just needs to start drinking after Swearinger, or sharing Kleenexes with his boy from the Wood, or whatever else he can think of to try and catch dat #GrindFlu.

So far, the guy appears to be showing symptoms.

Why am I turn up at five jig jig jig

About to start learning how to speak French

And I'll let everyone guess what this means:

I think we have a new nickname for Sam Montgomery.

Did I Mention DeAndre Hopkins Is All That Was Advertised?

Of course the DeAndre Hopkins update from his mini camp go even more impressive when he hauled in the catch of the day. While running a 9 route, Case Keenum put up the ball for Hopkins to work, and he did just that. With a defender draped on him 30 yards down field, he took to a slide on his back side that resulted in a one-handed catch with his left hand. Hopkins has made these types of catches the entire mini-camp and he maybe dropped two passes. Needless to say he will help this offense from day one.

Don't Get Too Comfortable, Case.

How is it that Case Keenum can seem old to me?

For the past two days, Keenum has returned to being a veteran leader at practice. He's helped rookie quarterback Collin Klein and given tips to rookie receiver DeAndre Hopkins.

"Little bit different out here," Keenum said. "... It's a position I'm pretty used to and I like. Being the guy. It's good."

Wouldn't get too comfortable, Case.

The man fighting to take Keenum's job should also refrain from getting too comfortable, because as it stands, he is unemployed.

Collin Klein came into the Texans' rookie camp so low on the totem pole, he wasn't even an undrafted free agent. He was on a straight-up tryout. And he apparently played pretty well on Sunday, having shown massive improvement in the words of Gary Kubiak. (Kubiak was full of battlefighting type praise for Klein, which is to be expected for a player of his style who succeeded in college through will power and pure toughness.) And yet, Klein boarded a flight on Sunday without a contract.

Klein did seem to indicate that perhaps the team left the door open for signing him down the road, telling FOX 26, "I think they're working through some things."

Which is another reason why Case Keenum shouldn't get too comfortable.

But ... what about Keshawn? He's so good at those.

An NFL Rookie Learns About The Fluid Meaning Of The Word "Cousin."

Real talk with new Rams wide receiver Tavon Austin, when asked about the biggest adjustment to life in the NFL:

"Just people," Austin said. "Everybody expects a lot of things from you as far as money. Everybody wants to be around you. My phone doesn't stop ringing now. It feels like they're counting my bank account now. So that's probably the hardest thing for me right now, just people.

"I've got a lot of cousins now. The whole (city of) Baltimore is my cousin now. We're going to just try to keep focused and let my mother and all of them handle it."

Come on, we've all seen "The Wire." We know nothing can unite West and East Baltimore.

Abraham to Tennessee? It's All About The Money

Titus Young. Someone Get This Man To A Hospital.

Titus Young is clearly mentally ill, and needs to get help. Like, now. I don't even laugh at these arrest stories anymore. And you know something is just sad when I won't laugh at a story involving pro athletes, multiple arrests, and climbing over fences to steal back cars impounded by the police.

Is It Political To Mention That The NFL Is Increasing Healthcare Costs For All Of Us?

Note to all NFL players: the league doesn't care about your long-term wellbeing. Nor do the teams you play for. And insurance companies especially don't care. If you suffer from long term injuries suffered while playing, you better have something stored away, because you may one day be on the hook for the surgery that is going to save your leg from amputation. Just ask former Bengals linebacker Reggie Williams.

But don't worry. Roger Goodell only makes $283 million a year.

Russell Wilson was the reason Matt Flynn didn't see the field in Seattle last season, and according to Steve Corkran of The Oakland Tribune, it may end up being Tyler Wilson that takes Flynn's starting quarterback job in Oakland this year. That's right, fourth round draft pick Tyler Wilson, the love of bigfatdrunk's world. It's still early, but it seems like it may be happening again, Matt. Tyler hasn't even put on pads yet, but he's drawing rave reviews from your coach and the media for his arm strength and accuracy. This is how it begins.

If it continues, you best just stay away from Phish Tour. Trey Anastasio is trying to ensure that the experience will haunt your dreams.

Anyone who likes Joan Jett will probably not get that reference.

San Diego Chargers head coach told Peter King that Manti Te'o is going to be an every down linebacker in training camp, starting as the Mike in the 3-4.

Headbands in America? Can't Do It, Mark.

Mark Sanchez is clearly a confident guy, going out in public in the United States wearing a headband that everyone knows you can only pull off in Europe. And once he reads this quote from a recent interview with his star wide receiver Santonio Holmes, his self esteem will only grow:

"Right now, it's Sanchez and that's who we're going with and we're going to continue on this road until time permits."