Who's next on the carousel? Did Andre Johnson undergo the knife? What about Arian Foster? Also, a law firm that employs a man named David Carr is representing Mario Williams' ex-fiancée in the diamond ring suit. And I literally caught dat #GrindFlu yesterday.

Who's Next on the Carousel of Mysterious Offseason Surgeries?

Derek Newton. Ed Reed. Apparently, Wade Smith. And now, Brooks Reed, too. These mysterious surgeries conducted under the fog of the offseason are really starting to pile up.

Let's not even bring up the topic of Darryl Sharpton, who has still not been cleared by team doctors to participate in offseason workouts. Nor will we discuss Brian Cushing, who is still rehabbing his surgically repaired left knee. Nor will we discuss the fact that two of thee last three players I just mentioned play inside linebacker, and that the third was rumored to be on the verge of moving to the inside. Houston's depth chart at that position is beginning to resemble a kiddie pool.

Wade Phillips revealed the news about B. Reed during an appearance on 610 AM last Thursday, and judging by the context, he probably didn't mean to do it:

"I'm concerned like I am with anybody that's coming off an injury, is coming off an operation," Phillips said. "I believe in our people and they say, hey, he's going to be fine, (Brian) Cushing's going to be fine. Even Brooks Reed had an injury last year and was operated (on) in the offseason. You're always concerned about it. I don't want to blow it up to say I don't think they will be back because I think they will."

I have two questions:

1) Is it serious? Torn groins are no joke. Reed missed four games late in the season last year because of his.

2) Why is the Houston Chronicle only just now reporting this if it was said on Thursday?

No, seriously. This fascinates me. I even went on 610's website to do a little investigating into how this could have occurred. The article they posted about Wade's interview doesn't mention Brooks Reed's surgery, which means you'd have to actually go and listen to the full audio to find mention of it. I presume. I'm not going to spend 11 minutes doing so to be sure. What that means, though, is that the Chronicle either has a slew of unpaid interns tasked with listening to five-day old radio interviews online in search of scoops, or someone at 610 texted someone at the Chronicle five days later and casually mentioned Reed's injury.

I'm going to start checking 610's web page before the Chronicle's from now on.

Covering The Stories That Matter

Already, this 610-over-Chronicle policy is paying off. Check out this gem of an article I just found from Sunday. It's about that ad that ran in ESPN The Magazine a few weeks back where Matt Schaub was promoting Charmin toilet paper, in which he complimented Chris Myers for doing "a good job of letting me know if something is up."

The headline reads, "What's All The Stink About Schaub's New Ad?"

The name of the woman who wrote the story is Deepi Sidhu.

While we're in poop pun mode, how about we change that to TP See-Doo-Doo?

I'll be here all night.

Case Keenum is apparently a badass.

"Keenum, he's a stud. He took us younger guys under his wing & showed us how the Texans do business." Rookie David Quessenberry #TexansRadio

Of the players who have been on ‘Texans Campus,' Case Keenum is the biggest revelation. He had utter command of the huddle. His passes were sharp. He made plays ‘off schedule.' He looked like a leader. What does it mean long term? Who knows? But he is clearly better and at least might make things very interesting for the back up competition.

Now, the search for the spot reserved for a C. Keenum in the Rice Stadium parking lot begins. 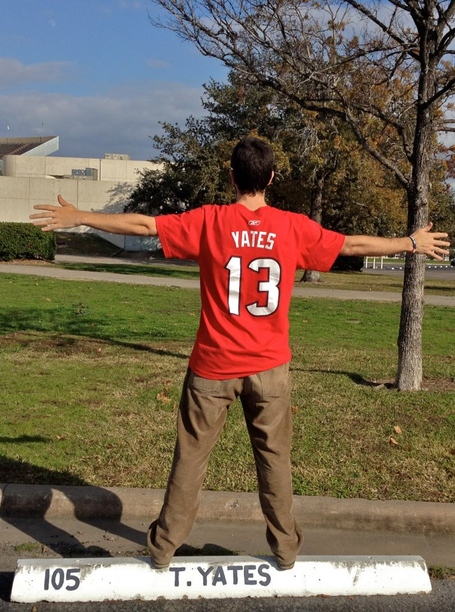 True story: I came across that spot about 10 minutes after purchasing this Yates shirt at Academy in advance of the first Bengals playoff game. It was a sign.

The Search For The Next Justin Forsett Begins

Most of you have heard that the Texans have invited former Colts running back Deji Karim (the one who ran it back against us in Indianapolis last season) to training camp. In case you missed it, four other rookie undrafted free agents got the call as well: Cierre Wood (Notre Dame), George Winn (Cincinnati), Dennis Johnson (Arkansas) and Ray Graham (Pittsburgh).

Titus Young Has Officially Had The Worst May Ever

It pains me to even read this latest Titus Young story. The former Detroit Lion is currently facing eight separate charges that could land him up to 7.5 years in California state prison, with two other cases still pending. As we all know, Young was arrested three times in less than a week this month.

His father says Titus has been taking an antipsychotic drug called Seroquel, and has gone to three different outpatient clinics seeking help for an unnamed medical condition. Just a few minutes of research makes it pretty clear that Titus Young is either bipolar or schizophrenic. As if the last year of his behavioral indicators weren't enough to allow you to surmise that.

"He's not rational," Richard Young said. "He's not really rational cause he's not really dealing with it. He's trying to compress it and he don't want to take his medication and stuff like that, but I think it could be a thing where he might even depressed sitting there."

How far he has fallen since one of the most amazing plays in college football history.

Rolando McClain Is Not Far Behind

The 23-year-old linebacker has retired from the NFL. I'm sure he'll land on his feet, though. Seems like a nice enough guy.

How Is Colt McCoy Not Showing A More Excited Reaction To This?

After all, is this not a miracle?

Credit to The Bob for emailing me the link to this this morning. No idea how late I am to this party. Might be Chron-style late.

Charles Woodson is expected to visit the Broncos soon, possibly even this week. And there is a rumor that Brian Urlacher may end up joining him in Denver, too, especially as the other team the former Bears linebacker had reportedly been leaning towards joining is not interested at this time.

I'm sure Broncos fans are all like, "We already have a safety we trust a lot."

And if the Vikings don't want Urlacher, it's hard to envision him ending up in Denver.

Jacoby Jones: All I Do Is Win, Once Houston Lets Me Go

Ever since Jacoby Jones was cast out of Houston, he has done nothing but win.

Jones and his partner Karina Smirnoff got a perfect score in his "Dancing With The Stars" performance Tuesday night, advancing to the finals.

Which I'm sure Corzo already has his DVR programmed to record.

Cruizing To A New Contract In New York?

The New York Post reported Tuesday that negotiations over a contract extension between the New York Giants and wide receiver Victor Cruz are now on "the two yard line."

Cruz has been rather quiet throughout the process, but he did give the Post an interview Tuesday in which he expressed his desire to retire as a Giant.

When asked if he thought a deal with the Giants is close, Cruz said, "I'd rather not answer any type of questions now but it's moving.''

Is he cautiously optimistic?

How has Cruz not been invited to join "Dancing With The Stars" yet, by the way?

Anytime You Use The Word 'Charlatan,' You Gotta Make Sure You're Using It Right

You may remember that Buffalo Bills defensive end Mario Williams is suing his ex-fiancée Erin Marzouki in an attempt to recover the 10.04-carat diamond ring he gave her in February 2012. That token of his love cost a reported $785,000. Williams claims that Marzouki broke off the engagement, which is why he wants the ring back. In the suit, his attorneys essentially labeled Marzouki as a gold digger who had "absconded with" a $785,000 diamond ring.

On Monday, Marzouki fired back, filing a countersuit in a Harris County courtroom. In the suit, she claims that Mario is the one that broke up with her, five times in fact. The first time was on the second day of a trip the couple and family members took to The Bahamas to celebrate their engagement. Mario got upset about something, broke it off, and chartered a flight home. She offered to give the ring back; the couple later reconciled. This happened three more times, presumably without the chartered flights ordered in anger. But on the fifth time, she refused to take him back, and refused to give the ring back as well. Marzouki claims to have 200 "pages" of text messages proving that Williams had on several occasions told her she could keep it.

Where it really gets fun is when we research whom she hired as a lawyer.

Tony Buzbee, most famous for his work as a personal injury attorney, and proud owner of JustWin.com.

He is also extremely patriotic.

Tony Buzbee isn't afraid to let you know what he thinks. And Mario, he thinks you're stupid:

"(Williams) is a victim of his emotions and of bad legal advice. What he's done is kick an anthill, and you know what happens when you kick an anthill."

You do not want a colony of Tony Buzbees pouring out of that hole.

The best part of Tony Buzbee's law firm is that it employs this man: David Carr, Mass Tort Administrator. So many places I could take that joke, and I hope to see my loyal readers do so in the comments section.

The best thing about Tony Buzbee's reaction to Mario Williams' allegations against his client, meanwhile, is that he used the word "charlatan."

As in, Mario Williams' attorneys are trying to portray Marzouki as a "charlatan gold digger."

I always associated charlatans with black magic and evil wizards until I looked it up this morning. Turns out that wasn't exactly what it means:

But I'm not a high profile lawyer trying to publicly smear Mario Williams' reputation. If I was, I would make sure I understood what "charlatan" meant. The guy sitting next to me at this coffee shop just suggested that perhaps the lawyer meant to say "harlot," which would be much more fitting for that context.

But who am I to question Tony Buzbee's methods? The guy is a winner. If he needs to use the word "charlatan" to win, then charlatan it is. Just win. Dot com.

I Really Am Sick With Dat #GrindFlu

I don't work out. Pretty much ever. And so, you can imagine my body's angry reaction to this sudden decision to get lean. I woke up Tuesday morning feeling nauseous and generally crappy. I will spare you the details, except to say that only by my rapid side-somersault off of the bed was I able to ensure that my girlfriend's sheets remained, as Khaleesi would say, "Dovagarys!"

That may or may not be how you spell "unsullied" in High Valyrian.

I later threw up my breakfast. I then called in sick to work. I then developed a fever, got in bed, watched about five episodes of Season 6 of "The Office," and did nothing the rest of the day, until the NyQuil finally knocked me out during the second half of the Spurs-Warriors game.

All the while, I was fending off accusations that I had become the first person in history to literally catch dat #GrindFlu. 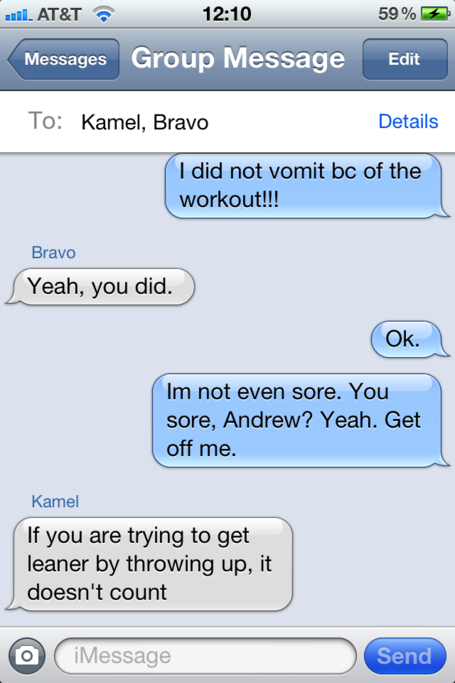 D.J. Swearinger, just know that you are the one that inspired me to get #LeanIn13 to begin with. You're so contagious, I caught dat #GrindFlu just by following you on Twitter and Instagram.