Where does Schaub rank in richest athletes right now, Favre returns to Green Bay in this edition of the newswire.

Griffin to Take Flight in Houston.
Texans director of college scouting, Mike Maccagnan, sat down with HoustonTexans.com to talk about the Texans' sixth round pick - Ryan Griffin. Long story short, Maccagnan gave a glowing review of Griffin while, at the same time, saying he had room to improve.

Coach Kubiak Stands Up to Crime.
The Texans coach was one of the headline attendees for the annual Crime Stoppers of Houston luncheon. Kubiak spoke about the necessity for the Texans staying involved in the community and the role of Crime Stoppers.

What's Next for Watt?
Paul Kuharsky raised the question can J.J. Watt be better in 2013? A combination of video game like stats and the changing face of the AFC South will make the task even harder for Watt in 2013.

The relationship between the Packers and Brett Favre may have finally thawed. Packers CEO Mark Murphy was recently quoted as saying that "[w]e want to have (Favre) back in the family". Personally, this will close a chapter for me as a long time Favre fan. The Oilers were gone, and my grandfather lives in Green Bay. I naturally gravitated to the Packers, while waiting for football to return to the Bayou City. I can honestly say I didn't watch a second of Favre as a Jet or Viking. I couldn't bring myself to watch. It was as if Biggio or Bagwell were playing for the Cardinals. (Or Berkman, oh wait - that happened. Damn Astros.) Favre back in Green Bay will set the world back on its axis. At least my world.

Alabama product and current Eagles guard, Evan Mathis, post a picture on Instagram of him "peeing" on an IRS building sign. That's something, all right. Wonder if this helps him not get audited? My guess is no. 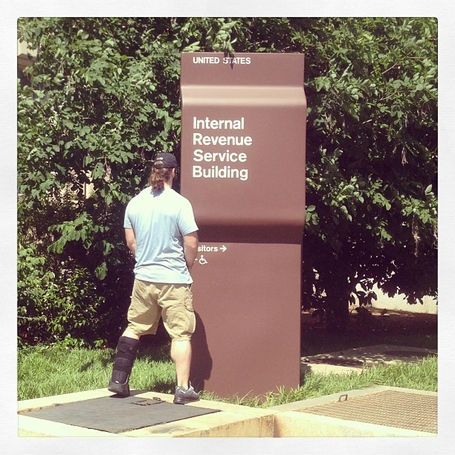 The Chad Johnson of corners is at it again. Richard Sherman hired the referee that signaled touchdown after the "Fail-Mary". Lance Easley was not officiating football this time, but a charity softball game run by Sherman. Sherman has reached new heights in trolling the Packers and NFL in general. I look forward to Andre Johnson and Sherman battling it out in Week Four.

Raiders Take It to the Cribbs.

Josh Cribbs, the long time face of the Browns, is now a Raider. Cribbs will be joining Denarius Moore and Jacoby Ford in the Oakland receiving corps. Cribbs will fit right in; all of them should be killing someone's fantasy roster or on IR by Week 3.