Apparently, Ed Reed's hip injury wasn't the sort of thing a doctor can find in a physical. So kudos to him for taking us to the cleaners.

This Still Isn't Getting Old

J.J. Watt being the Nicest Football Player Ever.

The search for a discernible flaw continues.

The Texans finished their five-week offseason conditioning program on Thursday. OTAs start Monday. There will be ten practices in all, running from May 20-June 6.

Here are a few things to watch for from State of the Texans.

Mike Florio joined In The Loop with Nick and Lopez on 610 AM to talk about how Ed Reed knew he was pulling a fast one on the Texans with his hip injury. Apparently a torn labrum is not something that can be detected in a physical.

Pro Football Talk has been doing this for teams across the league. Apparently, the Oilers belong to the good people of Nashville. We get the Texans, and the Texans only. Which is fine, I guess, as I don't think Cliff Parsley would have made the cut anyway. Texans fans can make their nominations now.

Andre Johnson is the clear number one.

I'm going with J.J. Watt, Arian Foster, and as much as I hate to say it, DeMarcus Faggins.

Gronkowski Headed For Surgery Yet Again

It appears New England Patriots tight end Rob Gronkowski is about to have a case of the Monday's.

Lingering post-surgery infections seem to be very hip among offensive starters in New England. Unfortunately, so is returning from them and later laying waste to the Texans.

The plan for Gronkowski is to insert a new plate into his left arm and get him back on track to be ready for Week 1. Unnamed sources are putting the word out across the media that there are currently no signs of infection. Any indication that it has returned, however, will likely lead to a fifth surgery.

Which will hopefully not inhibit him from doing more of this.

Dallas Cowboys right tackle Doug Free has restructured his contract in order to stay with the team. That means a pretty big pay cut, and abdication of the title "highest paid right tackle in the NFL." Free was originally scheduled to make $15 million in base salary over the next two seasons, with $7 million of that coming in 2013, and $8 million the next year. Now, he'll make less than half of that.

From an original cap hit of $10.02 million for 2013, the new deal reportedly frees up about $3.5 million in cap space for Dallas this year. ESPN Dallas reports will likely be used in extension talks with linebacker Sean Lee.

DeSean Jackson In The Backfield?

Reading this LeSean McCoy quote almost makes me wish I was an Eagles fan:

"There might be plays where DeSean [Jackson] is in the backfield, you never know," running back LeSean McCoy said. "I mean every time we come out here it's always something different. It's always a surprise. So you don't know what to look forward to."

So much fun. So many prefix-Seans.

The recently retired Rolando McClain issued a statement Thursday to explain his decision to walk away from the game at age 23. It was pretty boring. Stuff about getting his personal life together.

If he stays out of prison, McClain will be back in the NFL one day.

Apparently, Native Americans in Virginia are totally fine with the name of their local NFL team. A May 15 report by the Richmond Times-Dispatch says it is so. A journalist for the newspaper interviewed the following people as proof:

I'm not going to spend time researching whether just how representative this cross-section of Virginia's Indian population is, though I suspect academics would probably not sign off on the thoroughness of the Times-Dispatch's investigation. Let's focus more on the names of the chiefs.

Someone should at least have "Nighthorse" as a middle name or something.

Deep In The Heart of Redskins Country

I'm headed to my little sister's graduation from Virginia today. Flying into D.C. is always the cheapest option when you go to Charlottesville. This is what is in the fridge of my buddy's apartment. He is the only Texans fan around, now that the Bush people have all been cycled out. 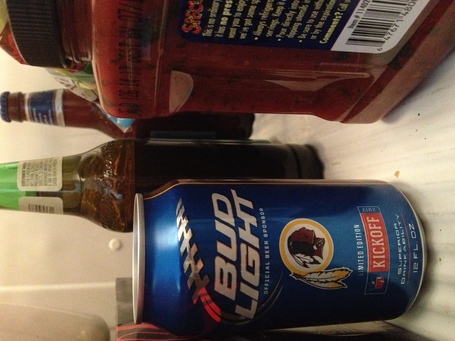 And I don't know why that came out sideways, but my sister is really pissed at me right now for not being ready to go. Later, D.C.