Organized team activities begin today for the Texans, the first opportunity for rookies and veterans to get the helmets on and mix it up on the field together. If you want to know more, there's always Google. Also, Stephen Colbert, Wahoowa.

Share All sharing options for: Battle Red Newswire: OMG It's Time For OTAs

Today Is The Day For OTAs

Texans offseason organized team activities (OTAs) start today at the Methodist Training Center. It is the first of 10 such practices. For the reader who e-mailed me the other day in lieu of simply doing this, those dates are:

Mandatory mini-camp is after that, from June 11-13.

And D.J. Swearinger is like a kid on his first day of Little League. 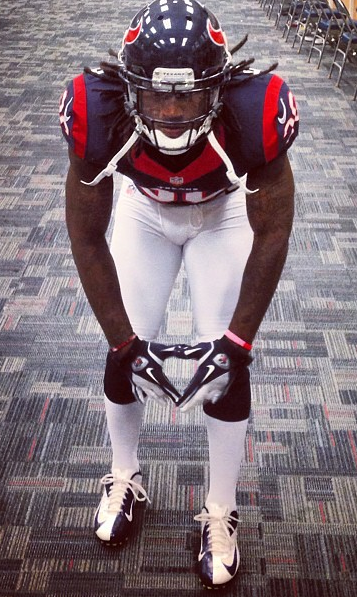 Everyone knows the Texans are dealing with some injury problems heading into OTAs. It should make everyone feel better to know that my cousin Will once dealt with the exact same hip injury Ed Reed has, only he was playing high school lacrosse, not professional football. The "only thing" Will couldn't do, he told me this weekend, was "drop-step." He then showed me what he meant by performing the first step that all NFL defensive backs get paid to do on an elite level, every time they drop back into coverage.

My cousin added that the rehab was much harder than he had anticipated. This eventually caused him to "stop caring about lacrosse."

Here's to hoping that Ed Reed is just a little bit tougher than Will, who would probably be starting in the Syracuse midfield during the Final Four this weekend had he just grown some balls.

Brooks Reed, meanwhile, says he's been running and lifting weights hard for the past three weeks, putting to bed the worries that his offseason groin surgery would leave him less than 100 percent for offseason workouts.

He also thinks that depending on how well Houston's two new rookie outside linebackers perform in camp, the plan will be for him to move inside for first and second downs.

Tom Brady tells Peter King that as he rounds the corner towards his 36th birthday, he's "never felt better throwing the football."

We don't play New England this year, do we?

Former St. Louis Rams third round draft pick Eric Crouch flamed out in the NFL before his career ever got started. Now, at age 34, he says he now regrets how he approached his rookie season, when he quit just as the regular season was about the start.

The read-option was still over a decade away from catching on in the NFL back in 2002. No one wanted Crouch under center. His agent knew that, and so he convinced his client to be open to playing receiver as a way of getting his foot in the door. Among Crouch's regrets is "misling" the NFL teams who interviewed him in the pre-draft process on this subject. He says he knew all along in his heart that he didn't have the passion to play anything but quarterback.

Because catching passes was never fun at Nebraska.

Crouch, like all retired athletes with star appeal and the slightest bit of eloquence to their speech, will be just fine. He spoke about his experiences in St. Louis while taking part in NFL's Sports Journalism and Communication Boot Camp at Bowling Green State University last week.

Also in attendance at Bowling Green last week was Minnesota Vikings linebacker Erin Henderson, who seems to have developed a greater appreciation for the media as a result.

"That stuff does put a little bit of stress on you all, doesn't it?" Henderson asked. "There's no time and you still have to turn your work in. That's tough. Maybe I'll be nicer to you guys in the future."

As more and more Americans become aware of the long term health effects of playing professional football, it's a good thing there's a wide world out there stock full of potential recruits to play the game in the coming decades. FOX Sports' Alex Marvez takes a look at the growing trend of foreign-born players entering the NFL.

Ready To Actually McAdoo Something On The Field

Baltimore Ravens outside linebacker Michael McAdoo says it's "go time." He has been in the NFL for two years, and has yet to play in a game, having spent 100 percent of that time on injured reserve. What's more, he was suspended for his entire final season at North Carolina, back when T.J. Yates was just slaying Chapel Hill chicks.

McAdoo signed with Baltimore after the 2011 supplemental draft, only 20 years old at the time. The guy is a 6'7" pass rusher. John Harbaugh is high on him as a project player, and now the former Tar Heel will have an opportunity to see what he can do as the Ravens enter OTAs. There is a deep pool of outside linebackers competing for jobs: Terrell Suggs and Elvis Dumervil, along with Courtney Upshaw, Albert McClellan, Pernell McPhee, Adrian Hamilton and rookie John Simon.

Apparently the Washington Redskins quarterback's fans have been buying up all the things on his wedding registry. And he's all for it.

I didn't ask the fans to buy me anything. They found it on their own and decided to get what they could. SMH at all these Debbie downers

As he should be. In merely accepting a gift from an anonymous northern Virginian, he's making that dude's day. Being able to say, "I bought RGIII a toaster" for the rest of your life? Yes, please.

"The Orioles Won't Change Their Schedule? That is so the opposite of ideal." - Joe Flacco

You may remember when Flacco said that a cold weather Super Bowl played outdoors in New York would be "bad."

Who, as expected, totally owned the Sally Hemmings references. He even tweeted this during the speech:

If you didn't just laugh at that, it's not because it wasn't funny. It's because you don't know enough about early 19th century American history.

Congratulations to Garland, by the way, on being the latest Parsley to graduate from Virginia with a degree in history and no intention of being a historian. That's now three in eight years.