OTA's continue, and DeAndre Hopkins continues to draw praise from veteran teammates. Brennan Williams, meanwhile, is not off to the best of starts. But it's about how you finish that matters. And for one South Austin Little League manager, seven years of futility has created doubts about his ability to lead young men.

OTA's: It's All About Conditioning

Everyone seems to really be getting in shape this offseason. 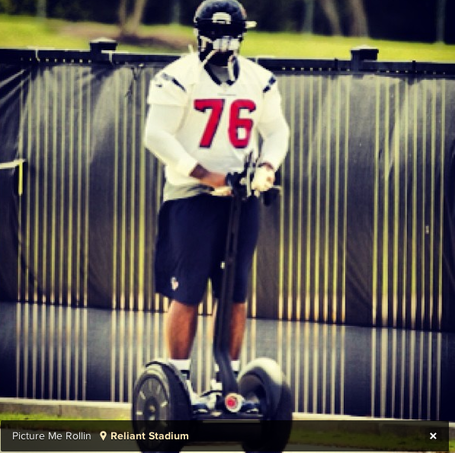 If you had hoped that third round pick Brennan Williams would be a potential replacement in Year 1 for right tackle Derek Newton, who underwent offseason surgery and who likes to tweet about when he takes and wakes up from naps, you probably will be disappointed by this quote:

"(Williams) is way behind. He's got a little issue with his knee. We're trying to get him healthy and we gotta get his physical condition up with the rest of the team."

That was Gary Kubiak's frank assessment of the rookie out of North Carolina, an anime freak whose idiosyncrasies have sadly gone largely unnoticed by the Texans faithful, so overshadowed they are by the #GrindFlu of D.J. Swearinger, the poop-throwing of DeAndre Hopkins or the Sonic the Hedgehog theme that pervades Sam Montgomery's being.

It's looking like the real value from the draft when it comes to offensive linemen is going to be David Quessenberry. Kubiak has only positive things to say about this guy:

"(He's) smart, played all over the place during minicamp and handled it. The guy's going to get a ton of reps at right tackle now with the (Derek) Newton and the (Brennan) Williams situation."

The Williams situation. That's never a good thing to hear if you just got drafted. Like the other very large right tackle with dreadlocks flowing out of his helmet, you are a "situation." And just in case this situation doesn't pan out, I want everyone to see right now the kind of stuff the former Tar Heel likes to post on Twitter.

Seriously. Watch that. Watch it 100 times. I will never understand the Japanese mentality.

Bryan Braman: "Wait, I'm Tired Of Being Only On Special Teams. Who Cares?"

Steph Stradley - who may be the coolest mom in Houston - brought to my attention that inside linebacker Tim Dobbins just didn't come to OTA's. Not because he's rehabbing from hip surgery, but because OTA's are voluntary.

Dobbins is one of two Texans under contract that didn't come. The other one is Ed Reed. And Ed Reed isn't competing for a starting job. Tim Dobbins is.

Kubiak didn't have much of substance to say about it, and indeed, he may be withholding some pertinent information that would create a sound excuse for Dobbins' absence.

"Yeah, it's voluntary. He's not here, but our work has been good. Of our 59 guys that were under contract for the offseason, 57 of those guys were here the whole time. Obviously, Ed (Reed) isn't healthy, but other than that, it's voluntary and Tim is not here."

The Texans tend to have 100% participation in OTAs. They are not one of those teams whose vets do their own thing. So missing OTAs for the Texans is just like when your boss asks you to do something. You say no at your own peril.

The silver lining on Dobbins' absence for pretty much all Texans fans is that it may give Bryan Braman an opportunity to start. From Kubiak's lips to your ears:

"Obviously, he's getting a chance to work with the starters right now. Usually when guys get put in those positions because of Brooks (Reed) moving or whatever, it' doesn't matter, but when guys get put in those situations, you'll see them flourish and take off. It's interesting to watch him right now. He was good yesterday and I'll go back and watch him today. Here's an opportunity to say, ‘Brian, can you start? Can you be a starter in this league?' So we're going to give him a chance throughout OTAs to see how far he can come."

Find me a man who doesn't like Bryan Braman and I will show you a liar.

Who Else Knows DeAndre Hopkins Is Going To Be All Over Sportscenter This Year?

"He's caught more balls with one hand than I have since I've been here."

That's what she said.

"You can tell he wants to be great. He doesn't have that ‘deer-in-the-headlights' look. He's ready to go and he works hard."

Hopkins threw out the first pitch last night. No video evidence of any kind showing how he stacked up against J.J. Watt, or The Bob, for that matter. But he did get a personalized white home jersey with his nickname on the back.

I would buy D.J. Swearinger's, whenever he gets to do this. Only because I want town the first ever Astros jersey that comes with a hash tag.

Harris Is Ok. The Offseason Is Boring.

One negative thing involving DeAndre Hopkins is that he accidentally delivered a swift knee to the head of third year defensive back Brandon Harris at OTA's on Tuesday. Hopkins walked away with a bruised knee, while Harris was a little more shaken up.

You can tell it's the offseason when this is even semi-news.

Not only is Roger Goodell planning to increase the number of games played in London to three per year, but he continues to be genuinely concerned with player safety. That's why he's still planning to eventually increase the length of the regular season to 18 games.

But don't worry, they'd remove two preseason games, which take just as much of a toll on players as regular season games.

But then they would add two playoff games.

But don't worry, because kickoffs will totally be eliminated one day.

And Goodell will see to it that players who get cut in the preseason will be dispatched with in a much more humane fashion in the future.

And one method of doing so will potentially be by funneling the castaways into the WWE. That has nothing to do with Goodell, but I could totally see Sam Montgomery doing this one day.

Also get ready for the Draft to be held in May from now on. Network sweeps month, baby. But no one in the NFL office will admit it.

Woodson Back To Oakland

Charles Woodson is going back to Oakland, where he will likely finish his career. His base salary is $1.8 million, with $2.5 in additional incentives, and a $700,000 signing bonus.

But his hip isn't messed up, so, yeah.

Is There Anyone Who Sees This And Doesn't Click On The Link? 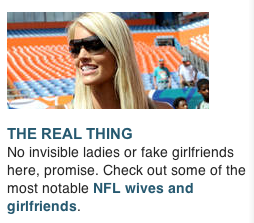 Doubtful. We all want to know what it's like to be really good at football.

Jacoby Jones Is Such A Loser

Third place on "Dancing With The Stars?" Suck it, Jacoby.

Please indulge me for a moment while I write way too much about a Little League baseball team on a blog about the Houston Texans. It's sort of therapeutic for me to just write it all out. And after what happened last night, I need this. If you don't want to read it, then don't. But don't pillory me in the comments for it. After all, this is a free speech issue, right? We all know how much our readers love free speech.

The kids that play for our merry band of childless, 29-year-old burnouts at South Austin Little League run from six to eight. Some show up to the first practice not knowing which hand to put the glove on. Most never learn which is right and which is left field, and the majority don't know how to tie their shoes in any reasonable amount of time. That doesn't mean they're not capable of producing some Instant Classic type performances.

There are only five teams in the Coach Pitch division, so making it to the Final Four without having to play in the play-in game is quite an accomplishment. And that is where we found ourselves last night: the third-seeded Astros going up against the second-seeded Blue Jays for a chance to ruin our own Memorial Day weekend plans by claiming a spot in the Saturday afternoon championship game.

Sidebar note: Who the hell schedules these things for Memorial Day weekend? That's why I volunteered to be Schedule Guy next season. This will not happen in 2014.

It was a miracle we even got a chance to play the last inning. The strict time limit rule says you cannot start a new inning after one hour. With the Blue Jays rallying in the bottom of the fourth, the main concern was not that they may expand their lead from one to three or four, but that in doing so, it would deal our season a slow, anticlimactic death blow, the kind of anti-drama that the stupid one-hour time limit makes possible. At least give us a chance to put on the rally caps. This is baseball. The clock shouldn't be the obsession of the coaches in the bottom of the fourth inning. But last night, it was, and my iPhone got pulled out of my pocket about 30 times over a ten-minute span. With three minutes left before the cutoff, we only had one out. At 0:59, we had two. And like a DNA test proving a prisoner's innocence as he is being strapped into the chair, our shot at redemption came in the form of a ground ball to the pitcher, with only seconds remaining. And like clockwork, our pitcher made the play.

It was 8-7 Blue Jays, the top of our order was due up, and our destiny was to win the game. Everyone knew it.

It's like D.J. Swearinger says: If you do not hunt, you will not eat.

The Blue Jays led off the bottom frame with a strikeout. And that is when the wheels came off for the Astros. There were a few ground balls through a few pairs of legs; there was a gust of wind that literally blew the hat off of our right fielders head as he was trying to get the throw into second base, which of course caused pandemonium in his brain. There was just stuff happening that happens in baseball games played by children who can't tie their shoes. Soon, the game was tied at 12.

Shortly thereafter, with two outs, it was 13-12. And just like that, it was all over. In a game that saw a total of 25 runs cross the plate, ten of them did so in that crazy, gut-wrenching fifth inning.

I admit it: I had to fight back tears after the game. Yes, I'm a grown man. Yes, I tell our players not to cry. But this is what sports are all about. This is why you play the game. I bet even Jimmy Dugan would have gotten the sniffles if he were in my shoes.

There's No Crying in Baseball (via klance1)

My friends are all stoked, though, because it means we get to all go to the river in Hunt, Texas a day early, as that Saturday championship game won't include the South Austin Astros. I could care less about their happiness, though. An extra day on the river doesn't even compare to the prospect of playing for a title, even if it is seven year olds we're talking about. But then again, get a few beers in me, and I'm sure I'll be just like Swearinger: in #HUNTMODE.

Next year is our year, though. Seriously.