Houston Texans Newswire: Is It the Shoes?

J.J. Watt gets his own shoe, Brian Urlacher retires, and NFL banking on new Xbox in this edition of the Newswire.

Share All sharing options for: Houston Texans Newswire: Is It the Shoes?

Is It The Shoes?

2012 NFL Defensive Player of the Year J.J. Watt has reached a new plateau as a NFL star: his own shoe. 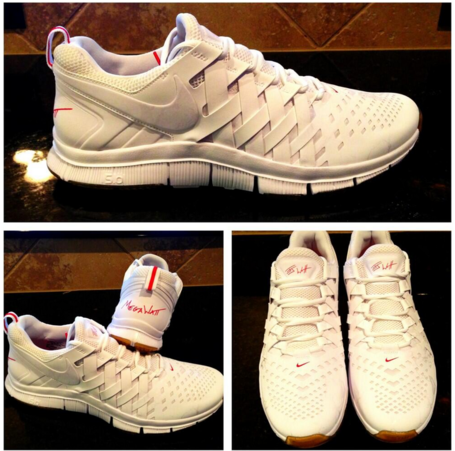 He joins the pantheon of players like Jordan, James, Durant, Griffey, and even Olajuwon. At the very least these should last longer then the Vince Young shoes. Finally, Nike, I think it's about time for a remake of this commercial with Watt.

J.J. For Man Of The Year

Watt, on his continuing quest to take over the hearts and minds of the people of Houston and the NFL in general, met with a special fan between Organized Team Activities. To steal a line from Bayless, I would like to meet the person that doesn't like J.J. Watt, and I'll show you a liar.

Jim Hoelker and Janice and Bob McNair held their ninth annual Impact a Hero Hall of Fame Gala Dinner. Impact a Hero provides "immediate and ongoing emotional and financial support for our severely-wounded post-9/11 combat veterans and their families." J.J. Watt, Matt Schaub, and Chris Myers were there to show their support for our nations veterans. Myers was also inducted into the organization's Hall of Fame for his work mentoring and providing tickets to veterans.

Soon after Super Bowl LI news, the future of the Astrodome can into question. All signs point to a teardown. As a life-long Houstonian, I can honestly say I have a ton of memories about the Dome. My first football game, Randy Johnson pitching as an Astro, division championships - the list can go on forever. The Astrodome needs closure; watching it rot away next to Reliant is painful and disrespectful to its memory.

Urlacher Out The Door

Brian Urlacher, after not finding work this season, has decided to retire. Heading into 2013, the NFL will be without Ray Lewis and Brian Urlacher. Frankly, I never knew the impact of Urlacher among fans:

Since 2007, only 1 defensive player has outsold Brian Urlacher in jersey sales: @tpolamalu (via @Fanatics)

At the very least, Urlacher can hang his hat on the fact that he is probably the most success person in America with a barbed wire tattoo.

Walking The Line Between Health And Money

Dan Diamond of Forbes took a look at the NFL's attempt to add two more regular series game (once again) and the possible repercussions on a player's health. Outside of the breakdown, one fact stood out: "The Houston Texans have reported a total of three (head injuries)" as compared to the Raiders, who reported 32. Are the Texans an example for the NFL or just not reporting all of their injuries? I would generally believe the former rather then the later.

The Giants have a two-time Super Bowl winning quarterback, but he may not have anyone to throw to by the start of the season. Victor Cruz is holding out after an offseason as a restricted free agent that saw him have no takers. Now, Hakeem Nicks is holding out of OTAs in hopes of improving upon his current rookie contract, wich has on year, $2.725 million remaining. Hicks, Cruz, and Eli Manning are a core any team would die for, but the Giants look to lowball as long as they can.

NFL Cashes In On New Xbox

Microsoft recently unveiled the Xbox One, and the NFL was a large part of the presentation. Live broadcast and fantasy football stats will be integrated into the interface of the Xbox One. As a deal worth a reported $400 million with the NFL, Microsoft will provide teams with surface tablets and get on-field branding. Translation, "NFL, PLEASE HELP US! We can't afford for the Surface to be come the next Zune."