When will football season start again? Seriously. I will never eat a snow cone at a baseball game again. Not that I ever have.

Congratulations to Sonic Sam Montgomery on getting money.

@profootballtalk Did he sign for a few of these?@sonic99_sc twitter.com/kollarj/status...

The Texans' roster lists only one kicker for 2013: Randy Bullock. Gary Kubiak says that some rookie named Andrew Shapiro is supposedly going to "push" Bullock in training camp, despite the fact that Shapiro was mainly a punter at Fresno State.

Mercilus Coming Into His Own.

Always good to hear when a player comes into Year 2 with more swag:

.(Kubiak on Whitney Mercilus) "First off, you can tell he's confident. Whitney has probably talked more in a day than he did all last year.

This will not be an issue for Jungle Boi at this time next year.

#Texans @manningup38 said the young DBs have swag. I asked if he was specifically talking about 36 (@jungleboi_swagg), he said, "Oh Yeah."

Getting Chased By A Murderer

This is the greatest autograph I have ever seen. Former Jacksonville tight end Pete Mitchell, my hat goes off to you.

Michael Crabtree is not expected to miss the entire season. Look at how he has chosen to announce this to the world. 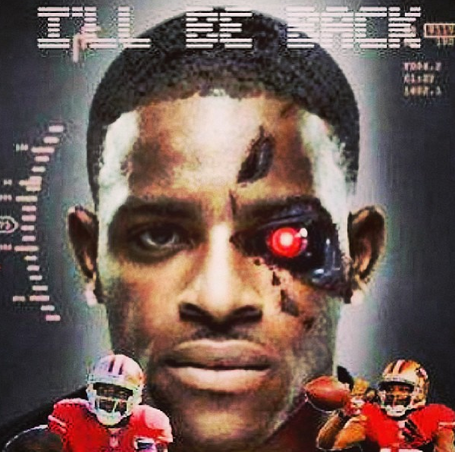 New Orleans Saints coach Sean Payton is the highest-paid coach in American sports. He makes $8 million a year, $500,000 more than the man tied for second on the list, Bill Belichick.

Belichick is tied with Andy Reid.

And Charlie Weis has received $10.8 million from Notre Dame since being fired. More is on the way for the fat man in Kansas, too.

Mike Vick Wants To Race All The Time Now.

Philadelphia Eagles quarterback Michael Vick has let his victory in the race against LeSean McCoy earlier this month go to his head, it seems. Vick said Thursday that he thinks he's faster than every other quarterback in the NFL when it comes to a 40-yard dash. That includes Colin Kaepernick and RGIII.

He's open to proving it if anyone else is down:

"If somebody wants to set something up, I'll be more than glad to accept the challenge."

Mathieu Pissing In Cups Full Time From Now On.

The Arizona Cardinals are going to make Tyrann Mathieu prove he's clean if he wants to get paid. Shortly after the team announced Thursday that the two sides had agreed to terms on a contract, NFL.com's Albert Breer reported the terms: four years, $3.052 million, with a signing bonus of $265,000. Some potential arrestors to him getting paid the full amount, however, come in the form of the ten drug tests a month that the Honey Badger is currently signed up for.

Former Denver Broncos center Tom Nalen is apparently a huge dick. He discussed in great detail on Thursday how he once intentionally tried to blow out an opponent's knees in retaliation for the guy grabbing his facemask. The play occurred in the waning moments of a 35-27 loss to San Diego in November 2006. The knees Nalen fail to blow up belonged to Chargers defensive lineman Igor Olshansky.

Here is what Nalen said when asked about the difference between being a dirty player and being tough:

"Probably penalties. You get called for it, right? No, I played clean football. I wasn't a cut blocker, I wasn't like those other four guys next to me. Those were the dirty ones. If you're cut-blocking at center, you're doing the wrong thing probably. So, I wouldn't consider myself a dirty player. ...

"If people would look at the play before that and realize why I did what I did -- and even on that play I missed the cut -- so you know definitely I wanted to blow his knee out on that play because of what happened the play before. But that, you know, is that dirty? I don't know. It's revenge, kind of, so."

Pittsburgh Steelers tight end Heath Miller says there's a "chance" he'll be back for Week 1 after tearing his ACL in Week 16 last year. Miller, the team MVP in 2012 and Matt Schaub's favorite target in college, also injured his MCL and PCL on the play.

Wonder When He Will Get Ray Lewis On The Other Thigh.

Everyone saw this tattoo, right? The one of O.J.'s mugshot. On the thigh of a Bills fan.

"I'm not going to risk my career to play in one game."

What he meant to say was:

"I'm not going to risk my career to play in one game for the second game in a row."

Griffin says his surgically repaired knee feels great, and that there is no lingering hostility between he and head coach Mike Shanahan. His goal is to be back on the field in full pads for training camp on July 25, so that he can make it back in time for Week 1. He spoke of being "smarter" on the field this year: limiting the big hits he takes, doing what he needs to do to avoid injury. Hopefully his coach is smarter as well.

New Oakland Raiders quarterback Matt Flynn has already been asked to restructure his contract to help the team increase cap space. The move saves Oakland about $1 million against the cap.

Oakland's dead money figure at the moment stands at something like the GDP of a small Central American nation.

Former Texans fullback James Casey will miss the rest of the Eagles' organized team activities (OTAs) after undergoing an arthroscopic procedure on his right knee earlier this week. Recovery time is expected to be only a few weeks.

Eight people posted this on my Facebook wall yesterday.

Astros vendor filmed with tray of snow cones on the BATHROOM floor.. and he's fired (via ChannelsNewz)

I wonder if he would have washed his hands had he not gotten busted.