If you're not putting a lip in before practice, you're not doing it right. Arian Foster, take note, and also keep an eye out for Ben Tate, who is in a contract year, knows it, acknowledges it, and sees opportunity in your calf injury. He also once called you "Adrian," allegedly.

Did Earl Campbell play for the Texans? No. Do 99 percent of Texans fans love Earl Campbell? I would say yes. Maybe only 98 percent. But it's most of us.

Thanks to CBS Sports' Josh Katzowitz for letting the world know today that this commercial existed:

And this one, too:

Earl Campbell for Skoal (via koltman17)

Putting a lip in before an NFL practice? Sure, sounds like a great idea.

From now on, all of my readers will be known as my "Skoal Brothers."

We now know with certainty what we've all pretty much assumed since news broke of Ed Reed's janky hip: he won't be around the team in any capacity until the mandatory three-day minicamp that begins June 11. This will cause a major sad face for the Jungle Boi himself, D.J. Swearinger, a self-professed idolater when it comes to Reed, one of the few teammates with whom he said he has not yet been able to chat.

Let's all hope that Reed's superior football intellect will allow him to imbibe the intricacies of Wade's defensive scheme like Will Hunting reading a textbook about the evolution of the market economy in the Southern colonies.

Reed is in Atlanta right now, continuing to rehab his hip after undergoing surgery for a torn labrum. He'll be heading to Washington, D.C. next week for a reunion with his former Baltimore Ravens teammates, slapping palms with Barry O. and catching up with another one of Swearinger's childhood idols, Ray Lewis.

I can just picture the scene:

Ray Lewis: "So you chillin' in the ATL right now, right? I know you ain't been to Houston yet. I read that Battle Red Blog, you know. Sometimes I forget you even on the Texans!"

Ed Reed: "Nah man, it ain't like that. It's #BattleReed all day these days. But yeah, I never told nobody about my hip ‘til after I signed. And the doctor sure didn't find nothin'."

Reed: "Nah, man. The last time I asked, you said something about ‘statute of limitations.'"

Lewis: "Oh yeah. Maybe I best hold off on that story ‘til I check with my lawyer."

Takes One To Know One

You can just taste the empathy coming out of Gary Kubiak's mouth when he talks about his backup quarterback, T.J. Yates:

"T.J.'s career has been interesting because it was like, ‘Boom!' - so many great things happened (at the end of his rookie year) and his confidence was sky-high," Kubiak said. "Then you come back your second year and play the preseason but not play but about 20 snaps in the regular season, and it seemed like nothing went right in those 20 snaps. That's part of being a backup quarterback."

Seems like an excellent time to bring back this classic inspirational video:

Why not TJ Yates? (via MrSkillability)

It was a lot more inspirational before those three picks at Baltimore.

Alan. Don't Look. But Coach, Kubes, Is, Totally, Checking, You, Out.

I really just like this CSN headline about sixth-round draft pick Alan Bonner:

Except for the fact that Lestar Jean is apparently making a case for why he deserves a spot more than the new kid.

@hammerstexans Jean has been more consistent and looked good this week. Bonner still has work to do but he makes see why they drafted him.

Cornerback Brandon Harris was back on the field Wednesday for the first time since his run in with DeAndre Hopkins' knee last week.

Also, CSN's Dave Zangaro has noticed that Lestar Jean always wears pants during OTAs, no matter how hot it is outside. This is exactly how it is with almost everyone I have ever met in Africa, the Balkans, Latin America and the Middle East. (Europeans, too, but at least their men can confidently rock the Capris, along with the Sanchez-style headbands.) This has never made sense to me, and now I view Lestar as someone who doesn't make sense to me.

I hope this bullet helps dispel all those "this guy's writing sounds like a teenie bopper's diary" notions that have been circulating in the comments as of late. That is, like, so annoying, ya know?

Your Daily Dose of Motivation From My Two Favorite Members Of The Texans' D.

First, J.J. Watt, from a one-on-one with #coolmom Steph Stradley:

There's nobody out there but you to do it, so you need to look yourself in the mirror and ask yourself what you want to accomplish. Then just go out there an do it."

And you know my boy Swag is always trying to pick me up and remind me who is the real king of the jungle: 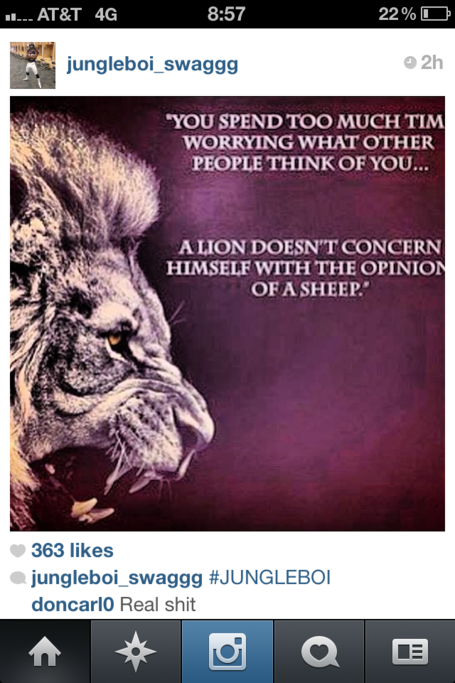 Your Honest Answer Of The Day Belongs To Ben Tate.

Refreshing to see players actually acknowledge the importance of a contract year:

No need to try and sugarcoat it with, "Every year's a big year, though."

This obviously reminded me of how Tate responded after Foster signed his huge contract before last season:

"I'm going to keep riding the wave, working hard every single day to get better," Tate said according to Robertson. "I feel like I'm one of the better running backs in the league right now, definitely (in the) top 10. Adrian's getting paid the big bucks, but you know what? My time is coming. ...

"I like Arian," Tate continued. "We get along. Why should I be jealous of him for doing well? I've always been taught not to be a hater. Why should I hate on Arian for doing what he was supposed to do when he got a chance? I got hurt. He had the whole year to make big things happen. He took advantage of his big opportunity. When I get my opportunity, I've got to do the same thing."

I really hope he didn't actually say "Adrian," as he was quoted as saying.

We feel you, Ben. Arian Foster's calf feels you, too. Don't mess it up.

Remember The Other Simms Son?

Everyone from Texas remembers that time NFL Hall of Fame quarterback Phil Simms had a son who was also destined to be an NFL star quarterback.

That didn't really work out.

Phil Simms has another son, though, who also plays quarterback. His name is Matt, and he briefly started at Tennessee in 2010. Desmond Howard tweeted during that season that Simms was one of the worst quarterbacks in the SEC. That caused Phil to try to fight him. This was pretty much the last we heard of Matt Simms, until now.

If you're Greg McElroy, you've got to be thinking to yourself, "Damn, Tim Tebow must really suck if even I started over him last year, and I am about to lose my third string spot to Matt Freaking Simms."

I mean, the guy doesn't even have his photo uploaded on his NFL.com player bio page. Can't lose your job to that guy.

E.J. Not Being Handed Anything In Buffalo.

E.J. Manuel has already informed the world of how smart he is, declaring that the Buffalo Bills' playbook is simpler than what he had to learn as a quarterback at Florida State. He is still third on the depth chart, despite being the only QB taken in the first round.

No knock against Florida State, but this must simply mean that Kevin Kolb is a member of Mensa, and Tarvaris Jackson DVR's Jeopardy! every day.

That's what happens when you play in the NFL and get arrested for public urination.

If you read what happened, you see how fortunate Moffitt - described in the police report as one of two "very large males" running away from the scene - is to have not been charged with evading arrest. I just want to know why this Seattle Seahawks guard had been banned from "all Kemper Freeman properties" to begin with. That seems like something the Seattle Post Intelligencer reporters should have dug into and explained to the curious readers at home.

This happened in June. The best part is that Moffitt got arrested again two months later for trespassing on another Kemper Freeman property, and that, as a "very large male," it took two sets of handcuffs to contain him:

Having a hard time painting a mental picture of what this looks like. Did they cuff one set to the other?

Thank God they were all double locked.

Excellent off-season, Seattle. You don't see any news involving urine and Matt Schaub's Texans, no matter what the context.

Gronk Ready For Yet Another Surgery.

How much do you love Aaron Hernandez right now if you're a New England Patriots fan? Your star tight end Rob Gronkowski finally gets his broken forearm ready to heal when the news drops that the rumors were true: Gronk is headed for back surgery this June.

No matter how mild the Patriots, the media or Drew Rosenhaus try to make something like this sound, back surgery of any kind is something I automatically label as serious.

If you're a Patriots fan, it may be time to start thinking about a future that involves a lot of former New York Giants tight end Jake Ballard as well. He spent the entire 2012 season on New England's injured reserve, learning the playbook and rehabbing his knee. Could be his time.

Props To My Boy Zim On His 3-HR Day

The guy who lived two doors down from me in my freshman dorm at Virginia hit three home runs in his first three at bats yesterday.

Finally, I get to brag on Zim, instead of the other way around. It really gets old seeing him talking to the media about how he knows that really awesome writer for Battle Red Blog.