Houston Texans Newswire: "I Just Saw You Slap Your Attorney On The, On, On The Backside."

What more could you ask for than this Chad Johnson courtroom appearance on video? The man blew an already agreed-upon plea deal by slapping his attorney's butt while the judge was talking.

Share All sharing options for: Houston Texans Newswire: "I Just Saw You Slap Your Attorney On The, On, On The Backside."

The Houston Texans begin their three-day minicamp today, and it's mandatory this time.

Please, no one use the house thing to defend him today. That's just what Antonio Smith said about the situation; it didn't come from Dobbins, or his agent for that matter.

Kubiak, Like Rest Of People In City Of Houston, Worried About RT.

As he should be. The top two candidates for the starting job - third-year player Derek Newton and third-round pick Brennan Williams - have combined to miss all but one practice of organized team activities (OTAs) this offseason. Kubiak told CSN Houston Monday that both would be back in time for training camp:

Enough Of The Texans. Let's Move On To The Chad Johnson Attorney Butt Slap Video Around the NFL

Do Not Mess With This Blind Female Judge. 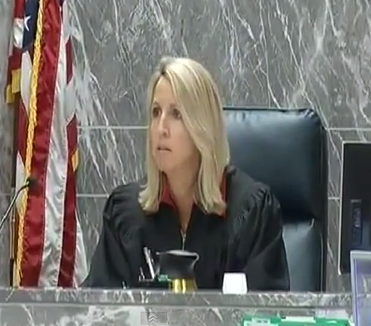 Her name is Katie McHugh, and she is not here to play. For the purposes of contrast, I will refer to her as simply the female judge from here on out. Now watch below.

Chad Ochocinco Johnson Gets 30 days In Jail For Slapping His Lawyer's Butt In Court! (via WorIdMedia)

The butt slap - more of a tap, really - comes early, but the real gold is at the end, when the entire scene morphs into something you'd see in a fifth grade classroom. Only, the detention (or "penance hall," as we called the dreaded 30-minute stay in Purgatory during lunch breaks at Strake Jesuit) lasts 30 days, and instead of Coach Kenny or Coach Banas monitoring you from behind the desk, you've got guards who know nothing of Herman Hollerith or the art of the perfect protein shake, ready to take your shoelaces and put you on lockdown.

For people who either cannot or will not watch the Chad Johnson Attorney Butt Slap Video for themselves, here is a brief play-by-play of how the man who briefly changed his last name to Ochocinco was able to get himself thrown in jail when he was less than 85 seconds away from walking out of court a free man:

1) Female judge congratulates Johnson on having "an excellent attorney who did a great job" for him. (Unclear whether this was a sarcastic, bitter comment, or a sincere compliment to the attorney.)

2) Clearly in agreement with the female judge, Johnson gives attorney a quick butt slap while judge is talking at the 0:09 mark.

4) Female judge loses it: "Mr. Johnson, I don't know that you're taking this whole thing seriously. I just saw you slap your attorney on the, on, on the backside."

Clearly did not know which word to go with there.

5) Awkward, two-second silence in the courtroom. Feels like 15 seconds.

6) Female judge continues: "Is something funny about what's going on here today?"

7) Johnson's attorney begins to stammer some sort of justification for what just transpired - which, by the way, had happened previously in the same presiding judge's courtroom - but the female judge cuts him off: "The whole courtroom was laughing."

8) Female judge then repeats herself, multiple times, about how the entire courtroom had been laughing.

(Sub-subtext in her mind: at me, just like when we were kids.)

Within about one minute of the butt tap, the female judge has thrown down in disgust a piece of paper. This presumably contained the text of the now voided plea agreement, which, the judge says, is now off the table.

And thanks to Deadspin, we now know something that just makes this story special: the female judge described herself as "legally blind" during her campaign.

Not in the figurative sense, guys. The judge who gave Chad Johnson 30 days in prison because she "saw" him do something also describes herself as legally blind.

It's a cruel world we're living in.

Unfortunately for Adam "Pacman" Jones, this spinoff of the old Rasheed Wallace adage is as true as the original claim. Here is the video of his latest kerfuffle.

It's not nearly as good as the Chad Johnson stuff, though equally as sad in terms of what it means for the direction in which Jones is heading.

Let's be real, though. We all want to know one thing: was that guy smoking a cig and running game on that girl in the foreground able to make any headway?

Guy: "Man, that was crazy when that guy punched that girl in the face."

Guy: (nervously reaches for another cigarette)

Guy: (better come up with something new, because he's already brought this up five times in the last hour, and he's running out of cigarettes, too)

Girl: (looking off in distance)

Guy: "Can I borrow your lighter again?"

Vonta Leach: The Reason He Isn't Sticking Around Is Because He Doesn't Suck (Like a Leech Would).

Vonta Leach will not be returning for a third year with the Baltimore Ravens, The Baltimore Sun reported Monday. The Ravens have until noon EST today to deal the nine-year veteran, lest they be forced to cut him for salary cap reasons.

If Vonta Leach is not dealt by noon Tues, he'll be released by the Ravens

Everyone who knows anything about the NFL seems to be convinced Leach will be cut. These same people are also convinced that Patrick Willis does in fact know the full name of "what's his name."

An unsurprising fan favorite in a blue collar city best known for Cal Ripken, its abundance of crabs and the honor of serving as the former stomping grounds of Avon Barksdale, the people of Baltimore will miss Vonta Leach, who has confirmed the news of his departure.

Thank @ravens organization for a great two years. I came here and did what we set out to do and that's win the Super Bowl. My time here

here is up but what we accomplished, we will be forever linked. Thank the fans for accepting me and my family to Bmore. #newchapter#samegoal

And if you were a diehard Ravens fan watching yet another piece of last year's championship puzzle parting ways due to cap issues, it was probably a little bit sad.

The former Texan is now a 31-year-old fullback looking for work in a league that has changed a lot since he entered it back in 2004. He played for Green Bay then, spending a couple of years with the Packers before making his way down to Houston. Leach spent five solid seasons with the Texans, leaving just when it was about to get good. Luckily for him, his timing was better in Baltimore.

He got a ring, after all, and he got paid $8 million for two years of work. The Ravens are going to cut him and take his $3 million base salary away from him before he can fulfill the end of the deal. If you're a fullback over the age of 30, and you can actually collect on almost 75 percent of your three-year contract, you're doing it right.

Jones-Drew Recovering From Same Surgery That Made Schaub So Fast.

Jacksonville Jaguars running back Maurice Jones-Drew held a news conference on Monday, one day before the start of the team's mini-camp. Jones-Drew won't be participating in that, as he is still recovering from a Lisfranc injury suffered last October. But he thought that a gathering of the media would be a good way to allow everyone to sort of get the questions about the Memorial Day weekend bar fight out of their systems. Then he refused to answer any questions about the bar fight, which he described as an "unfortunate incident."

This is a contract year for MJD, by the way. Everyone in Jacksonville should start saying their goodbyes.

You Know I Had To Mention This.

Unsurprisingly, the popular assumption is that this has all to do with taking one of Patriots offensive coordinator Josh McDaniels' old guys from Denver and giving him a shot in New England. Tebow's former Broncos teammate Brian Dawkins certainly saw it that way, adding that "Josh [McDaniels] is all about packages. That's what I remember."

I Used To Love Fried Okra.

Now it just reminds me of the Minnesota Vikings, in a very bad way.