Won't you read along as I do my best Brett Kollmann impression? The Texans beat the Broncos handily during their Week 3 showdown last year, but it was this key play that put them ahead and set the tone for the rest of the game. Let's take a look at how they did it.

This subscription to Game Rewind from NFL.com has been a godsend to cure my football cravings. It was pretty cheap but only lasts until the end of July. Got a play you'd like me to break down? Post it in the comments and I'll try to find it for a future post. And now let's get on with it... 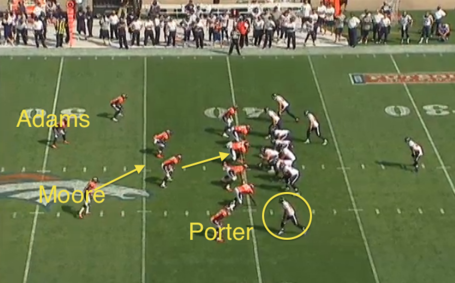 Down 5-0 and after two consecutive false start penalties, Gary Kubiak and the Texans decided to go big and to recapture the lead and momentum of the game. Below you'll see them in a bunch set to the right (Kevin Walter, Owen Daniels and James Casey) with Andre Johnson isolated to the left of the formation (circled).

The three players I've labeled are the most important Broncos to look at; they counter this Texans formation with a 4-3 under, cover 3 zone blitz. Inside linebacker Keith Brooking will blitz hard down the middle while safety Rahim Moore fills the gap left behind. Tracy Porter and Mike Adams cover the two-thirds of the field that are important to this play. 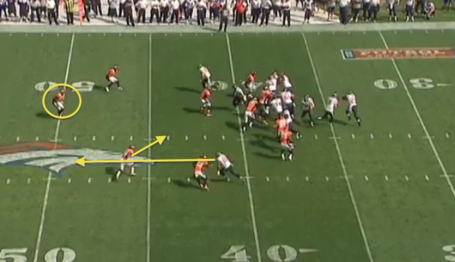 The ball is snapped and it appears to be a bread and butter zone run to the right. Casey even pretends to secure the backside but is really just adding extra pass protection for Matt Schaub. Andre starts his route slanting to the inside, then plants his foot and moves upfield along the hashmark. Despite playing close, Porter lets him run right by, trailing him from an outside position knowing he'll have a safety over the middle. Adams (circled) has only backpedaled a step and is clearly reading run so far.

Andre is flying right by Porter as Schaub finishes the fake and is already looking upfield. Adams, oblivious to Andre, is still looking towards the fake, waiting for Arian Foster to turn the corner. I've highlighted the rest of Andre's route here. Meanwhile, Daniels has popped out of the crowd as is running for the huge gap in coverage in the middle of the field.

Andre cuts left as Adams finally realizes the world of hurt he's about to enter. To his right, he sees Andre breaking to the sideline with Porter a few steps behind. To his left, he sees Daniels wide open. Moore is standing by himself, covering no one. Wesley Woodyard, realizing he's been fooled on the play-action (red arrow), is scrambling back to the center of the field.

Paralyzed by indecision, Adams backpedals a little more, not sure where to go but shading towards Andre. Perhaps he thought Schaub didn't have the arm strength to make the throw over the top. Adams decides to make a break on Daniels, who just stopped his route, right on the Broncos' logo, waiting for a pass. With a defender barreling down on him, Schaub cocks back and fires deep. 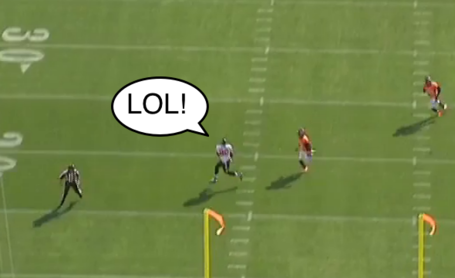 Adams realizes his mistake and is left even farther back than Porter, who never stood a chance without safety help over the middle. Andre even slows down a bit to wait for the throw and is still untouched on his way to the end zone.

The play-action is the Texans' most dangerous weapon, and now you can see why. If you've been following Battle Red Blog at all over the past year or two, none of this is new to you; I hope you enjoyed it all the same. If it was new to you, then I suggest you search Brett Kollmann's post history and read up on even more film study.

Again, if there's a play or game you want me to take a look at (from 2011 or 2012), put it in the comments. I'll choose one and make another post next week. Happy Thursday!