Stick with Battle Red Blog all summer as we look forward to the 2013 season. The Texans travel to Arrowhead Stadium to play the Kansas City Chiefs now headed by Andy Reid and quarterback Alex Smith. Will this matchup be as exciting as the last time these two teams played? Let's hope not. Get your premature evaluation here.

The last time they played:

As good as the Texans were offensively (3rd in yards) in 2010, they were equally terrible defensively (30th in yards surrendered), and it showed against the Kansas City Chiefs. Sadly, this was the game that ended the season for DeMeco Ryans with his Achilles injury and it spelled further doom for the defense in 2010. Running backs Jamaal Charles and Thomas Jones ran for almost 200 yards by themselves. Quarterback Matt Cassel threw for 200 yards and three touchdowns, two of them to Dwayne Bowe, who tallied 108 yards by himself.

Down by 10 and with less than seven minutes left in the 4th quarter, Schaub hit Owen Daniels on consecutive 20+ yard plays to drive down the field. Foster scored his second touchdown to bring the game within three for the Texans. The defense, which had allowed scores the last four Chiefs possessions, finally mustered some dignity and forced a punt to give Schaub a chance to win or tie the game.

And with 2:22 left on the clock, Schaub and Andre shined on an 80-yard game-winning drive that ended in this: 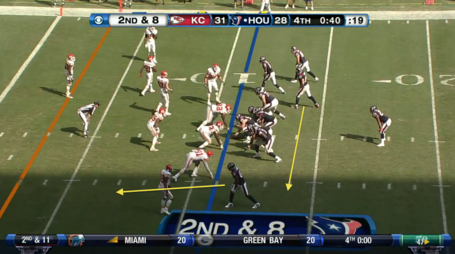 Remember this formation? Three bunched receivers to the right with Andre isolated to the left. Daniels comes across in motion before the snap to help Andre come open against zone coverage. 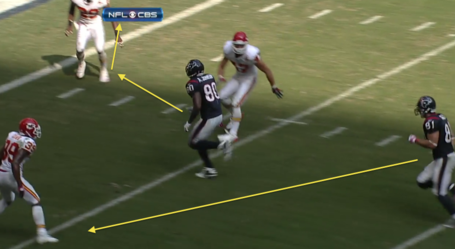 With two receivers against three defenders, it takes well-designed route combinations like the one above combined with the superior route-running ability of Andre to bust wide open for a score. Daniels runs to the flat, taking cornerback Brandon Carr with him to the sideline, thus clearing some room in the corner of the end zone. Meanwhile, Andre starts his route against two defenders. 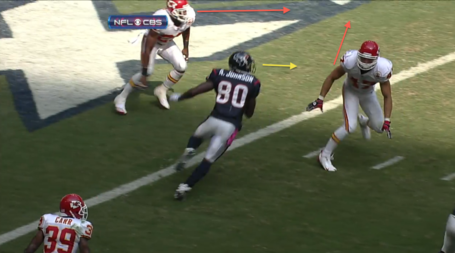 Andre starts his double move by breaking to the center of the end zone. His head-fake fools both defenders covering him. 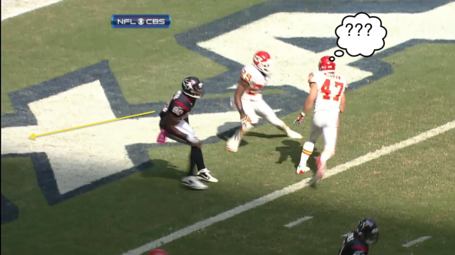 Andre stops his route and heads to the corner of the end zone. One safety buys the move so fully that he turns around completely to give chase. The other safety, Eric Berry, has his eyes on Schaub (who's currently scrambling out of the pocket) and momentarily loses track of Andre as he changes direction. Meanwhile, at the bottom of the screen, Daniels keeps Carr occupied and out of the end zone. 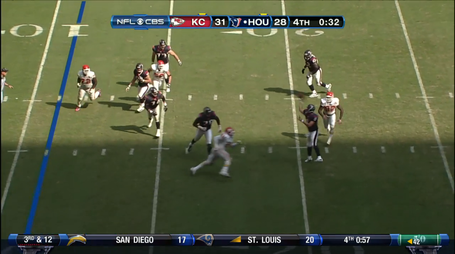 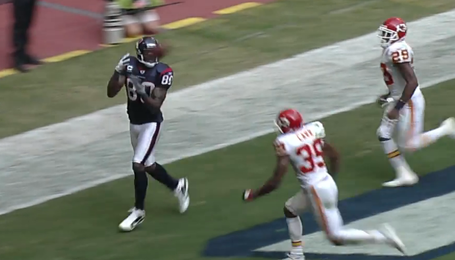 Schaub buys just enough time for Andre to break open and lofts a floater over the heads of Daniels and Carr for Andre to make the tip-toe catch in the corner. The Texans win in dramatic fashion.

Check out the highlights here and the box score here, if you're so inclined. The Texans are 2-2 all-time against the Chiefs.

How Kansas City finished the season:

What Kansas City has done this offseason:

The Chiefs also convinced Dwayne Bowe to stick around with a five-year, $56 million contract. LT Brandon Albert signed his franchise tag deal, which is worth over $9 million in 2013.

Meanwhile, Reid brings in Alex Smith from San Francisco to be the franchise's stopgap QB. Reid has a strong history with quarterbacks, so I expect the transition in systems will be smooth for Smith. Smith has some good weapons to work with, especially since Bowe was retained. Jamaal Charles is as explosive as ever and finished the 2012 season with more than 1,500 yards on a healthy average of 5.3 yards per carry. If Brooks Reed moves to inside linebacker, the responsibility of setting the edge against the run will fall to youngsters like Whitney Mercilus, Sam Montgomery and Trevardo Williams. Their predecessor, Connor Barwin, left big shoes to fill in run-stopping.

It's kind of a shame that Cassel didn't work out for the Chiefs. He had a remarkable season when the Texans faced him in 2010. But he fell off badly, of course, be it from his own shortcomings or the incompetence of the two regimes he played under. Either way, I'm curious to know what Chiefs fans think of their new "upgrade" in Smith.

How many games go by before Alex Smith once again hears his home crowd booing him? Week 7 against the Texans might be it. The Texans have the players on defense to neutralize the Chiefs' weapons on the outside. Bowe is a great player but so is Johnathan Joseph; it will be a great battle to watch. Anthony Fasano isn't scaring anyone down the middle (if he ever did), and a (hopefully) healthy linebacking corps will contain Charles to a modest day.

Thanks for the fun

I appreciate all the comments and discussions, been a year or so since i really got into a sbnation blog and debated… I may have lost… a lot, lol, but it was fun. Just to give my prediciton, for what its worth

Good luck, hopefully its a good game, and we meet in the AFC Championship lol, everyone has to have dreams

Do my job for me and post a well-written prediction or analysis. The best one gets put up here.

Brett Kollmann talks and we listen:

For the Chiefs fans in here, you are about to be throwing yourself up against what is called an attacking 5-2 front, which is almost entirely built to neutralize the run game. You have a great tackle tandem in Albert and Fisher, but you are also going against the most devastating pair of defensive ends in football, only one of which will be matched up against said tackles. The other will of course be given a solo match up against either Geoff Schwartz or Jon Asomoah, both of which is a huge advantage to the Texans. Beyond the end duo the Texans employ, they also have both outside linebackers on the line of scrimmage whose sole mission in life is to occupy the C and/or D gaps on either side to flatten out the run and buy time for the inside linebackers to make a play, which they pretty much always do. JJ Watt, our resident 5 tech end, is always given favorable matchups by virtue of the Sam linebacker playing in the 7 tech right next to him. Either the tight end doubles Watt and leaves the Sam completely unblocked to make the tackle, or the tight end blocks the Sam and gives the best defensive player in the league a one on one snap. Jake Long, Joe Thomas, Ryan Clady, Eugene Monroe, D’Brickashaw Ferguson, and countless other top tier tackles and not contained Watt, and I don’t think a rookie like Fisher will either.

On the second level, if you somehow happen to get a blocker free to engage someone, you have to go against two of the best run defending linebackers in the entire league in Brian Cushing and Brooks Reed. Cushing, easily a top 5 backer and arguably a top 3, can diagnose plays better than anyone else on the team and has proven to be more important to this defense than Watt himself. There is no run to the weak side that you can possibly run that will fool him. Right next to him is Brooks Reed, one of the better young "take on" guys in the NFL who has proven he can stack, shed, and tackle against anyone he faces. Reed was the biggest reason for Watt’s success, his Justin Smith to Watt’s Aldon Smith, and he should not be trifled with. Either you expend all your resources blocking Watt and Smith at the line and let Cushing/Reed destroy you unblocked, or you send Schwartz/Asomoah up to the second level on Reid’s typical power toss game and let Watt/Smith disrupt the play before it even gets doing.

On the back end the Chiefs will have to tangle with arguably the best corner duo in all of football in Joseph in Jackson, which despite Dwayne Bowe being a fairly good receiver, Jon Baldwin is not. There is no conceivable scenario to me with a finally healthy Jonathan Joseph (who was battling hamstring strains and multiple hernias in 2012) and a suddenly stellar Kareem Jackson do not shut down any and all outside passing threats. Behind them you have Ed Reed, who needs no introduction, and Daniel Manning. Together they make a solid safety duo, but when you throw in DJ Swearinger as our dime safety things start to seem a little bit unfair.

Jamaal Charles is a great running back, yes, but the Texans defense is designed to stop great running backs. This is not some New York Giants 4-3 under that leaves the strong B open all game to allow the guard to pull for easy power toss yardage. This is not some Tampa-2 spin-off that will take five yard runs here and there so long as you don’t throw a deep ball. Every single gap is being shot on every single play, and either you account for all five rushers or you suffer the consequences. The inside linebackers in Phillip’s scheme are left unblocked so often because the Texans defensive front is so incredibly dangerous that opposing offenses can't afford to not block any of them in favor of blocking on the second level. Brian Cushing basically gets to read and react unopposed, and for someone as big, fast, and talented as Cushing is there is almost no way to beat him. Everything is funneled to Cushing. Everything, and there is no getting around it.

Your receivers will be blanketed, your lines will be penetrated, your quarterback will be sacked, and there is not a damn thing Jamaal Charles can do about it. It's scheme vs scheme, and our system is literally built to stop your system.

Leave your thoughts and predictions below! Keep it classy in the comments, and please remember the community guidelines when posting.