The birth of a new technology is giving the people what they want: more Swaggg. "Boring videos will be unfollowed."

That Arian Foster is essential to what the Texans do on offense, courtesy of James Palmer at CSN Houston.

And here is a reminder that Arian Foster is probably the coolest dude in the NFL, courtesy of his photos from Costa Rica to my phone to your eyes. 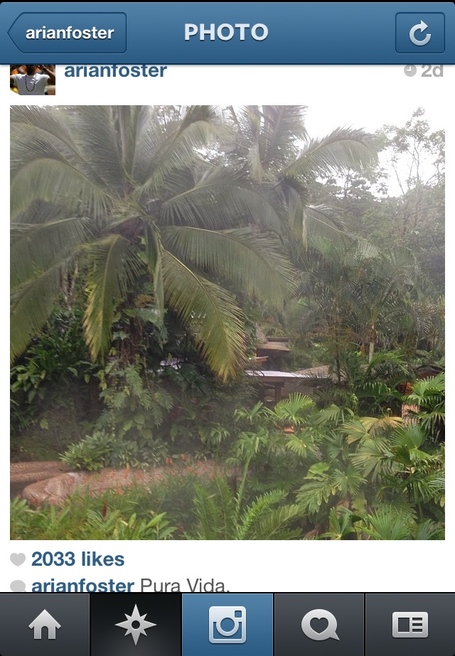 I know at least one loyal reader who will love that picture.

Instagram now has video. This is a fantastic thing for anyone as enamored as I am with the unparalleled confidence of Texans rookie D.J. Swearinger.

Unfortunately, I can't find a way to embed the videos, so you'll have to click on a whole link to reach them. I have no idea if you have to have Instagram or not to watch them. If you do, then this is the perfect incentive to create an account, even if it is "Facebook for girls," as Solomon would say.

As you can see, the man loves himself. Would you expect anything else from someone who answers to "Swag"? He even spells it with multiple, superfluous "G's."

Watch a shirtless D.J. Swearinger do what I assume to be the hottest new dance while singing the words, "all that Gucci."

Hopefully you won't get as bored waiting for these pages to load as Swearinger was while "koolin'" in his room with Sam Montgomery during the Rookie Symposium.

Watch D.J. Swearinger complain about being "locked down" at the Rookie Symposium.

The day Sound FX comes out with a Swearinger track will be a good day.

If You're Bored At Work And Have Headphones

You may consider giving this podcast from Shutdown Corner breaking down the Texans 2013 draft a listen.

Scroll down to the last paragraph of this story from The Baltimore Sun and read about how the Baltimore Ravens are still talking with the All Pro fullback they recently cut about coming back on a cheaper deal:

The Ravens are still quietly monitoring the situation with former fullback Vonta Leach. The Miami Dolphins appear to be the frontrunner for Leach, with the Houston Texans and Tennessee Titans also in contention.

But if the Dolphins were offering such an attractive package, Leach would have signed by now. The Ravens reportedly offered Leach a contact worth $2 million and loaded with incentives, but those close to Leach don't believe those incentives were realistic for him to reach.

Leach was expected to make $3 million this season before the Ravens recently cut him.

Where have I read this story before? Ravens cut ties with star player who happens to also be old. Texans reportedly enter the mix to sign him. Ravens then show moderate interest in him, causing Texans fans to want him even more.

That analogy is a stretch. I'm still wary of picking up anyone Baltimore doesn't want.

The much-anticipated arrest warrant for New England Patriots tight end Aaron Hernandez still has not materialized. (And there was nothing in that pond by his house, by the way.)

This is about as comforting to Patriot owner Robert Kraft's ears as was the pledge by Vladimir Putin last week. The Russian president vowed to replace the Super Bowl ring he stole from Kraft with a piece of custom made jewelry of precious metal and stones, "if [one of his four Super Bowl rings] is so valuable to him."

It goes without saying that if Tim Tebow becomes a star tight end in the NFL as a direct result of the licentious Gronkowski's back injury and the Cainish behavior of Hernandez, the Four Horseman and the seven-headed beast rising out of the sea are right around the corner.

Kirk Cousins: Pretending To Be Happy For The Man Who Makes Him A Backup

Kirk Cousins predicts that Washington Redskins starting quarterback Robert Griffin III will be ready to start Week 1. It really must suck to have to pretend for the world that he sees this as a good thing.