Unnecessary Film Study With All-22: Andre Johnson's Overtime Game-Winner Vs The Jaguars

Remember that amazing Andre Johnson catch and run that delivered an overtime victory to the Texans over the Jags last season? Here's a rather thorough breakdown of what went down on that play.

Share All sharing options for: Unnecessary Film Study With All-22: Andre Johnson's Overtime Game-Winner Vs The Jaguars

First off, take a look at the play in question, and notice just how effective it was-- Andre wasn't even touched. But how many times have you seen wide receiver screens like this one go for a loss? There's a reason this play worked out so perfectly. To appreciate how and why, we'll first take a look at a few plays before. 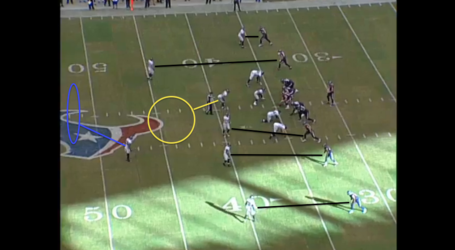 After tying the game late in the 4th quarter, the Texans forced a Jaguars punt and gave themselves a chance to avoid overtime and win the game. Above you'll see the Texans in a 01 personnel (0 RB, 1 TE, 4 WR) spread formation. Like they had all game, the Jaguars countered with nickel personnel (five defensive backs) in man coverage with a single high safety. Only the four down linemen rush Matt Schaub. At the very top of the screen is Andre Johnson paired up with cornerback Derek Cox in tight press coverage. 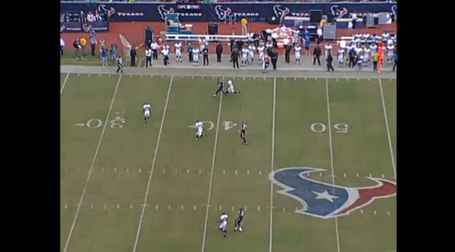 Above is the result of the play. At the top of the screen, Johnson blows right by the press coverage and makes the catch. Of course, Shayne Graham would miss the field goal a few plays later after an Antoine Caldwell false start, but that's not important. I only highlight this play as an example of the success the Texans enjoyed all game passing out of spread formations like this one. The Jaguars would change things up in overtime as you'll see below. 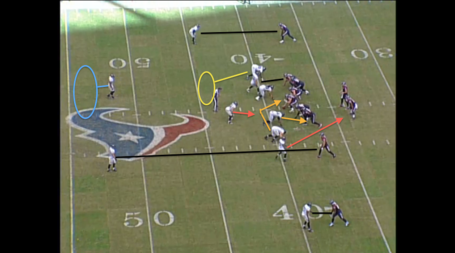 Fast forward to 3:44 left in overtime. The Texans are in 11 personnel (meaning 1 RB, 1 TE with 3 WR), while the Jaguars are disguising the blitz with their nickel package. No longer content with just rushing four and letting Schaub pick them apart, they sent a corner and linebacker to blitz heavily to the weak side. This is appropriately called an Overload Blitz. The strong side defensive end will peel back in a hook zone in an attempt to cover the middle of the field (where routes by Owen Daniels are commonly found).

At the bottom of the screen, you see Andre once again matched up with Cox in tight press coverage. Schaub sees this as well and hopes to replicate the play I showed you earlier. To Andre's right, you see Kevin Walter lined up in front of a cornerback about to blitz Schaub. Fifteen yards away is the safety in charge of covering Walter. 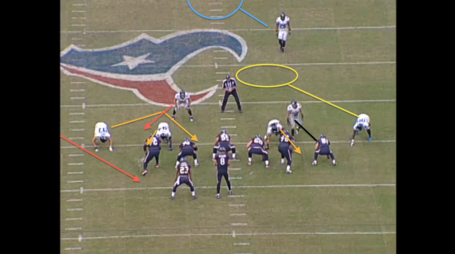 Here's the play from the back. Offscreen you'll see where the corner is coming from. On the left, defensive end Jason Babin will come to the inside with a stunt while the defensive tackle engages Duane Brown. The Sam linebacker is showing blitz up the C gap (between the tackle and tight end) but is actually in charge of guarding Daniels. The Will linebacker is in charge of Foster but with a catch: If Foster stays in to block, the linebacker will blitz. This is a nicely disguised blitz that, unfortunately, will end badly for the Texans. 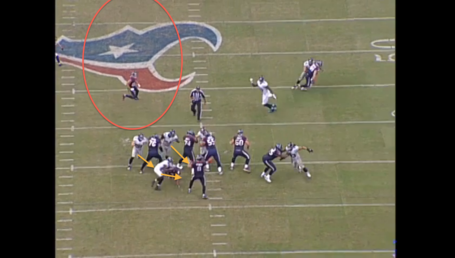 Fast forwarding about a second, you see the havoc the blitz is creating. Much credit should go to Arian Foster, who cut down the blitzing cornerback right before he got a chance to hit Schaub. And speaking of Schaub, he is forced to hurry a throw off his back foot because of the pressure coming. He cocks back and fires deep to Andre.

I've also circled the tight window that Schaub SHOULD have attempted to hit instead of throwing deep to Andre… look carefully for the circle. Can you see it? 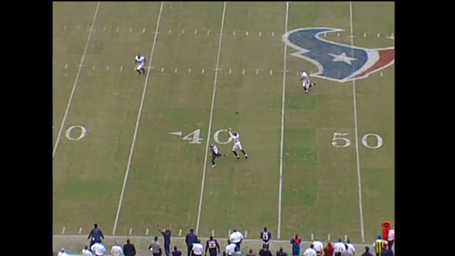 Much like in the first play, Andre has his man beat with safety help ten yards away, but Schaub's throw doesn't have enough juice thanks to the pressure caused by the blitz. Cox picks it off and returns it back to the Texans 47-yard-line. 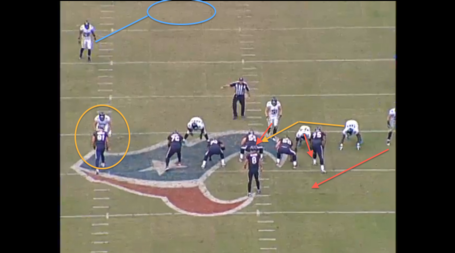 Thanks to Danieal Manning's football-to-the-groin style of defense, the Texans were able to get the ball back. Fast forward one play, and we see the Texans in another spread look with 01 personnel. The Jaguars are sticking with what worked before, but this time flipped to the other side. Circled is Owen Daniels lined up against Babin, who isn't bothering to crouch down. To the right, you can see the cornerback ready to blitz. Schaub should easily feel a blitz coming from the right. 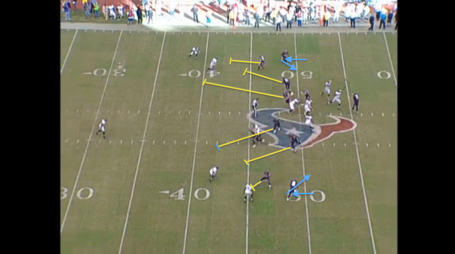 Here we see the Texans execute what's called a Double Tunnel WR screen. Derek Newton and Ben Jones sell their block for a split-second before moving up field to join Walter in looking for someone in the secondary to block. Andre is at the top of the screen with the nearest defender ten yards away, giving his blockers plenty of time to move in front of him while he catches the pass. On the other side, we see the same exact setup. Brown and Wade Smith break from their blocks to move up field to join Keshawn Martin in blocking for Lestar Jean.

This play gives Schaub the option to throw to either receiver depending on his pre-snap ready. Schaub reads the blitz coming from his right and makes the throw.

Andre makes the catch while Walter engages his man. Newton is about to maul his man to the ground and Jones huffs and puffs up the field looking to block the free safety. With so many defenders behind the line of scrimmage, all Andre has to do is run and let his blockers do the work. 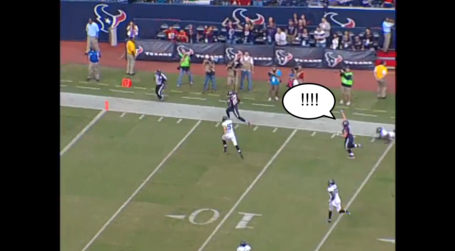 Originally I mean to break down this play and this play only, but I soon found that it had already been done here, so I set out to explain at why it worked so well. As someone who's a bit new to film study, it was great seeing the adjustments and counter-adjustments made by both sides leading up to this play.

Schaub owes the defense-- especially Manning's groin-- a great deal of thanks for bailing him out after that terrible interception, by the way.

You know the drill. Leave any thoughts, critiques and any plays you'd like to see me review in the future. Happy Thursday.