In today's Newswire, find out why Dobbins is a no-show at OTA's, what Tony Romo's back has in common with The Bob's, and which teams are dumb enough to take a chance on JaMarcus rather than VY.

The Houston Chronicle's Tania Ganguli spoke with Texans wide receiver DeVier Posey at OTAs on Tuesday. The subject was the status of his rehab from offseason surgery for a torn Achilles, suffered in the fourth quarter of the playoff loss at New England. Here is what he said:

"I should be out on the field next week doing drills and getting acclimated to the heat and getting my foot on that solid ground again."

"We're making a decision on [Posey] at the end of camp because of the PUP [Author's note: This means "Physically Unable to Perform," in case my girlfriend is reading] and those type of things. He's doing everything he can. He's going to come back and he's going to play for us next year. How early is the question."

Tim Dobbins, Meanwhile, Did Not Speak With Ganguli At OTAs.

Because he isn't there. But his agent spoke with Ganguli. Well, technically, they're just texting. It's complicated.

Dobbins isn't injured, he's just opted not to attend the Texans' voluntary workouts. His agent David Canter checked in to say this via text: "He's in the best shape of his life and he'll be at all mandatory events."

He's spent the offseason at his home in Nashville.

David Canter has also been all over Twitter defending his client's decision to skip the voluntary workouts that only one other veteran (Ed Reed, who is rehabbing from hip surgery) is missing.

You get his ass, Steph. We all know what happens to those who cross you.

D.J. Swearinger Looking For His Jane.

Either Tim Dobbins has become really good at football in the last few months, or David Canter is in a swag-off with D.J. Swearinger. 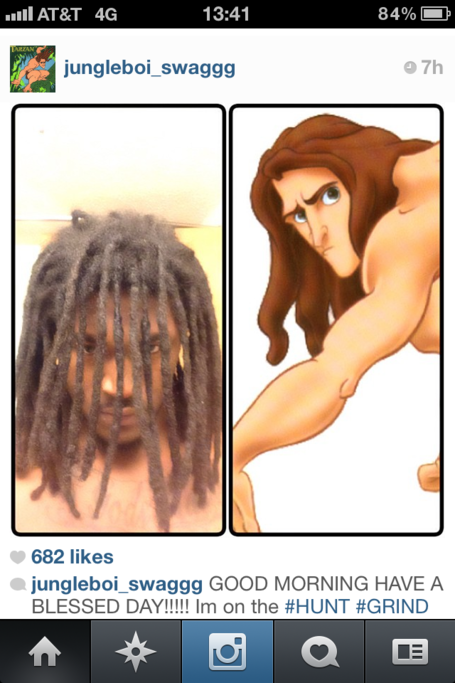 The man whose hip-hop persona transforms him into Jungle Boi - and who answers to Swag amongst friends old and new - is winning by a considerable margin.

Duane Brown Is A Large Man.

Starting the following story with "that moment when" implies that this is a universally understood thing.

No one relates to this, Duane.

EXCEPT FOR THIS GUY.

@duanebrown76HAVE HAD THE SERVER LOOK AT ME AND SERVERS ME TWICE THE FOOD THE PERSON NXT TO ME GETS EVEN THOUGH WE ORDERED THE SAME AMNT.

I HAVE NEVER UNDERSTOOD "WRITES IN ALL CAPS" GUY. WHY IS HE SO EXCLAMATORY? ALSO, DO PEOPLE UNDER THE AGE OF 70 EVEN DO THIS? I FEEL LIKE YOU HAVE TO BE THE KIND OF PERSON THAT TYPES WITH JUST YOUR POINTER FINGERS TO WRITE LIKE THIS.

BRENNAN WILLIAMS OUT UNTIL JULY.

THE THIRD ROUND PICK AT RIGHT TACKLE HAS NOT PARTICIPATED IN ANY TEAM ACTIVITIES SINCE INJURING HIS KNEE ON THE SECOND DAY OF ROOKIE MINICAMP. AN MRI SHOWED NO SIGNIFICANT DAMAGE, BUT MRIS DON'T SCAN FOR CHANCES OF TAKING DEREK NEWTON'S JOB.

Ladies And Gentlemen, The Offseason.

Knowing you're misusing the English language, then doing it anyway. Twice. That is real power.

Romo is still recuperating from the back surgery he underwent in April, though the pain is surely softened by the comfort of knowing he is still guaranteed $40 million by the Cowboys, thanks to the fat contract extension he signed earlier in the offseason.

The back surgery was to remove a cyst, by the way.

I don't know much about cysts. I'm sure Romo needed to remove his. But I'm just saying, The Bob has a cyst on his back, and it's awesome. He's had it since he was a teenager. It's like a miniature benign volcano, with puss instead of molten lava bubbling under the surface, and it only erupts when someone applies significant pressure to the base of it. That is typically a role reserved for The Bob's only son.

Mount St. Bob, as we I call it, has a range of up to around five feet in the air, depending on how long it's laid dormant. So you should keep your distance, especially as it stinks up the whole room. My sisters and my mom typically keep a distance of at least one to two rooms.

I wish I had a Mount St. Bob on my left forearm, so I could shoot it in Tony Romo's eye. It's probably unlikely that will ever happen.

JaMarcus Russell Getting A Tryout Or Three.

Chicago is interested for some reason. The former Oakland Raiders bust, reportedly looking svelte at 265 after losing 50 pounds, will head there on Friday. Baltimore is reportedly interested as well, along with a mystery team in the NFC West.

It's too bad I woke up this morning to read about the interest of those other two teams, because I had a perfect joke lined up for this:

The best of Da Super Fans on SNL (via J Ozz)

Hope You Have Verizon.

I don't, and I want to be able to stream games on my phone for the next four years.

NFL super agent Drew Rosenhaus has reportedly filed a grievance against Philadelphia Eagles wideout DeSean Jackson, claiming that his former client owes him over $400,000 in loans doled out between Nov. 2009 and March 2012. Jackson has been widely reported to be leaning towards joining Roc Nation, the new sports agency founded by Jay-Z. He denies that he's made a decision.

Meanwhile, that's what happens when you fire Drew Rosenhaus.

Luckily, Jackson can afford it.

The former Detroit Lion appeared in a Newport Beach, California court on Tuesday, his first public sighting since May 24. Young's attorney successfully petitioned the presiding judge to continue his client's trial until June 24. Somehow, Young still has not been evaluated by a psychiatrist, despite having been in jail since May 11.

This is how California rolls, I guess.

NFL Commissioner Roger Goodell just keeps dropping hints that placing a team in London may one day be a possibility. If your deduction skills are sharp, that would most likely mean the Jacksonville Jaguars. Twitter was ablaze Tuesday with reports that Goodell had said the Jags may soon start playing two "home" games a year in the center of the world.

Bart Hubbuch, the journalist who tweeted the news, quoted Goodell as having told him that there was a "good chance" of this happening "very soon." This- drew the ire of one particular NFL blogger, who alleged that Hubbuch had manipulated the commissioner's words. And then, this happened:

@nfldraftmonster Let's play a game of "Who the F are you?" I couldn't care less what you think of me, clown.

As long as we're all being professional about it.