Just ask Indianapolis Colts safety Joe Lefeged if he agrees with that favorite aphorism of my grandfather. Dude got outrun by some cops over the weekend, and had an unregistered gun in the car. Plus, real talk: is Ed Reed faster than Joe Lefeged?

Share All sharing options for: Houston Texans Newswire: Nothing Good Happens After Midnight

And thus begins the final month of the offseason where football can still feel really far away. These are the doldrums of any football blogger's existence, especially one whose output is directly tied to things happening in the news. There is nothing happening in the news of any interest that involves the Houston Texans right now. This is a good thing, though. Trust me.

Before you get a feel for why that is, I leave you with this: evidence that somewhere in the near vicinity of this north Austin Starbucks lives a man perpetually aggravated by John McClain. 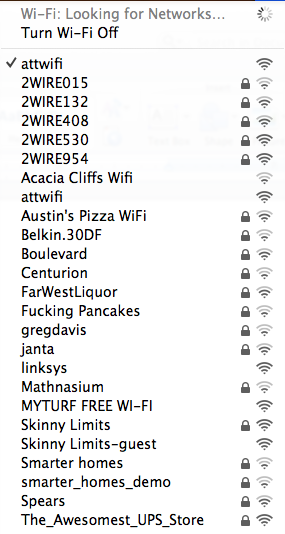 If you're having to look too closely, you don't get the joke. And it's not my place to explain it to you. Gotta ask bigfatdrunk on that one.

Bryce Brown Gets His Bitch Back.

Philadelphia Eagles running back Bryce Brown is about to be reunited with his pit bull and her seven puppies, a little over a month after they were seized from a suspected illegal dog-breeding center in Wisconsin by a local county human association.

I'm sure when Ellis and her puppies were seized, Bryce was all like:

DMX Where my dogs at (via hassmonta)

Brown contends that his dog (which goes by the name of Ellis, despite being female) was simply there for "stud services," which is a very nice way of saying "to be mounted doggy style and impregnated." No word yet on whether or not Brown will be giving one of the seven puppies to a certain teammate who wears #7.

How Are You Not The One Escaping On Foot, Joe Lefeged?

My grandfather used to say that "nothing good happens after midnight." This is debatable, of course, but in the case of Indianapolis Colts safety Joe Lefeged, this past weekend tallied a point in Old Man Parsley's camp.

Nothing good happens after midnight. Those words had to have been ringing in Lefeged's ears as the third-year player out of Rutgers was being arrested on gun-related charges at 12:05 a.m.

Why am I friends with someone as stupid as 23-year-old Aaron Wilson? Lefeged was hopefully also pondering that question as police were tightening the handcuffs:

Police say officers stopped the car for speeding and because one passenger, identified as 23-year-old Aaron Wilson, was standing completely upright in the backseat. After police repeatedly told the driver to put the car in park, the driver sped off, nearly striking officers who had surrounded the white convertible, police said.

Lefeged and another passenger were caught when they tried to run from the car in different directions, police said. The driver got away.

The same Joe Lefeged who made this return following an interception of Ben Roethlisberger was unable to successfully outrun a couple of D.C. cops.

And he is officially lef***ed as a result. Because after getting caught, police found an unregistered .40-caliber semi-automatic pistol "in plain view sticking out from underneath the front passenger seat."

Just fantastic decision-making all around, it seems, especially right after another guy named Aaron made gun charges the last thing any NFL player wants to deal with at the moment.

Also, that driver better be a recently retired Olympic sprinter.

Shaun Rogers Jewel Thief Turns Out To Have Been A Prostitute (?!).

And not the best looking one at that, considering we're talking about a professional athlete who is wealthy enough to roll on road trips with over $400,000 in bling.

The culprit, 25-year-old Subhanna Beyah, was arrested over the weekend by New York State Police. She stands accused of being part of a four-woman larceny ring that specializes in seducing men they meet at clubs, going back to their hotel rooms, drugging them and then stealing all their stuff. The ring works primarily in the Miami-Ft. Lauderdale area. Only one other in the group has been apprehended; the other two are wanted by police, which is why no. 1 Heat fan Flo Rida should be extremely cautious every time he come around the city. 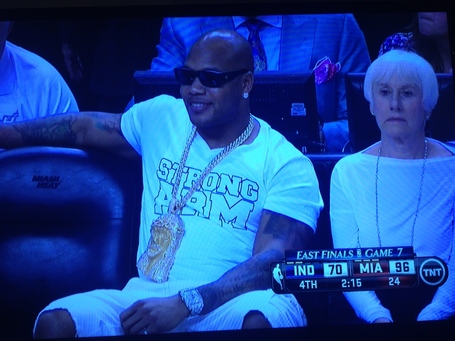 No. 1 Heat fan and no. 1 Christian, with a faith so shiny and gold no Medieval pope could even front.