Houston Texans Newswire: Every Day Is Monday For J.J.

Dear Derek Newton, J.J. Watt doesn't care that it's the weekend. That message could also be addressed to the Pouncey brothers, who are as smart as new Twitter celebrity Jasmine is appropriately dressed.

Share All sharing options for: Houston Texans Newswire: Every Day Is Monday For J.J.

Once again, a video message only available for those who take part in "Facebook For Girls."

And while we're on the topic of J.J. letting us know how hard of a worker he is, let's just compare his self-branding to that of Texans right tackle Derek Newton, who may or may not be ready to play on Week 1:

One morning. Two workouts. Nobody cares that it's the weekend. Rest is for retirement.

The weekend WAKE UP in a few...

Matt Schaub: "I Turned ESPN The Magazine Down."

Which is why the Mag went with Colin Kaepernick instead for "The Body Issue."

No, that isn't what happened. Kaepernick was the first choice. They did not ask Schaub.

Denver Broncos left tackle Ryan Clady signed a five-year, $52.5 million contract on Sunday, with Denver guaranteeing $33 million of that sum over the first three seasons. If the three-time All-Pro can make All-Pro two times over the course of the contract, the value of the contract balloons to $57.5 million in total.

Someone Please Explain This To Me.

D.J. Swearinger is getting too deep. 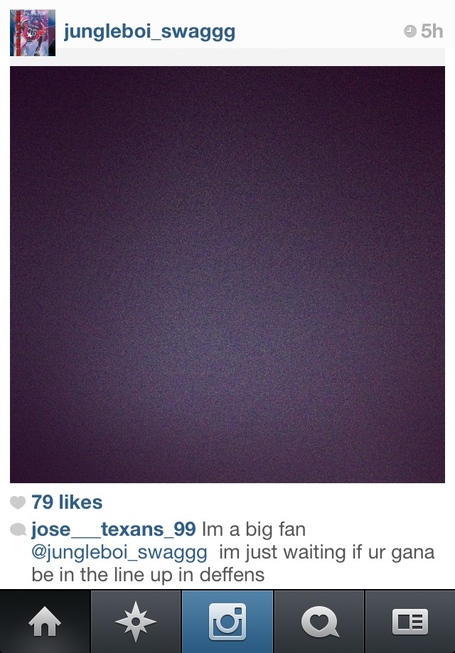 Unless you were camping in the Grand Canyon this past weekend, you heard about Texas A&M quarterback Johnny Manziel's early departure from the 2013 Manning Passing Academy. He was initially reported by some TMZ-esque site to have been hungover but, like any kid would do in his shoes, is now playing the dehydration card.

The Dallas Morning News is all over the scoop:

Texas A&M QB Johnny Manziel is "resting and recuperating from dehydration," according to his father, Paul Manziel. (Continued..)

Manziel's father said in a text message that Manziel is resting at home with his family and is not football-ready but is feeling better.

I promise an update on Thursday.

Who Knew The Dudes At ESPN Were So Hard?

Bristol, Connecticut, man. As we've all learned from this Hernandez saga, it's apparently pretty hood outside of the ESPN compound. Carlos Ortiz knew this long before the rest of us, of course. He grew up there, fathered his children there, and was boys with (alleged) town serial killer Aaron Hernandez.

Ortiz - known on the streets as "Charlie" or "Charlie Boy" - can probably never go back to Bristol now. This USA Today report makes it pretty clear why that is.

Here is just a small excerpt, a quote from his cousin Jose Torres, that will give you an indication of the way Charlie Boy's former neighbors and friends feel about him now:

"He can come back here," Torres said, "but if you come back to the streets where everybody thinks you're hard but you've been snitching ..." His voice trails off. He doesn't want to say the words.

Or his old pal Amber, who used to let Charlie crash on the couch:

"That's Aaron Hernandez," Amber Schryer said from the couch where she would let Ortiz crash. "You tell the police you don't know anything."

There will of course be several people who grew up in nice neighborhoods that will express shock at the idea that Ortiz would be shunned by his former friends and family for simply cooperating with the police. Luckily, I'm pretty much an expert on life in the ghetto, as I've seen all five seasons of "The Wire." I have also watched this famous clip of Carmelo doing his best to throw away all future endorsement offers:

So Charlie Boy should come to me for advice. And I advise him to become a Jets fan. He will need all the protection he can get.

Speaking of the most compelling offseason NFL story of all time, I hear there's some wall space freeing up in Canton. And so, the hunt begins for which photo will replace the image of a high-stepping Aaron Hernandez in the NFL Hall of Fame. On the short list of "Unlikely To Be Selected" are shots of the brothers Pouncey partying this past Saturday night.

As you can see, Maurkice and Mike, former college teammates of Hernandez who are both now on NFL rosters themselves, are idiots.

But at least it gives Brett's coworker a chance to strike up a conversation with the pretty young lady from "Aladdin."

Go get it, Billy. #perksofthejob

By the way, I was perusing Ms. Jasmine's Twitter feed and found that she is quite a fan of Mrs. Watt:

Don't shoot the messenger, J.J., but she's got a point.