The offseason is taking in its final breaths as it slowly withers away into nothing. Football is right around the corner again, with Texans rookies reporting to camp today. Take a peek at some of the new faces that may be leading the Texans into battle for years to come.

Houston, We Are Officially In #HUNTMODE

For today is the day that training camp begins. Sort of. It's the day that Houston Texans rookies report, which, for my new favorite player D.J. Swearinger, means the temporary end of his "turning up" with his homies in South Beach.

I know those quotation marks make me look really hip. I also know that like me, the majority of the people reading this post are salt of the earth types who have always colored inside the lines of life, and need the quotations to understand that this phrase means something else when used by Swearinger. 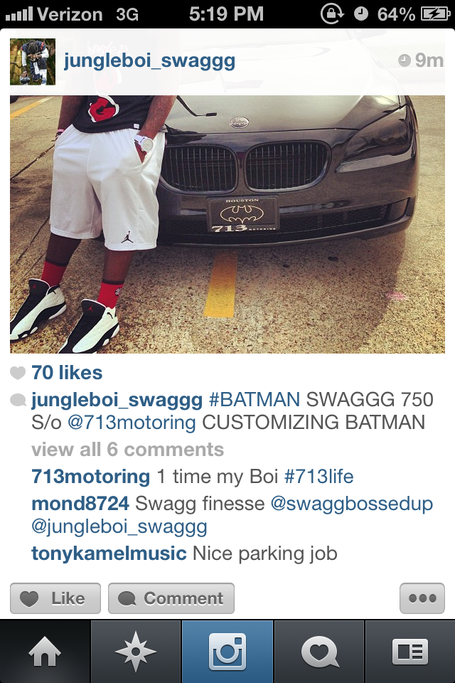 Swearinger doesn't believe in coloring inside the lines of life, clearly. And it's a philosophy like this that is going to lead to some entertaining moments for wide receivers coming across the middle this year. He may be the kind of guy who raps about swag and Versace at the moment, but soon his verses will be all about Roger Goodell stealing his money.

I love Swearinger because he makes me feel like a cooler person by association. For example, I now know that the kids these days are using "turn up" to mean "having a blast." For example, what you see at the 1:10 mark below is very much turning up:

Another example is getting three 15-yard penalties in one sequence and still finding something to celebrate:

Say what you will about this rough-around-the-edges young man from The Wood, South Carolina, but he has more to teach us about seizing the day than anything Joan Jett ever did. And that's a fact, Jack.

And Now It's Time To Learn Something About The Less Confident Rookies.

CSN Houston has been pumping out these rookie intro interviews like hotcakes the last few days, with a Q&A format led by an unnamed reporter who also seems like he may be a rookie in his own field. They're quick and informative, and are viewable below.

First up is tight end Ryan Griffin, a sixth round draft pick out of UConn.

Here is what I now know about Griffin that I did not know before:

1) He, like the unnamed rookie reporter, hates on Galveston beaches.

Hard to argue that.

2) Griffin had never touched a gun until moving to Texas. But of course, he is now a fan of them, having made his first ever trip to the range with rookie punter Andrew Shapiro. I'm not sure which is now a bigger stereotype: gun-loving Texans, or gun-loving NFL tight ends with Connecticut roots.

Let's get a Texans PR guy over to Ryan's locker after practice today, Gary.

3) While he has embraced the gun thing, Griffin has not gotten into the Texas cowboy boots and hat thing. From the way he describes it, it doesn't sound the hat is going to happen. He may eventually come around on the boots. For now, though, Griffin is "more of a Sperry guy."

While he and the Versace-repping Swearinger may lack in the things-to-talk-about department, Griffin will have lots of opportunities to reminisce on those awesome Storrs winters with once-and-current teammate Trevardo Williams, the outside linebacker taken by Houston in the fourth round.

Williams is also coming out of UConn, but wasn't born into the cold like Griffin. Williams is Jamaican. He didn't move to the States until he was nine. You can kind of detect the faint trace of the island accent he still has, something that reggae fans like me wish was much, much stronger.

Next up is offensive tackle David Quessenberry, a sixth round choice who has already been featured in one of my all time favorite Newswires for the role his stolen F-350 played in transporting undocumented workers across the border from Mexico.

Quessenberry likes Whatburger, In-N-Out Burger and the continent of North America, in ascending order. (On our continent: "It's awesome. We live in an awesome place.")

The San Diego native was also a history major at San Jose State, and wants to be a history teacher when he's done playing football. This fact officially catapults David Quessenberry into my top three favorite Texans.

Moving right along is the segment on undersized wide receiver Alan Bonner, a sixth-rounder out of Jacksonville State that few had heard of when his name was called during the draft.

Bonner loves movies, "Friday" in particular. He is also boys with St. Louis Rams first round pick Alec Ogletree, who played on the same high school team as the less-heralded Bonner.

Bonner may be the man who saves Joe Marciano's job this season, by the way.

Will Everyone Please Leave J.J. Alone?

Houston! Just landed & immediately reminded why I love this place. Best fans out there. Make it kinda difficult to do stuff, but I love ya

I have never seen such a diplomatic way of asking that question.

To all the Texans fans out there who don't think there is any real news going on this offseason, I present you with an image created by Steph Stradley, the #TexansCoolMom who turned #Schaubnado from an abstract concept to a piece of modern art destined for the Menil. 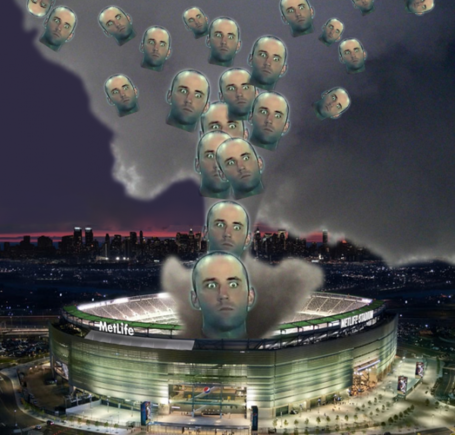 I know at least one Battle Red Blog writer who will appreciate that. But in case you don't find Sharknado references on a football blog aesthetically pleasing, you can always read her defense of Schaub piece here.

And he's also got the Schaubnado's back.

1) I ran into Jacksonville Jaguars wide receiver Jordan Shipley at a bluegrass show in Austin the other night, a scene he frequents pretty often, as he and his wife are aspiring country musicians.

First off, the show was awesome. Anyone who likes bluegrass should definitely check out the Austin band Wood and Wire, especially as the lead singer is a huge Texans fan, and also a former high school teammate of preseason Texans legend Chris Ogbonnaya.

Secondly, I overheard a band member telling Shipley after the show to "kill it" in Jacksonville this season. Seizing the opportunity to act like Shipley and I are good friends, I came up from behind, put my hands on his shoulders, and said, "Ehhh, let's not kill it too much. Second place in the AFC South is fine."

This earned me a handshake and a, "See ya later, man"/point when Shipley departed a few minutes later.

Anyone who was previously worried that the Jaguars posed a threat to the Texans' chances at a divisional three-peat, you're welcome. No way it's happening now.

2) I made it onto the local news today while waiting in the two-hour line for Franklin BBQ, but unfortunately was not wearing my Texans hat in the most successful videobomb of my career. (It was on my head the entire drive to the restaurant, but when my girlfriend realized she had forgotten her sunglasses, there went the hat, replaced by my extremely orange Lastros cap that was lying in wait in the trunk.) 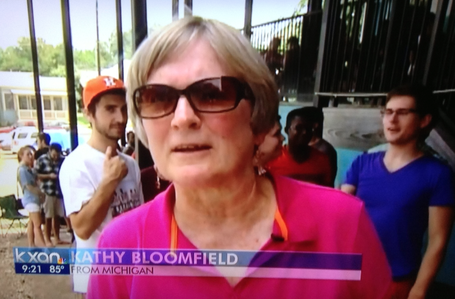 Would have been a perfect plug for the upcoming Texans season. May have even been featured on the ticket stubs for the Patriots game or something, seeing as I took the opportunity to remind the Pats fans behind us in line for those two hours that we no longer fear their formerly terrifying tight end corps.