That has to be the explanation for why Sam Montgomery is on the PUP list for the start of training camp. Otherwise he has no excuse for not being sick with dat #GRINDFLU.

Share All sharing options for: Houston Texans Newswire: Sonic Eating Too Much Sonic?

How Can I Stay Mad At You, Sam?

Even though you had only one job this offseason - making sure that you're in shape, as you are a professional athlete - you're just so weird that you're okay in my book.

That being said, I'm a little bit concerned that Sam Montgomery lacks the warrior mentality you need to make it as a starting linebacker in this league. What if Brian Cushing goes down again this year? Where will we be then? 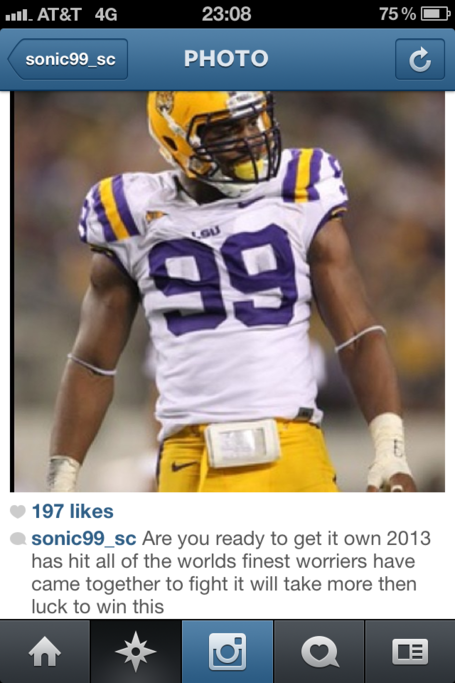 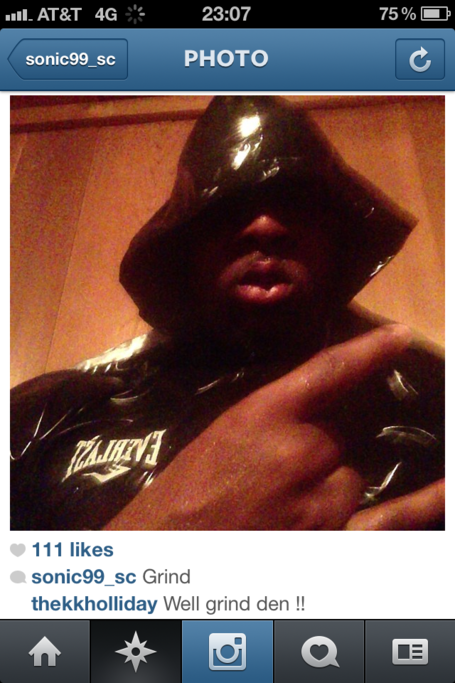 Or maybe I simply know that Sam Montgomery has one job: to get sick with dat #GRINDFLU.

You could spend the entire rest of your day searching for a better quote than that, and you wouldn't find one. While it's not exactly the correct usage of the word "racist," Brennan Williams gets an A for trying, which is more than we could say about other people in his draft class.

Despite his effort in the interview room, we were dealt the bad news on Tuesday that Williams has officially been declared physically unable to perform in training camp.

#Texans announce rookie OL Brennan Williams will start training camp on PUP. Had his knee cleaned out this offseason.

Which kind of sucks.

That leaves this guy (Derek Newton) and another rookie, David Quessenberry, as the two most likely options to battle it out for the starting right tackle spot to open the season.

If Williams is on PUP after 2nd roster cut, he will remain on PUP until at least day after conclusion of Week 6. Couldn't play until Week 7.

Let's face it: this is probably not the worst news that Brennan Williams has ever heard. The guy seems totally content watching pro wrestling and anime to be too torn up over the fact that he may be off for not only the rest of the summer, but all the way through Week 7, when the Texans travel to Arrowhead to take on the Kansas City Chiefs.

Stock tip for our readers with eTrade accounts: buy any company that produces leather armor-making kits and/or sword-making kits immediately, and short it the minute our game against the Rams ends.

Quick. Someone Tell These Texans Cheerleaders That They're Standing On Contaminated Sand.

It can't be healthy to spend that much time on a Galveston beach. 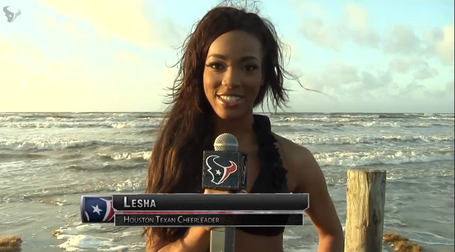 Shelbie seems to have internalized this fact, which explains why she opted for the kitschy horse prop. 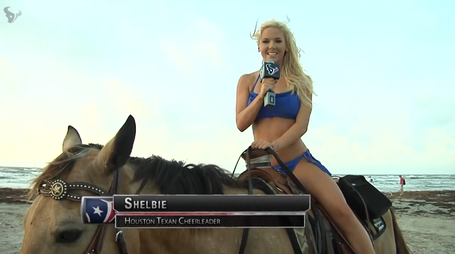 Mad props to my fellow Strake Jesuit Crusader Drew Dougherty on getting to say, "This is what I do for a living."

You're a true man for others, Drew, and I don't know how you haven't made it onto this list yet.

Go Ahead. Keep Defending The Redskins.

Unlike piracy, the name of everyone's second-least favorite NFC East team actually is racist, and now two of the greatest players in Redskins franchise history are speaking out about this self-evident truth.

Go ahead, click on the comments tab. Let it fly. Let the waves of comment hate come crashing down upon my electronic personage like the tar-filled surf of a Galveston beach.

The Denver Broncos middle linebacker who nearly removed the head of the undisputed ninth best quarterback in the world is now a former Denver Bronco.

With Sam Montgomery's one job currently waiting to be completed, perhaps there is still a chance Mays gets a call from Rick Smith regarding a relocation to Houston.

Tom Brady Is Tired Of Talking About It. 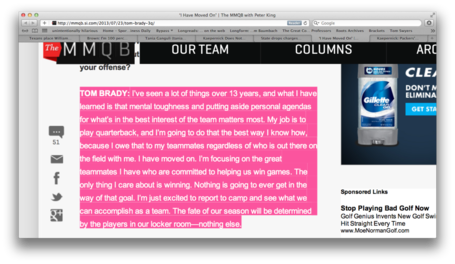 I opted for the screenshot of his quote from a short Q-and-A with Sports Illustrated's Peter King because I really wanted to bring to everyone's attention the fact that the new MMQB site has made the bizarre choice of going with pink as the color that appears when you highlight things.

Could have sworn there was an unspoken agreement that it was only manly to use that color in September.

Breaking News: Colin Kaepernick Is Adopted And Has Tattoos.

We get it. He's pissed his mom gave him up for adoption, and his tattoos are important to him.

Best part of this story is when the Dolphins No. 1 Fan/49ers quarterback describes a bickering Green Bay defense imploding during the NFC divisional game last year:

"It got to a point," [Kaepernick] says, "where we could hear [the Packers' defenders] arguing while we were in our huddle. ‘You're supposed to do this,' or ‘You have to do this, then the other.' At that point, our offense was like, It's over. As soon as you start turning on your teammates, you're not going to be productive. You know you have them in the palm of your hands."

While We're All Still Here...

Pretty much everyone here knows about the infamous #swagggjuice that our future starting safety has pledged to bring to the historically staid Houston Texans organization. 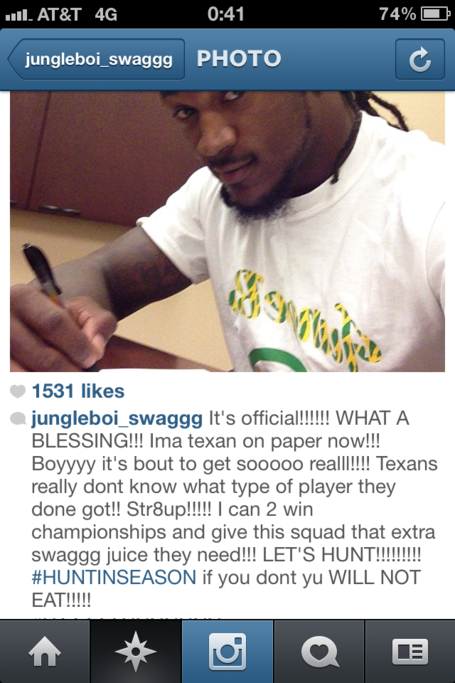 Pretty much everyone here also knows that Swearinger moonlights as a rapper, and a not-half-bad one at that, with a stage name of Jungle Boi.

But has everyone here seen the pictures of the clothing line with which D.J. holds a loose affiliation? 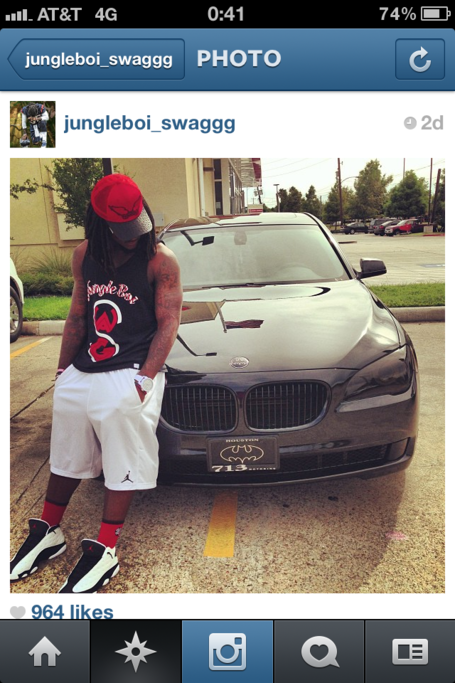 The clothing line is called SWAGG, which is one G short of winning a Swearinger-run spelling bee, and thus right up Steph Stradley's alley.

They've got a whole line of their standard fare, which are soft-looking t-shirts that bear their self-wise logo. These are cool, but require too much swag for someone like me to pull off. Then, there is the SWAGG offering that is going to make @PatDStat's freaking day.

So what, I might get a Swaggg shirt when they go on sale. 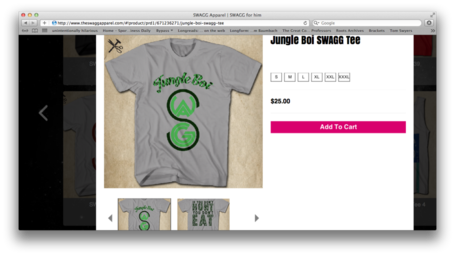 I've already emailed them about getting this thing made in Battle Red and Steel Blue, and you should, too. Because after all, if you don't hunt, you won't eat.