Finally, stuff to talk about. Check out today's Battle Red Newswire for all the Texans you can handle.

Share All sharing options for: Houston Texans Newswire: The Joy of Camp

I mean, just look at what I wrote on July 24, after new Texans inside linebacker Joe Mays was released by the Denver Broncos.

With Sam Montgomery's one job currently waiting to be completed, perhaps there is still a chance Mays gets a call from Rick Smith regarding a relocation to Houston.

And people say my writing is superficial and devoid of any intelligent discussion of football. Please.

One job, Sam. You have one job.

All Publicity Is Good Publicity.

Unless it's terrible publicity, with really well-delivered burns that are impossible to refute at times. Then that is just terrible.

Deadspin's Drew Magary delivered the Houston Texans installment of the "Why Your Team Sucks 2013" series on Monday, and it made me sad face to have no rebuttal to many of his points, such as:

Your 2012 record: 12-4. Only four of those victories came against teams with winning records. When you win the AFC South, you amass the majority of your wins in the bowels of CBS's Sunday afternoon schedule, with Bill Macatee on play-by-play and some sort of talking walrus doing the color commentary. Whenever the Texans were let out of that broadcasting spiderhole to play a REAL team (Packers, Patriots) last season, they were obliterated.

Your quarterback: Angry kabob vendor Matt Schaub, who is quarterbacking's version of a pitcher who "gives you innings." You have already seen the best of Matt Schaub. He will get no better. You know how Joe Flacco is a boring quarterback who magically improves in the postseason? Matt Schaub is just like that, minus the magic part.

That's all right, though, because Texans fans aren't REAL fans. Come on, 30-year-old dude in a Foster jersey. You're not fooling anyone.

Thank God I'm only 29. That could have been embarrassing.

I know you can't possibly love your team as much as someone who actually grew up with his team. I salute you for trying, for ACHING to replicate the kind of passion and devotion that can only be forged in the crucible of your childhood. But you know it's a futile effort. You ever make friends with someone when you're a grownup and you think that you've made a real connection and that you're gonna be buds for life and then you meet one of your new buddy's childhood friends and they have an effortless rapport and a treasury of shared memories between them that you can't possibly begin to match? That's what being a grownup Texans fan is like.

So don't bother trying to tell me you're "long-suffering" or "diehard" or any of that nonsense. Browns fans spit on you. You are actors.

You are playing the ROLE of the diehard fan when you can't possibly ever be one. If the Texans had reclaimed the nickname Oilers, maybe it would have been a different story. Instead, they chose the dumbest, lamest nickname in all of team sports, which is why they deserve their counterfeit fanbase.

Once Schaub and Foster and J.J. Watt are gone and the team sucks again (and it will), you'll flee Reliant Stadium within seconds, retiring back to your Houston sweatlodges to polish your guns and kick Katrina refugees in the shins.

Okay this really isn't true, though. We sold out for years when David Carr was our number one star.

Why your team doesn't suck: Hey, Ed Reed is here! Sure, his body is decomposing before our eyes, and he's probably cashing in on his last chance to get a decent free agent contract. But at least the Texans managed to buy themselves a little bit of fake championship gloss. HE'S LIKE A COACH OUT THERE ON THE FIELD!

Despite the fact that he has sucked at coaching special teams for years, Joe Marciano remains the team's Special Teams Coordinator. This is the guy who gave up on Jacoby Jones and Trindon Holliday, only to see them immediately ascend to stardom as return specialists with their new teams.

Marciano appears unfireable. He must have pictures of owner Bob McNair involved in some truly loathsome and illegal sex acts. Nothing else explains how he has kept his job since the franchise was born. He even got a game ball last season, when most rating services ranked the Texans STs last in the NFL.

How much better would the Texans be without this field position albatross around their necks? We will probably not know until either he or McNair dies, because apparently no head coach has the authority to dump his sorry ass.

Your coach: Gary Kubiak, who always makes sure to tip his hairdresser a little something extra any time she gives him the "Full Saban." Now flip up that microphone so you can do some real face-to-face yellin', Coach!

Sorry, Drew, but you're just wrong on this one. Check out this shot of the latest Kubic hair: 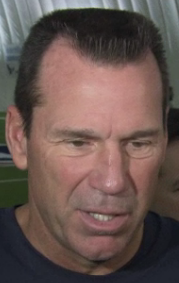 Easily best moment: Myers got after Antonio Smith for a play and during the ensuing scuffle, Swearinger jumped up & down screaming #Texans

Couldn't tell you what Swearinger was screaming, just that he was. He's going to be fun #Texans

Rookie safety DJ Swearinger was apparently goaded into freestyling on command for tv cameras. Heard it was pretty good. #Texans

Here it is, Tania:

That may be the first time I've ever seen D.J. Swearinger look sort of shy.

Darryl Sharpton got an injection this morning and they'll evaluate him further on Wednesday. #Texans

Training camp injections are the worst kind, too.

From Dave Zangaro's Fingertips To Your Eyes

The most fun drill with the pads on is always the pass rush drills, where an offensive lineman goes 1-on-1 with a defensive lineman.

Willie Jefferson had another good day, showing his quickness in this drill. He beat Andrew Gardner with some quick speed moves but was swallowed by Duane Brown later.

J.J. Watt shows his dominance here. First, he used a nifty move to go around Brandon Brooks and then he went straight through him the next time. But give Brooks credit, he was able to shut Watt down (relatively) the next go-around. He's probably the only guy on the team strong enough to have a chance against Watt.

In the same drill, Trevardo Williams has struggled. His outside move just hasn't worked and he's been getting flattened.

With full pads on, Swearinger and Eddie Pleasant combined for a hard hit on running back Ben Tate. Danieal Manning also had a nice strip of Tate early in 11-on-11s.

Kareem Jackson made a nice play to break up a 10-15 yard pass to DeAndre Hopkins. He jumped up and tipped the ball away but Hopkins didn't make a good enough effort to come back to the ball.

Case Keenum had a rough morning, sailing a few throws over receivers' heads. His best throw came on a deep pass down the sideline to EZ Nwachukwu, who dropped it. But Nwachukwu has blazing vertical speed and has been fun to watch.

If You Haven't Heard Of Willie Jefferson Yet...

Allow me to introduce you to the former Baylor wide receiver-turned-Texans outside linebacker that everyone is raving about these days:

Jefferson's undersized frame may relegate him to the practice squad this season, but his raw skills, speed and quickness may catapult him into an NFL career, something that seemed pretty unlikely when he was getting kicked off the team at Baylor for doing hoodrat stuff with his friends.

All that blazing behind him, Jefferson now seems to have the focus that is needed to take it to the next level.

Ben Tate Is In A Contract Year.

And he is a regular at Texans training camp.

This guy was at #Texans' AM practice today. Didn't have the full getup on, though. pic.twitter.com/JvCeCZofSr

And no, I don't think he actually bears a resemblance to either one, but you should still get the reference.

Jacksonville fans had reason to be excited for a few hours on Monday, only to hear that Blaine Gabbert's injury is not expected to be serious.

I was walking out of an Austin convenience store on Sunday, and right as I opened the door, a man wearing a Battle Red J.J. Watt t-shirt walked in. I held the door for him, naturally, and told him I liked his shirt. He said thanks, and entered the store, likely planning to buy something with money earned while working.

Not three seconds later, as I opened the driver's side door, a raggedy-looking man covered in low quality tattoos asked if I could spare any change. He was wearing a Tony Romo jersey. I said no, and drove away.

While We're All Still Here...

We Come From Good Stock.

My cousin Robert and his all star team from Post Oak Little League in Houston open up play in the 13-year-old Little League World Series tonight. He got interviewed on the local news out there in NorCal, and is just making the Parsley family look so well-raised.

If and when their team makes it to the national championship game, you can watch it on ESPN.

Oh, and this is the kid that made me my 100 percent duct tape wallet with a Texans logo embedded. And it's the kid whose 11-year-old brother just won the state championship for his all star team last week.

It's just Parsley genetics, man. What can I say?