The last time they played:

Lots of notable events in this game: Mario Williams tore his pectoral muscle and missed the rest of the season, Lawrence Vickers dropped a potential game-winning touchdown, Sebastian Janikowski set an NFL record with three 50+ yard field goals in one game, oh, and the ghost of Al Davis helped the Oakland Raiders stop the Texans on the final play of the game. Have a look below: 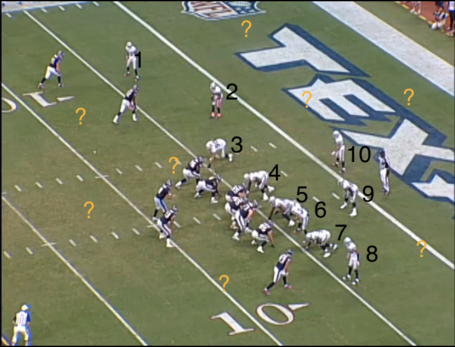 Above you'll see the setting of Davis' last hurrah. Clearly, there are only 10 Raiders on the field, so where's Davis? Your guess is as good as mine. He could have been lined up offsides for all we know. Very sneaky, Mr. Davis.

We all know the turnout of this embarrassing play, but you should check out the highlights and lowlights here, all the same.

The Texans are 5-2 against the Raiders all-time. Woohoo!

How Oakland finished the season:

Offensive coordinator -- and former Texans QB coach-- Greg Knapp lost his job after just one year because of the performance of his offense in 2012. The zone running scheme he installed led to the 28th-ranked rushing attack, but Carson Palmer had a surprisingly decent season passing the ball. Like Knapp, Palmer won't be with the team in 2013.

Head coach Dennis Allen seems to have the confidence of general manager Reggie McKenzie and owner Mark Davis, perhaps giving the position some stability that it hasn't enjoyed in quite some time.

What Oakland has done this offseason:

Defensive coordinator Jason Tarver, who had tons of success coaching Stanford's football team, managed to keep his job in 2013 and now has former Houston Cougar D.J. Hayden. Hayden will fight for playing time against veterans Tracy Porter and Mike Jenkins. The Raiders would be wise to bring him along slowly. Charles Woodson will likely slide into a safety spot alongside Tyvon Branch.

Sticking with the defense, the Raiders ranked 31st in the league with a mere 25 sacks last year and have done very little to address that in 2013. Lamarr Houston and Desmond Bryant led the team with four sacks each. Rookie Sio Moore displayed some nice versatility in college, rushing the passer on third downs, but other than that, the Raiders seem ready to move forward with the pass rushers they have now. Short of Richard Seymour inexplicably re-signing with the team, the Raiders have very few options left to improve their pass rush.

The quarterback battle seems to be headed by Matt Flynn, who finally has a chance to become a full time starter, but he'll be without Heyward-Bey and underrated tight end Brandon Myers. Can Jacoby Ford and Denarius Moore be a successful one-two punch at wide receiver? Terrelle Pryor will battle it out with rookie Tyler Wilson for the backup job. Pryor did show a bit of promise late in the season in 2012 and could possibly be used in a zone read option package for the Raiders.

Olson will also be going back to a power running scheme for running back Darren McFadden who had another injury-plagued season in 2012. McFadden oozes talent but, sadly, has yet to play a full season in his five-year career.

Also, have you seen their left tackle Jared Veldheer? The dude is enormous.

Raiders fans must be filled with hope after so many changes to the roster and coaching staff. I think the run game could take some major leaps, but it'll be remarkable if McFadden is healthy by Week 10 to face the Texans. Jacoby Ford and Denarius Moore are pretty exciting playmakers and could take the top off the Texans' defense if Matt Flynn can throw it far enough.

That's about as much optimism as I can stir up for the hapless Raiders. I'll be cheering for Flynn to have success in 2013, but he's going to have a rough go of it against the Texans. Matt Schaub should have a field day throwing the ball against an anemic pass rush and middling secondary. I'm thinking a few players still remember the sting of that loss back in 2011. I'm thinking blowout.

prior to the game

Raiders fans will hold a seance where they will sacrifice the heart of a man who’s soul is black as night (Bud Adams), the skin of one who can do no wrong (Brady), the spleen of one who can do no right (Samchez), and the blood of a virgin (Tebow). They will burn these at an alter made of the bones of all the chicken wings Madden has eaten since 1972 and they will summon the ghost of Al Davis to posses Flynn and lead the team to victory.

Post a well-written, insightful, or funny analysis, prediction or rant in the comments. The best one will get put up here.

Read more about the Oakland Raiders over at Silver and Black Pride.

Leave your thoughts and predictions below! Keep it classy in the comments, and please remember the community guidelines when posting.

Check out Weeks 1-9 of my season previews here.