Defenders question what's left in the tank for Andre Johnson, Victor Cruz signs with Giants, and more in this edition of the Newswire.

Johnson Has Lost a Step?

National Football Post's Len Pasquarelli took a look at the Texans' attempts to build up their receiving corps as Andre Johnson passes the decade mark as an NFL pro. Pasquarelli went as far to say -

The 10-year veteran still rates among the NFL's premier wideouts - he started all 16 games in 2012, the first time that has occurred since 2009, and posted 112 catches - and there has been no real discernable drop-off. But some opponents suggest that Johnson has lost perhaps a half-step, and isn't as explosive. Johnson had only four touchdown catches last season, his fewest since 2002 in a season in which he played at least nine games.

Yes, Father Time catches up with us all, but to Johnson? Maybe only little bit. Defenses were able to roll their coverage to #80's side of the field with even more confidence then ever before last year. Who was going to test to the defense opposite Johnson last season? BRB, do you think Andre Johnson has lost a step?

Training Camp is Just Around the Corner.

Ryan Wilson of CBS Sports gives us the rundown on the Texans going into training camp. No surprise the biggest concerns and questions marks surround Ed Reed and Arian Foster's health.

Straight and to the point, I like it. This may be a reference to a curtain development in basketball free agency, but we'll get to that later.

The National New York nightmare is over. Victor Cruz and the Giants agreed on a five-year, $43 million deal to keep him in red and blue. Cruz succeeded where Wes Welker and Danny Amendola failed - using his leverage to become the highest paid slot receiver in the league.

Soon, football will walk out of the desert and back onto a practice field. Our thirst for running, passing, blocking, tackling, and kicking will soon be quenched. For now, a question for each team going into training camp.

NFL and NCAA in Bed Together.

The NFL is exploring the idea of preventing players who are academically ineligible coming out of college from participating in the NFL Scouting Combine. The league seems to cherry-pick who it wants to reprimand coming out of college. While I don't disagree with the concept, I do believe the NFL is overstepping its bounds. What's your opinion on the matter?

Come With Me If You Want to Arrest.

Former Dallas Cowboys linebacker Dan Connor was arrested over the weekend in Philadelphia. He was found to be in position of a switchblade while going through a security checkpoint. Normally I wouldn't touch this kind of story, but the word ‘switchblade' caught my eye. When I think of switchblades, I think of this. Which begs the question - was Dan Connor ready to start a ‘Beat It' Style knife fight?

I've talked too much about Dwight Howard and the Rockets on a football site. But, I'm just going leave this here. 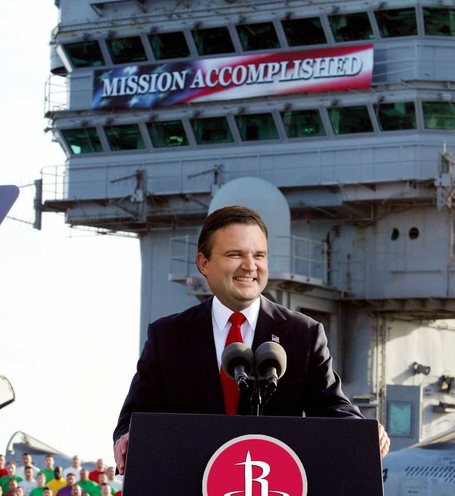 Keep up to date with Rockets over at The Dream Shake.